Quirk by Gibsons Games - A Review

A couple of weeks ago we shared a review with you of Pass the Bomb! The Big One! by Gibsons Games and I am therefore delighted to share another of their games with you today, which goes by the name of Quirk!

Quirk! is a fun game of sounds, actions & mischief and is recommended for children aged 5 and above. It can be played by 2-6 players and each game has a duration between 15-60 minutes to play. It is the ideal game for families to enjoy together and provides plenty of fun and silliness, that is quite hilarious. 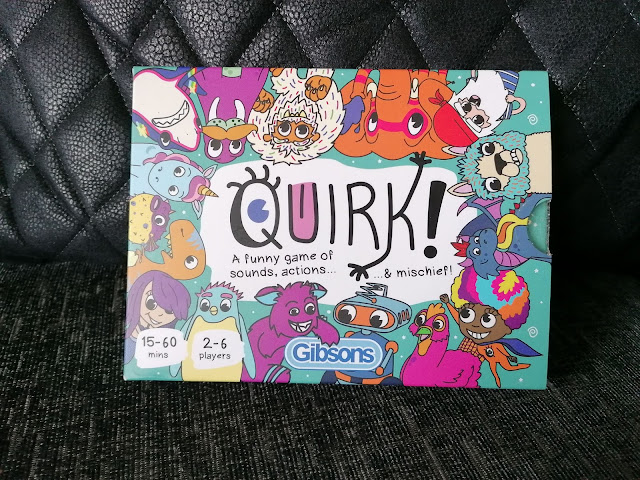 The box for Quirk! is of a compact size, so it is perfect for taking on picnics, days out, travel and holidays, as well as playing in the home. The front of the box is really bright and eye-catching, with numerous different colourful characters featured across the front. The dinosaur and elephant immediately caught my sons attention and he was very keen to find out more about what the game was all about.

My son Riley opened the box and inside we found the following contents:

The character cards come in sets of 3 and when you manage to collect three of the same character, then you have a 'Quirk!'. The aim of the game is to collect the most Quirks, with the person who manages this becoming the winner. 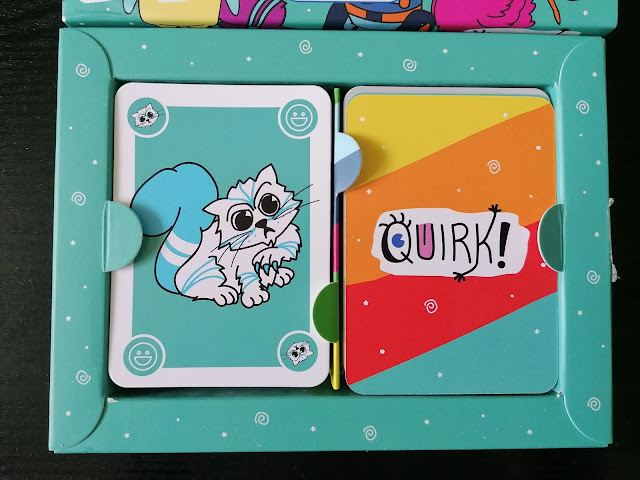 Some of the cards have a grey outline and others have a white outline.  This means that you can swap out Characters sets from the decks to make the game different each time. The characters in the white sets are also easier for younger players to act out, so you can switch between the two sets depending on the age range of the players.  A standard game will have 13 character sets and lasts between 15 and 30 minutes or you can also play with all 78 cards if you want to enjoy a longer game.
To get the game ready, you simply shuffle the Character cards and then hand three out to each player. You then shuffle the remaining cards again, but this time adding the Action cards to the deck. The deck is then placed face down in a location where everyone playing can reach. Each player should have a minimum of three cards in their hand throughout the game and if you drop below three then you must pick up additional cards from the deck. 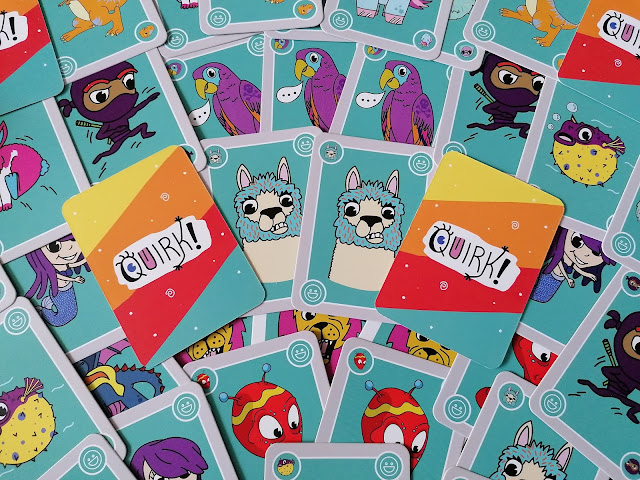 We began our first game as a standard game with 39 green Character cards, 5 red Steal Action cards, 4 blue Stop Action cards, 3 orange Block Action cards and 5 yellow Mischief Action cards. When it is your turn, you need to make the decision as to whether you will try to win a Character card from another player, or whether you will try to steal another players completed Quirk. To try and win a character you will need to select one of your existing characters and then choose another player to try and obtain another of the same kind, however you cannot simply ask for it and this is where the fun begins!
In order to obtain another character you have to act it out with sounds and actions. So if you had a cat character, then you could act like or cat, or perhaps make a meow noise. If the other player then has the card you are looking for, then they must hand them over to you. So if they had 2 cat cards, they would need to give you both, allowing you to complete a Quirk. If they don't have the card you are looking for, then you will need to pick up another from the deck. In the event that the other player misjudges your acting skills and provides you with the wrong card, then you simply have to keep quiet about it and then try again on your next go.
When you complete a Quirk, then you place these face up on the table. However, this doesn't make them safe, as if a player comes across a red Steal card, then they can steal your completed Quirk, that is unless you have an orange Block action card. You can definitely use these cards to your advantage as the game progresses, in particular the blue Stop card, which prevents someone asking you for a particular character. These action cards need to be used wisely, as once they have been used, they need to be placed on the discard pile. 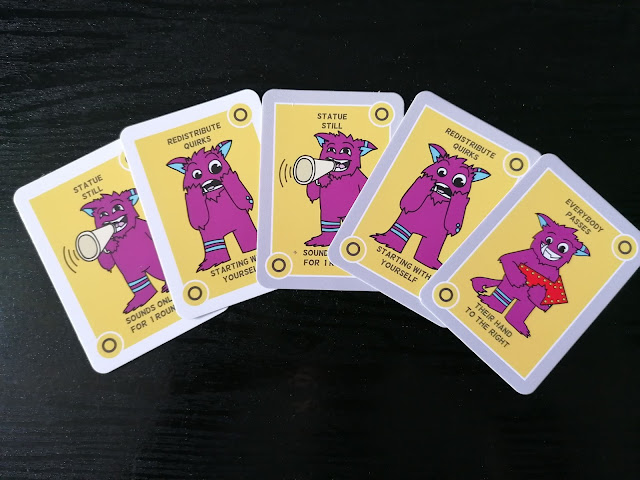 The yellow Mischief cards add further variation to the game and you can choose whether to include these in your deck or not. If someone picks a Mischief card during game play then it has to be placed face up on the table so that all players can see. These cards feature various different mischievous tasks such as everybody having to pick up an extra card, or having to use actions only for one round. This can create a lot of additional fun and drama to the game, especially if you have to redistribute your Quirks. Once all 13 Quirks have been collected then game play ends and the person with the most sets of Quirks is the winner!
Overall we loved this game and had such a laugh throughout play. It was so funny seeing the way that different family members would act out different characters and although a couple of the family were a little shy about doing this to begin with, they quickly became more extravagant and hilarious with their character impressions. It is a very simple game to set up and understand, making it ideal for both the home and trips away. I am sure this will quickly become my childrens game of choice for the foreseeable future and look forward to including this regularly in our future family games nights.
If you would like to find out more about Quirk! or the other products in the Gibsons Games range, then you can visit their website or social media pages on the following channels:
Website: www.gibsonsgames.co.uk
Instagram: @gibsons_games
Twitter: @gibsons_games
Facebook: facebook.com/gibsonsgamesofficial 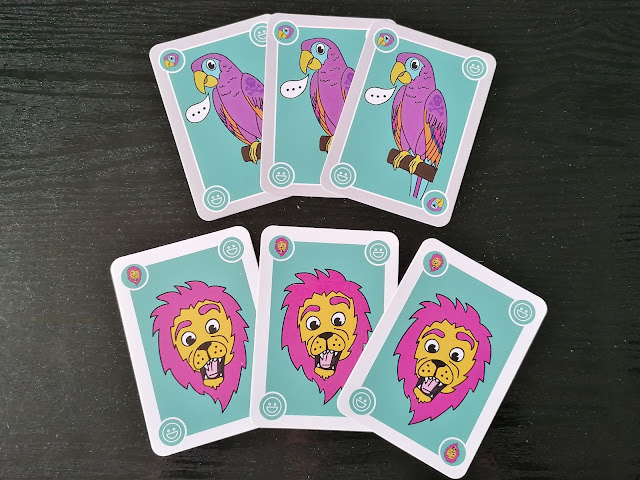 *Disclaimer: We were gifted this game for the purpose of writing an honest review of the product. All thoughts and opinions are my own unless otherwise stated. This post contains an Amazon affiliate link.
Posted by It's A Family Adventure at 15:07