For the past few years, it has become somewhat of a family tradition for us to visit Waterside Arts Centre and enjoy their wonderful Christmas performances. This year has been no exception and last night we attended the press night for the internationally acclaimed Mr Popper's Penguins which will be running at the theatre until the 31st December. My husband and I visited with our six year old son, who is the perfect age to enjoy this magical and heartwarming tale.

Mr Popper's Penguins is a Kenny Wax and TC Beech Production adapted for the stage by Pins and Needles Productions and is based on the much loved childrens book written by Richard and Florence Atwater. It tells the story of painter and decorater Mr Popper, who spends his days dreaming of Antarctic adventures. He is astounded when one day a packing crate arrives on his doorstep - and out of which waddles a penguin...

From the moment the show began, we knew we were in for a treat. The auditorium was filled with excitement as the cast took to the stage and introduced us to Mr and Mrs Popper, who live in the quiet town of Stillwater. When Mr Popper sends a letter to esteemed adventurer Admiral Drake, he receives quite a peculiar response, in the form of a large wooden crate that contains something very special inside. 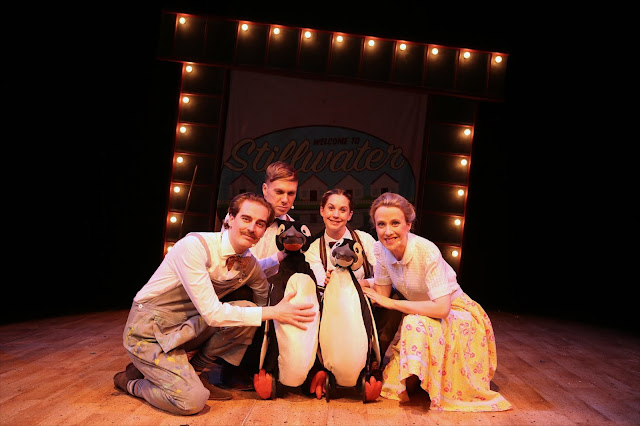 My son was so excited to see the Penguin waddle out of the box and for a moment, you could be forgiven for forgetting that there were even puppeteers in control. Riley's focus became drawn to the astounding Captain Cook as he caused all kinds of mischief and mayhem on the stage and he began to laugh at his antics. The movements were so realistic, but also comical, which when accompanied by the penguin squawks provided a great deal of entertainment.

Before long Captain Cook was joined by another penguin named Greta and the two struck up a loving friendship with plenty of fun and frolics. The introduction of eight penguin babies brought even more humour to the stage and we couldn't help but laugh at all their antics. We also loved the show tunes, which showcased the brilliant performance and vocal skills of the cast.

I will add that my son is very sensitive to sadness, so as well as laughing for the most part, he did also shed a few tears when he thought that Mr Popper would need to say bye to the penguins. Luckily this moment of sorrow was quickly replaced with a smile, when he realised that Mr Popper would in fact be joining them on their return to the South Pole. This led to a beautiful boat scene, which was fantastic to view. 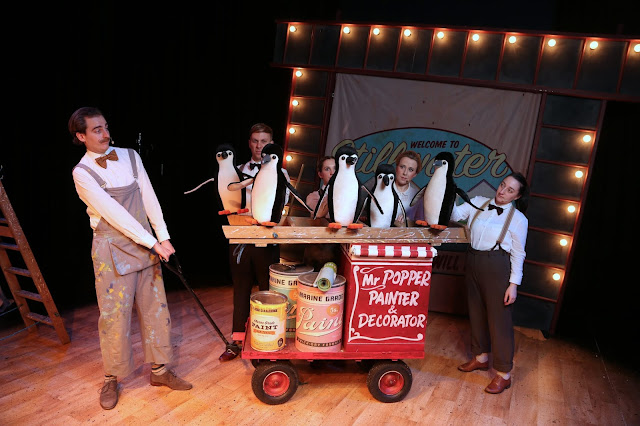 Overall, we absolutely loved this production and it touched every emotion possible during the sixty minute performance. Whilst the show is recommended for children aged 3 to 11, I found that I enjoyed it just as much as my son and feel that this heartwarming story is sure to delight audiences of all ages. The musical numbers were entertaining and were well suited to the thirties era in which the story is set. This action-packed children's musical had us captivated from start to finish and I would absolutely recommend this show to others, for a magical festive treat.

*Disclaimer - We were invited to the press night for the purpose of writing an honest review of the production. Opinions are my own unless otherwise stated.
Posted by It's A Family Adventure at 19:14