Horrible Histories Live on Stage - The Terrible Tudors at Storyhouse, Chester - A Review

My two eldest children are now both in high school, where they have quickly found that subjects are far more focused than they were in primary. They find History absolutely fascinating, but with so much to remember it can be hard to retain some of the factual information at times, especially when delivered in a traditional classroom setting. One thing that has always helped them in relation to their History topics, is the Horrible Histories series of books, which deliver history in not just an educational way, but also in a manner that is fun and enjoyable too. We were therefore delighted to attend Storyhouse in Chester last night to see Horrible Histories Live on Stage - The Terrible Tudors!

There was grisly gags and bloodthirsty battles galore, throughout this action packed show that was cleverly delivered by a talented trio of actors from the Birmingham Stage Company. There was never a dull moment as we were taken on a journey through the Terrible Tudor times and learnt about the murderous monarchs, manky medicines and perilous punishments that were typical of this historical era. 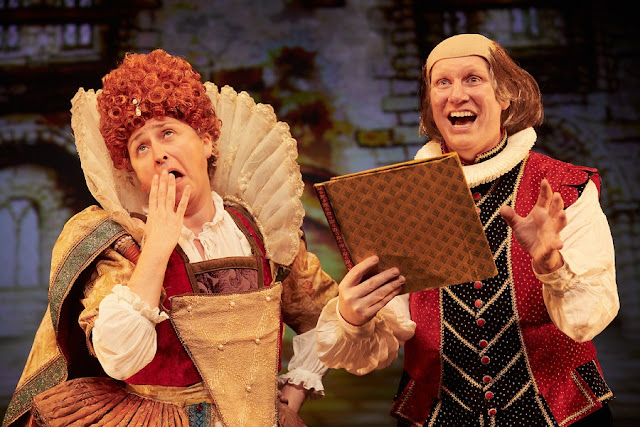 The show began with Richard III and a brief comical portrayal of the Battle of Bosworth, where we were then introduced to Henry VII also known as Henry Tudor. As the show progressed we learnt more about his successors and of course the fiercesome Henry VIII and his six wives. My children particularly enjoyed this part of the show, especially the very easy song which had all of the audience singing along and joining in with some simple choreographed moves.

We were initially surprised at the minimal use of props, as I had envisaged there being quite an elaborate stage setting due to the stories that would be told. However, this quite simplistic appearance actually worked fantastically well and ensured that the focus was on the actors and the exciting way that they were delivering the show. This compacted telling of British history was extremely enjoyable and we remained fascinated through the show, right up until the demise of Queen Elizabeth I.

In between learning about the Tudor monarchs and their families, we were also provided with some very disgusting facts about how life would have been. My son chuckled at the idea of Edward VI's whipping boy, whilst my daughter and I laughed through the comical rendition of Greensleeves.

The crime and punishment scene left us all shocked at just how horrific the sentences were, whilst the manky medicines left us equally disgusted at their choice of treatments and potions. We were amazed from start to finish and remained engaged and excited as our historical knowledge increased by the minute.

A particular highlight for us all though, was the Elizabeth I and Will.I.Am Shakespeare scene which made us want to get on stage and dance along with them. It was fantastic and certainly very memorable. We also enjoyed the added novelty of Bogglevision 3D effects during the second act, which provided yet another exciting element to the show.

Overall we had a wonderful time at Horrible Histories Live on Stage - The Terrible Tudors and we were very impressed by the cast and their performances throughout the show. It was educational, entertaining and most of all fun, with plenty of audience participation too. Packed full of facts, jokes and a colourful script, we all came away from the show having learnt something new, as well as a song that will be stuck in our head for weeks to come!

Horrible Histories Live on Stage is currently performing BOTH the Terrible Tudors and the Awful Egyptians at Storyhouse this week at varying times, so make sure you don't miss out and check out the listing details below for the remaining dates.

Tickets can be booked online at www.storyhouse.com, or by calling 01244 409113. Alternatively you can visit the Ticket Kiosks at Storyhouse, Hunter Street, Chester, CH1 2AR.

*Disclaimer - We were provided with press tickets for the purpose of reviewing the show. All opinions are my own unless stated otherwise.
Posted by It's A Family Adventure at 19:02