Making Slime with The Hangrees - A Review

Well there is no denying that my boys absolutely love slime, whether it be making their own, playing with ready made tubs or spilling it all over my carpet, it is certainly a favourite in our home. Therefore when they were offered the chance to review one of the coolest new slime making toys on the market, they quite literally jumped at the chance to have some fun with The Hangrees!

The Hangrees are a new range of outrageous slime collectables, that come in a selection of parody figures such as Harry Plopper, Chew-kaka and Fartnite. They look hilarious and instantly appealed to my boys, but would they be as good as they looked?

We received a large box through the post which was packed full of goodies including three new Hangrees and a selection of food items in parody packaging. The contents of the box had the boys in giggles almost instantly as they pulled out a large tube of Poo-ringles and a pack of Diaritos. I must admit that my inner child also found these quite hilarious. We also received a packet of Reek's, a Booger King bag, a whoopee cushion, a Farnite Hangree, a Chew-kaka Hangree and a Five Nights of Farts Hangree. 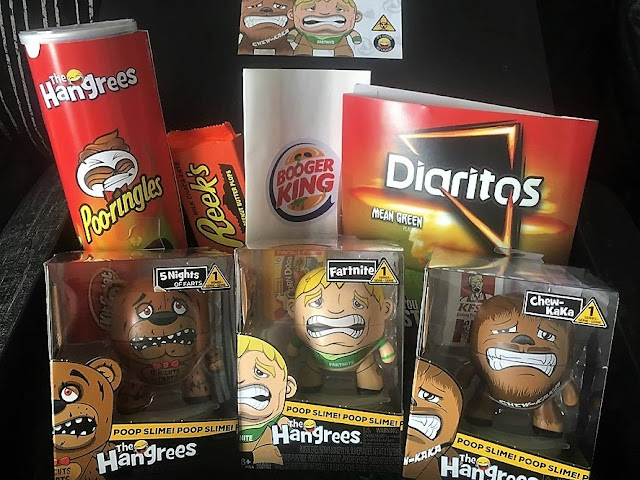 They both selected the Fartnite one to try first, so we carefully opened the packaging and laid the contents out on the table. From previous slime making experience I know that this can get quite messy, so I ensured that we placed a towel across the table before we got creative. This proved to be a wise choice as there were a couple of spillages along the way.

Inside the box we found the following contents:

I had a brief read through the instruction steps and was pleased to see that it sounded it extremely simple, so we began to create our Hangrees Fartnite slime. 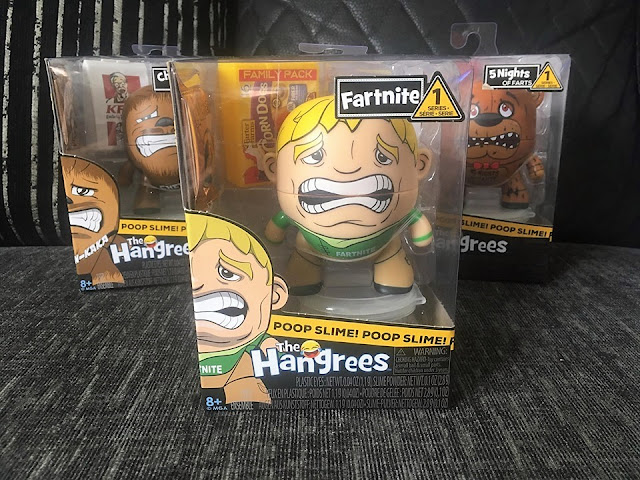 Firstly we opened the texture packet and the powder and emptied these into our Farter Farms Uni Corn Dogs container. Ben then went to fill up the toilet tub with water which needs to come up to the fill line. Whilst he did this, I held the container tightly shut and shook it well to mix the texture mixture and powder together. 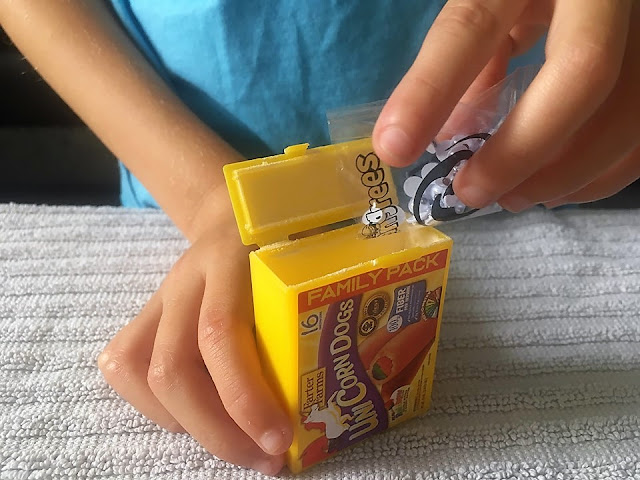 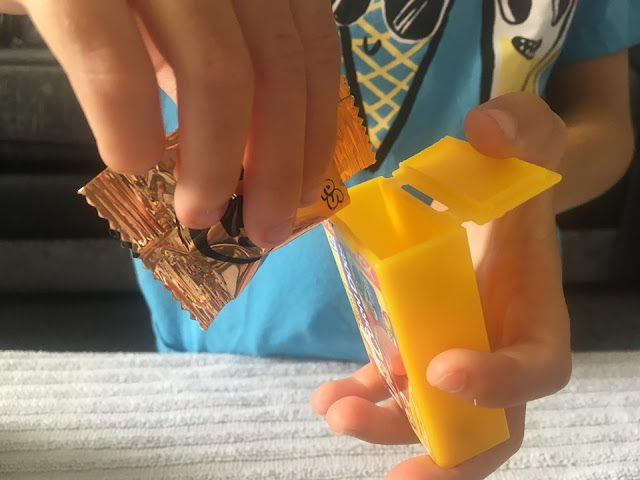 We stood our Fartnite character on a flat surface, raised his head and tongue and then emptied the water from the toilet into his body. You need to ensure that the character is in the standing position, otherwise if his right leg is raised then the water will come out of the hole at the bottom.

Once we had poured the water in, then the fun part began of adding the powdery mix and creating the slime. We carefully poured the powder into the character body, before then closing the head and shaking well for just over a minute. You could reopen the head at this point to check on the mixture, but we had followed the instructions well, so we were confident that we had done everything correctly and therefore simply continued with the slime-making steps. 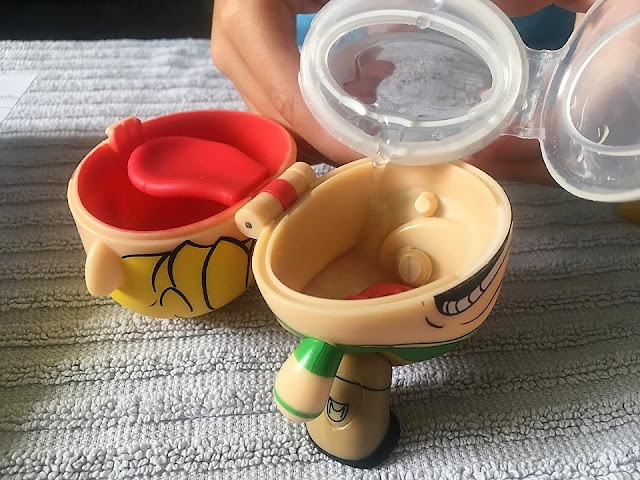 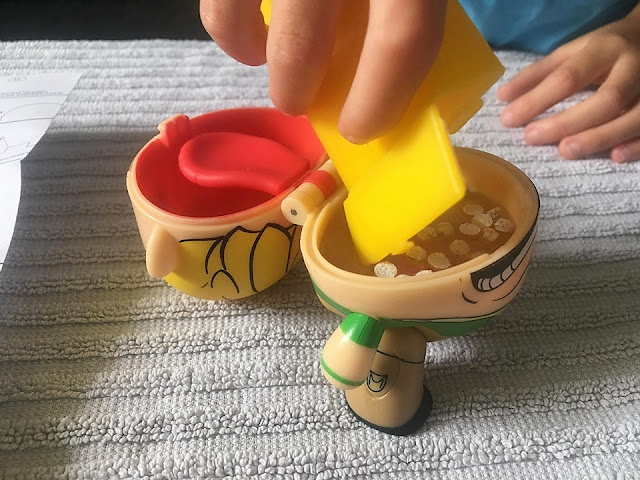 We then sat our character above the toilet and raised his left leg to help position him on the loo. Once I was confident that his bum was safely over the toilet bowl, we then raised his other leg to put him into the sitting position that would allow him to enjoy a slime poo!

On first glance it did look quite runny, but the instructions said to leave it to set before playing, so we did exactly that and returned to our Fartnite Hangree 15-20 minutes later. At this point we did indeed have the perfect slime which was gooey, sticky and very stretchy. The toilet does have a lid, so this can also be used as a great storage tub for the slime. 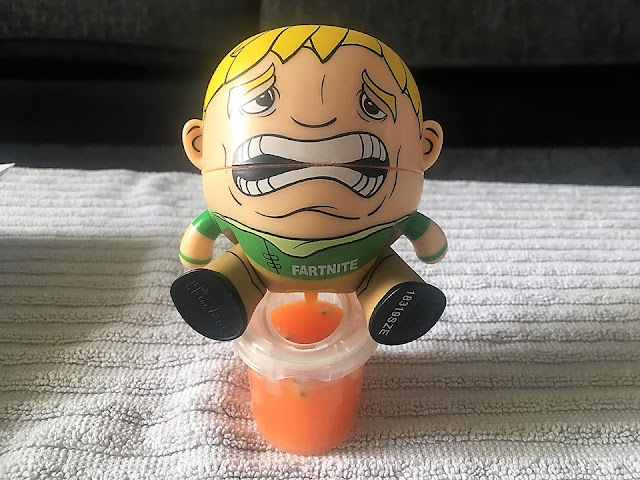 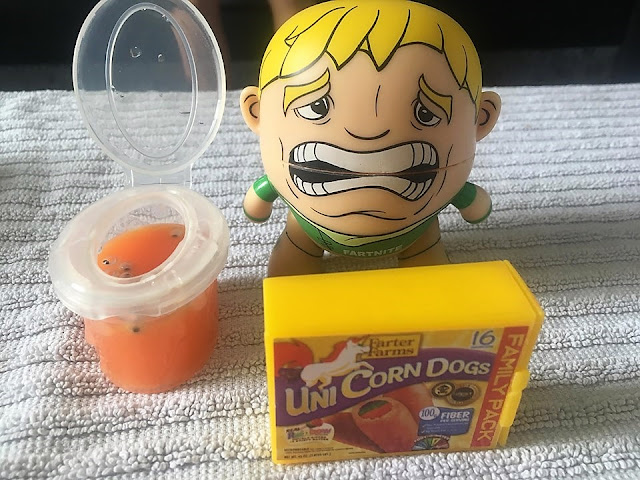 Both of my boys were very impressed and the products also provided us with plenty of laughs. Our towel did experience a couple of spillages from the powder, water and slime, but we had expected this and to be honest my boys find making a mess all part of the fun. 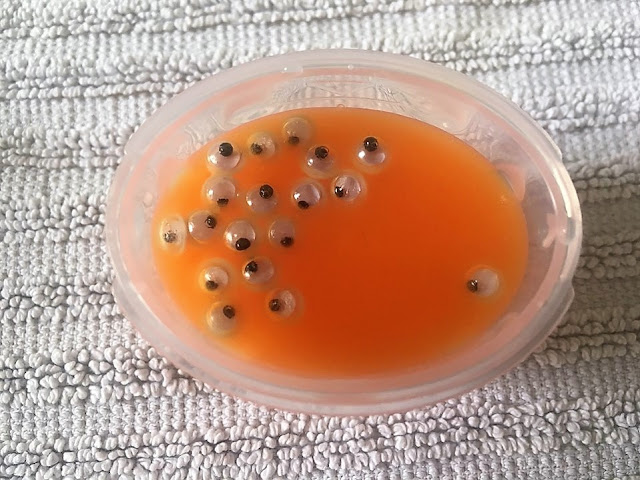 There are currently 20 Hangrees to collect in Series One and they are recommended as being suitable for children aged 8+. They currently retail at £9.99 each which I think is actually great value for money, compared to other collectables on the market. The fact that the characters can also be easily cleaned and kept on display once you have made the slime is another great plus point. They come in a great range of popular characters and both Riley and Ben have already picked out which ones they will be looking for next. Overall we thought that The Hangrees were great and cannot wait to build on our collection.

The Hangrees are currently available for purchase in most major toy retailers including Smyths Toys, The Entertainer and Amazon.

For further information you can visit The Hangrees website or their social media pages on the following channels: 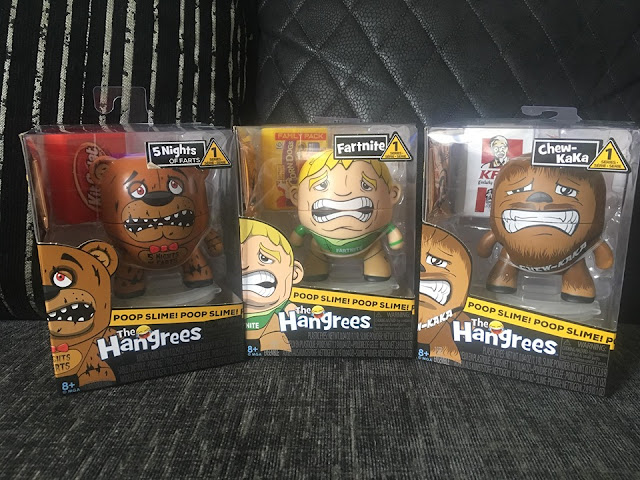 *Disclaimer - We were gifted the above products for the purpose of writing an honest review of the toys. All opinions and photographs are my own unless otherwise stated. This post contains an Amazon affiliate link.