Last week we were sent an Engineering Makerspace Alien Robots Science Experiment Kit from the Thames and Kosmos range for the purpose of writing an honest review of the product. The brand was not one that I was actually familiar with prior to writing this review, but I have since discovered that they are very highly regarded in the toy and educational market, with an extensive range of more than 80 science kits on sale.

The Engineering Makerspace range explores the physics of force, motion, energy, levers and more, which means that children can build and learn for fun, as they play. The range includes Kinetic Machines, Geared Up Gadgets, Alien Robots and Off Road Rovers.

My eldest son absolutely loves anything involving science and technology. He has been involved with some great scientific experiments whilst in primary school, but cannot wait to improve his science and maths knowledge when he moves on to high school next year. This was therefore the perfect product for him to try out and really got his brain thinking as being powered by STEM it focused on Science, Technology, Engineering and Math. 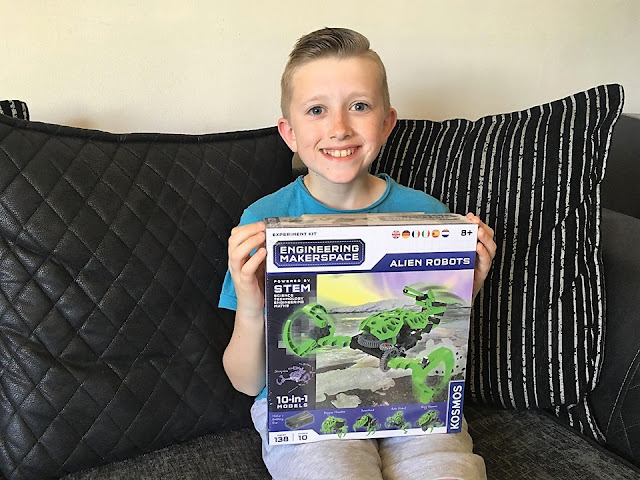 The Thames and Kosmos Engineering Makerspace Alien Robots Science Experiment Kit allows you to build 10 fun motorized models including a Walking Robot, a Flapping Bird and many more. It also features a battery-powered motor box which helps to bring the models to life.

The front of the box is really eyecatching with a large image of the Scorpion model on the front. There are also several further small images underneath this which show the motor and battery box, the Dragon Monster, Insectoid, Auto Robot and Frog Runner. This is great as it gives clear examples of some of the models that can be achieved. The top right hand corner clearly shows the age recommendation of 8+ which helps to clearly identify the suitable age range for the product.

The rear of the box features six further model images along with a picture of all the contents. I always like it when products do this, as it sets a clear expectation as to exactly what you will be receiving inside the box and doesn't leave it open to interpretation. 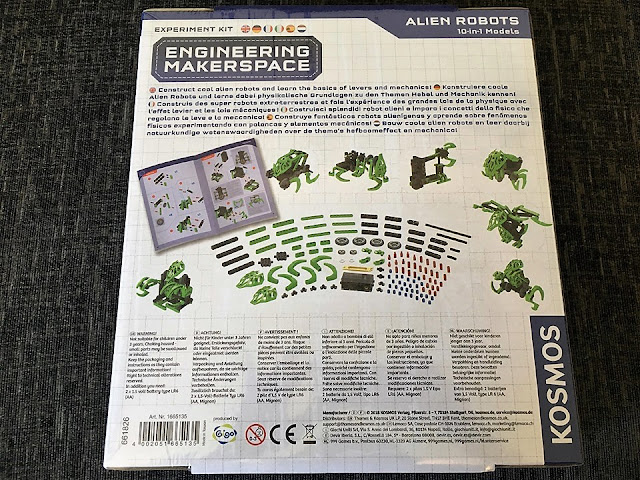 Ben couldn't wait to get started so he began to open the box and take out all of the contents, which he then laid on the table before he began. Initially he immediately thought that there were so many pieces that he wouldn't be able to do it, but when he started to look through the instruction booklet and saw how clear the instructions were, he was confident enough to give it a go.

Inside the box there were 30 different parts in varying quantities. This provided a total of 138 pieces along with the instruction booklet. This booklet provides not only the individual model guides, but also gives plenty of safety information, so it is important to read through this before beginning to build.

Ben decided to tackle the Scorpion first, which had really stood out to him on the front of the box. The guide images for the build are really clear and were much easier for Ben to follow than written words. He made one mistake when he got to part fifteen, but he soon realised his error and was able to figure this out and correct it with ease. This meant that he was also able to use his problem solving skills to find out where he had gone wrong.

Once he had put this right, he only had a few more steps until the model was completed. His elder sister had also become interested by this point, so she also helped him out with the final steps and it was great to see them working together so well.

It was then the moment to switch the Scorpion on which was loads of fun and it made us all jump as it began scurrying across the floor. We had expected it to be really slow, but it actually moved quite quickly and was quite loud too as the motor began to work. All my children then spent some time playing around with this and making it walk in different directions all over the kitchen floor. 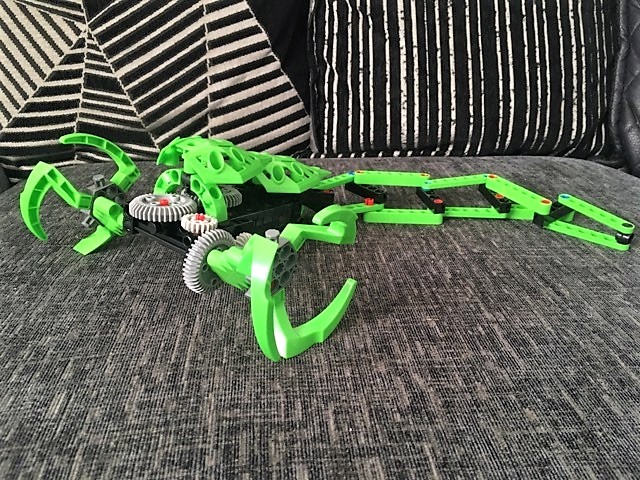 Since then, Ben has gone on to build the Insectoid, Dragon Monster and Grabber Claw as he is working through the instruction booklet in order. He is now aiming to complete a new model every few days, which has made him feel like he has been given a new toy each week, even though they are all from exactly the same kit. You do of course need to dismantle the model to complete a new one, but this is also a fun process and Ben has enjoyed both elements of this.

Overall we all thought that this was an absolutely brilliant kit, that really encouraged my sons thought processes as well as giving him a great educational experience. He loved building the Scorpion and had a great sense of achievement once it had been completed and was so proud of the end result. He overcome some challenges in the build and was able to find out where he had gone wrong and rectify it, which helped him reach completion and also made the further builds easier as he learnt from his first mistake.

It quite literally kept him quiet for hours and he has since completed 4 of the models out of the 10. Therefore in terms of value for money (RRP £24.50) it is absolutely superb, as it is a product that can be varied and used over and over again. We have all been extremely impressed with this Thames and Kosmos kit and whilst I may not have known about them previously, they will definitely be my go-to brand going forwards when purchasing educational toys. In a word - FANTASTIC!

To find out more about the Thames and Kosmos range, then you can visit their website or social media pages on the following channels: 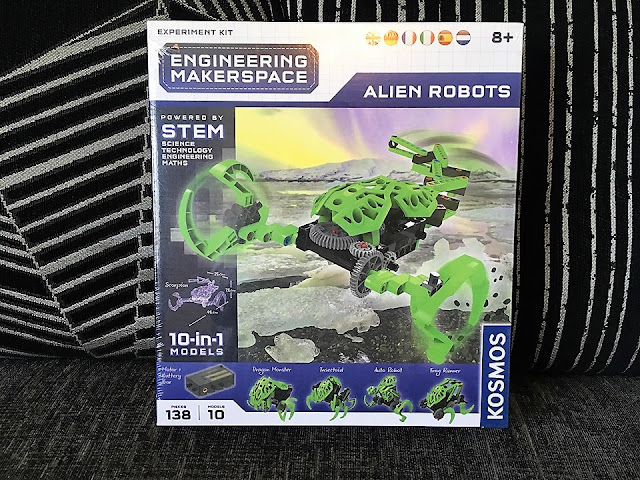 *Disclaimer - We were sent this product on a complimentary basis for the purpose of writing an honest review of the product. All opinions are my own unless otherwise stated.