Our Review of the Treetop Nets in Windermere, Lake District

As a family we are always on the look out for fun new activities to try, especially ones that we can all enjoy together. We enjoy adventure and being outdoors, so when we heard about the Treetop Nets in the Lake District, this sounded like the perfect activity for us to experience. We therefore decided to head up north during the bank holiday weekend to spend the day in Cumbria and see what kind of family fun there was to enjoy.

The Treetop Nets at the Brockhole Visitor Centre in Windermere, are suspended nets located high up in the trees and feature giant trampolines, tunnels and slides. Due to the fact that you are enclosed with nets around the side, it also means that there is no need to wear a harness and you can simply jump, run and explore your way through the treetops. We were all really excited to try this out and my children were particular keen to test out the slides, which were described as being super fast! 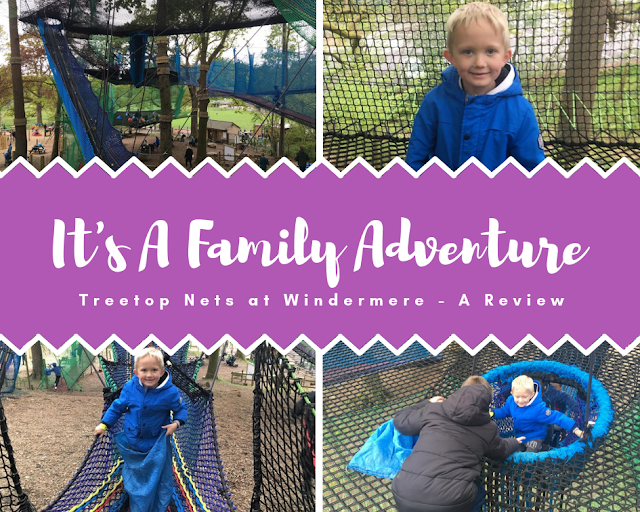 The journey from our home in North Wales to Windermere takes approximately one hour and forty minutes, so we decided to set off early at 7:30am so that we could stop for breakfast somewhere along the way. We had booked our session on the Treetop Nets for 10am, so this gave us just enough time to enjoy a bite to eat and have a pleasant drive.

Our booking confirmation provided plenty of important information, so I had made sure that we had all read through this the day before. There are plenty of health and safety rules which are for the customers own benefit, so it is important to be aware of these and adhere to them both prior and during participation.

It is really important to wear appropriate clothing for the outdoors and for walking and bouncing on the nets, so flip flops and sandals are an absolute no! My children all opted for joggers or leggings with trainers so that they could move about easily, whilst I opted for jeans and pumps. Long hair needs to be tied back so I made sure that Emma's was in a high ponytail before we arrived and I took a hair bobble along with me so that I could tie my own hair back whilst there. You are also not permitted to wear jewellery of any kind, this is because they can be easily caught in the netting which could cause you an injury, so it is best to make sure everything is left safely at home as there are no secure lockers on site.

You are advised to arrive 15 minutes early to allow time to park, pay for your parking ticket, make your way to the Treetop Nets and sign in with reception. I would definitely recommend arriving a bit earlier if you can as we arrived 15 minutes early, but had issues with the parking ticket machine (as did the lady in front of us), so by the time we had resolved this and walked to the reception area, we only just made our 10am slot. It is better to be early and play on the neighbouring park whilst you wait, than to be late and risk missing your session. 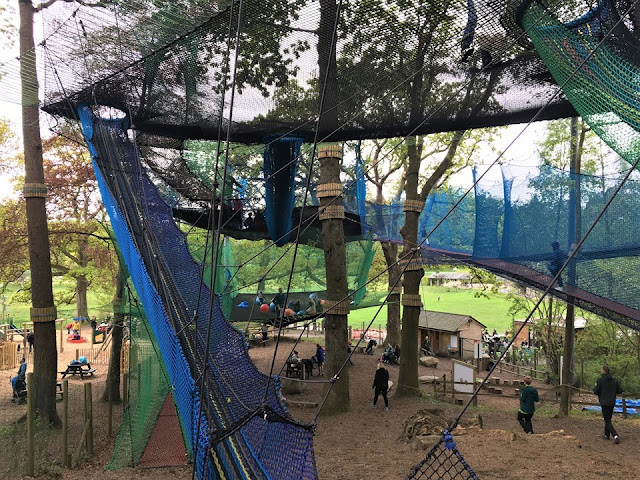 Once we had reached reception, we were greeted by a lovely member of staff who asked us to fill in some consent forms. I had to sign to confirm that we accepted the risks of taking part and then I also had to sign on behalf of the children. Another member of staff then took us to an outdoor briefing where we were told the do's and don'ts and given advice on how to use the slides. She also carried out a check to make sure that none of us were wearing any jewellery and provided us with some bags that we could use to go down the slides. These are essential for using on the slides if you want to avoid any risk of injury or rope burns. We were then free to explore!

Each session lasts two hours and on first glance I wasn't convinced that it would keep us entertained for that length of time. I predicted that we would all be done after an hour, but I will happily admit that I was wrong and in fact the full two hour session flew by. Initially Emma and Ben ran off in different directions, whilst I stayed with our youngest son Riley. He was very nervous and apprehensive to begin with and would get scared if he looked down. We began by walking gently and holding onto the sides, so that he could get use to how it felt walking on the nets. This gradually helped to build his confidence and he began to move more into the middle, but he was adamant that he would not be going down any slides. After about twenty minutes he gained the confidence to start bouncing and really began to enjoy himself. Before long there was no stopping him as he ran and bounced his way through the nets.

At this point he was still unsure about the slides, but said that he would think about it and he watched on as his brother and sister went down them. His elder brother then managed to convince him to try one of the tunnels and he spent ten minutes just going back and forth through it. He absolutely loved it and found it quite a challenge to get out at the other end, which he thought was hilarious as his brother had to keep helping him out. 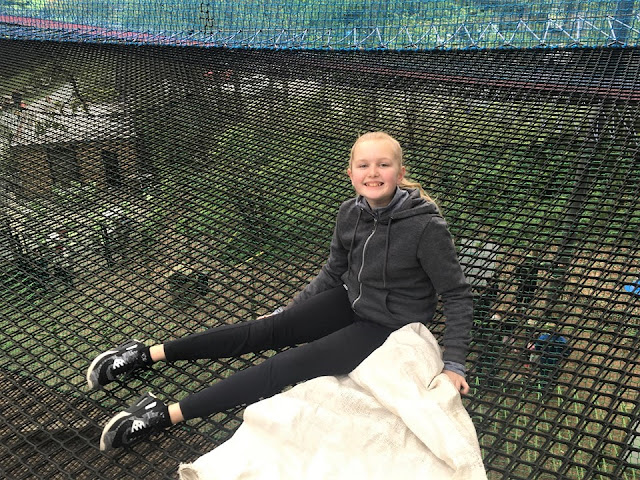 Emma and Ben then decided to spend sometime in the Ball Zone which is a huge netted area that contains large rubber balls (about birthing/gym ball size). Personally I found this area to be a little too busy for Riley who is 6 and it seemed more suitable for the older children and adults who were playing Dodgeball with the balls. I did notice that in the second hour of our session there was a member of staff supervising this area which was reassuring and play did seem much calmer during this time. Both Emma and Ben did enjoy it there though and were of a similar age to the others playing, so they just avoided any balls that were thrown or simply laughed it off if they did get caught by one. They stayed in this area for a good half an hour, so whilst it wasn't ideal for Riley, it was very enjoyable for them.

There was however, plenty of other areas for Riley to play so my husband and I set about trying to encourage him to go down the slides. Riley soon agreed that if I went down the slides first then he would have a go too. It sounded like the perfect deal to me, so I shuffled into my bag and set off down to the bottom of the slide. After a few minutes of doubt, Riley finally agreed and once he had gone down the slide once, there was absolutely no stopping him as he then went on the slides over and over again. 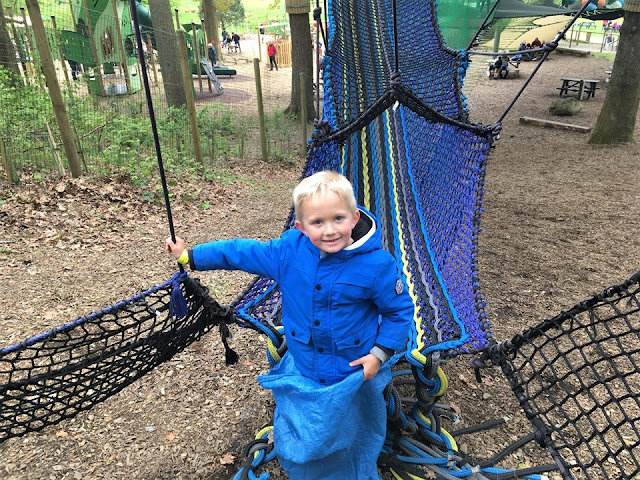 One thing that I particularly liked about the Treetop Nets was the Under 7's Chill Out Zone, so if it did ever seem too busy, or if your little one simply needs a break, then you can head there for some quieter time and play. There was plenty of space and it also had its own slide, so we did utilise this area on a couple of occasions especially at the beginning of our session when Riley was still building his confidence.

My only disappointment with the whole attraction, was how quick the two hour session seemed to pass! None of my children wanted to leave and before we had even walked out of the Treetop Net area, they were already asking when we could do it again. I enjoyed it just as much as the kids and it was nice to be able to take part in the activity with them, as opposed to just supervising.

Overall we had an absolutely fantastic time at the Treetop Nets and it is somewhere that we will definitely be visiting again. I thought the layout was great and I also liked the fact that there were picnic benches underneath the nets, so you could take a break when you needed to, or enjoy a snack and a drink. It didn't feel crowded at all at any point and because the ball zone seemed to be the most popular area, there were times where it felt like we had the remainder of the nets to ourselves which was great. The slides were really fun and fast and most importantly everything felt really safe. At no point did I feel worried or nervous about the nets being suspended in the air and seeing numerous staff members walking around and supervising was also very reassuring. Ultimately we had a brilliant time and my children have already requested a return visit in the summer holidays, which I have happily agreed to. The Treetop Nets are a fun experience for the whole family and we cannot wait to go back!

To find out more about Treetop Nets or to book tickets, then you can visit their website or social media pages on the following channels: 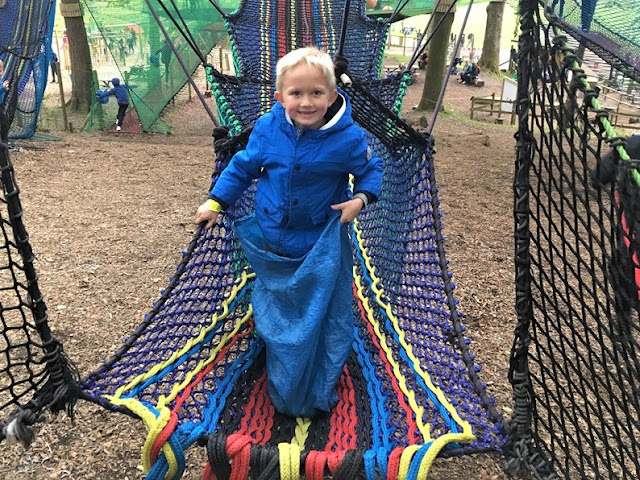 *Disclaimer - We were provided with a complimentary 2 hour session for the purpose of writing an honest review of the attraction and our experience. Opinions are my own unless otherwise stated.
Posted by It's A Family Adventure at 14:39