The Indoor Funfair at Liverpool Exhibition Centre - A Review

With the ever changing weather at the moment, it is great to have the option of some indoor attractions. We were therefore really excited to learn that the Indoor Funfair was heading to Liverpool, which was perfectly timed with my children's school holidays. On Tuesday morning we caught the train into the city, to visit this brand new event and find out what was on offer for some family fun.

We travelled on the train from our home town via Chester and onwards to James Street station in Liverpool. I used our family and friends railcard (which has already more than paid for itself) and managed to get a return ticket for one adult and three children for only £9.40. Once we arrived at James Street we had an enjoyable walk along the waterfront towards the Indoor Funfair and it took approximately ten minutes at a steady pace. 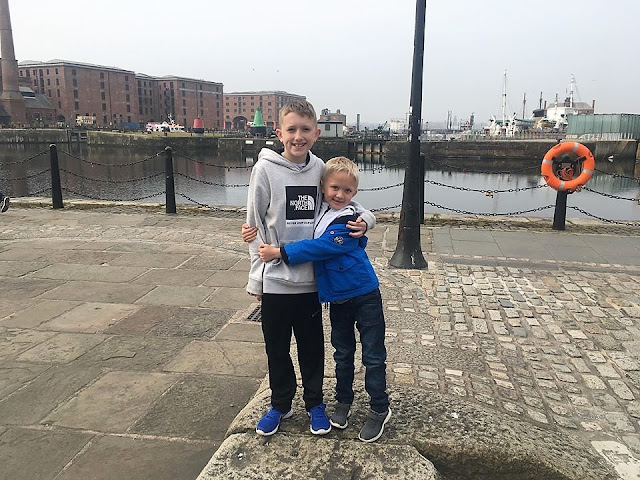 We were booked in as guests for the 10am til 1pm slot and we arrived shortly after the start time at approximately 10:10am. Due to our slightly late arrival, there were absolutely no queues outside and we walked straight into the building. The first thing that I noticed were that there were good security measures in place and several security staff were on the door conducting bag checks. We also saw another patrolling the corridors to the attraction entrance and several more in the main hall, which I found to be very reassuring at a family event.

We collected our wristbands and made our way into the Indoor Funfair and my children were excited to see what rides were available. I saw that the cost for guests was only £10 per person, or £2 if just spectating, which for unlimited rides for three hours sounded great value for money. Under 3's are also able to visit free of charge, but understandably their are quite limited rides available for that age group.

Directly opposite the entrance were a selection of 2p machines which my children love, so before we even had the chance to walk around, my son had already put a pound in the change machine to try his luck at winning some sweets and chocolate that he had spotted on the edge. Once they had each played on here for a short while, we started to take a good look around the hall and had a walk around before choosing where to start. 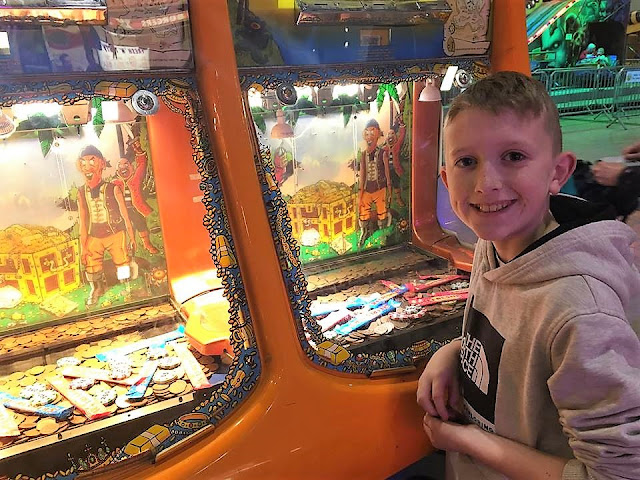 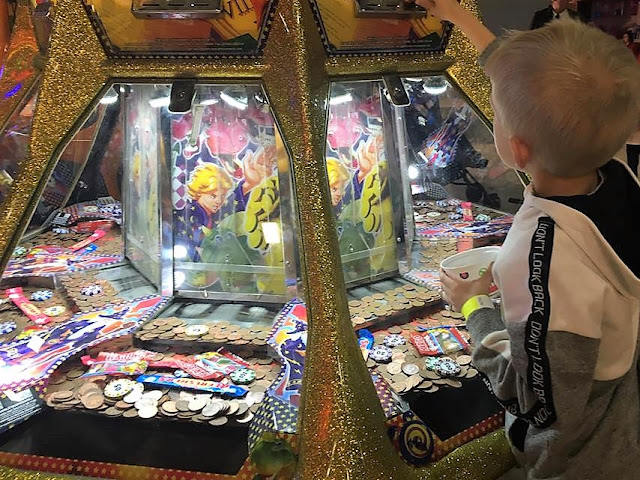 It was slightly smaller than I expected and initially I was unsure if there would be enough to keep all of us entertained for three hours. However I needn't have been concerned, as it actually turned out to be the perfect length of time to enjoy everything a couple of times and my children had a great choice of rides to go on. Our only slight disappointment was that there were no dodgems, which is my eldest sons favourite, but he soon got over this after finding plenty of other fun things to do.

We started with the mini Dragon Coaster which was my youngest sons choice. This is basically a mini rollercoaster that travels at slow speed, making it ideal for little ones. Fortunately my older two children enjoy spending time with their little brother, so they were also happy to go on the smaller rides with him to keep him company.

We then moved on to the large inflatable slide which is recommended as being suitable for ages 5+. The member of staff running this controlled the queue well and would only allow one person up the slide at a time to ensure safety. My daughter also tried to go on this, but was slightly taller than the height limit so was turned away and although she was slightly disappointed, I was happy to see that safety rules were being followed and enforced. My two boys loved this slide however and travelled down really fast numerous times.

As Emma had been unable to go on the slide, I told her to choose where she would like to go next, so she picked the large swing chair ride and enjoyed a couple of goes on that whilst her brothers went on the mini train ride next to it. She then moved on to something a little more fast paced and hopped on to the waltzers, whilst her brothers had a second turn on the train. Before we knew it the first hour had passed so we decided to grab a seat and have a drink. 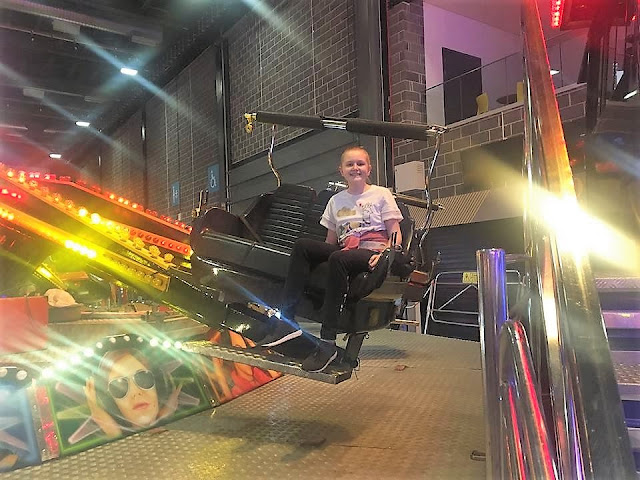 The food and drink costs would be my only complaint about the event as they were expensive. Obviously you dont HAVE to purchase anything and this is optional, but in three hours most people are likely to need a drink and I was a little annoyed at having to pay £2.50 each for a can. The food was also overpriced, but luckily my children have a good sense of value and refused to let me buy anything hot, instead suggesting that we went to a bakery on the way home to get some sausage rolls and cakes. I did however buy two bags of candyfloss for them to pick at throughout the morning which cost £2 per bag.

Once we had finished our drinks we continued around the funfair and Riley went on the Mini Miami which he absolutely loved. It would have been nice to have also had a full size version of this, as it is always a popular ride, but Riley absolutely loved the mini version and was even brave enough to put his arms in the air (well for a millisecond anyway)!

Other favourites included The Frogs, The Helter Skelter and The Funhouse, which my children went on numerous times. Again time had passed quickly and we soon realised that there was only half an hour left, so we made our way over to the Energiser Assault Course. This is an absolutely huge inflatable which took up an entire wall of the exhibition hall and is packed full of obstacles and slides. My children thought this was fantastic and spent the entire remainder of our time at the attraction on this inflatable, taking it in turns to race one another. 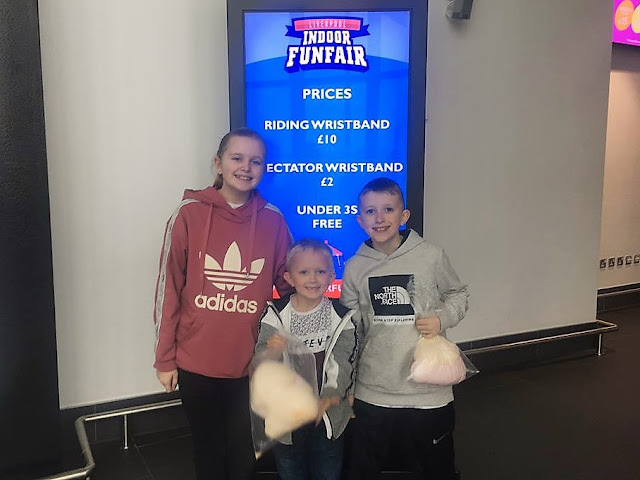 Overall we had a great time and felt that the £10 entry fee being charged was very reasonable for what was on offer. We have been to travelling funfairs before that tend to charge around £2.50 per ride, so considering that you can go on the Indoor Funfair rides an unlimited amount of times in three hours, it really is great value for money. I felt that the event was well organised, secure and safe which are all essential elements when organising a family event and all of the staff that we interacted with were friendly and helpful. My only criticism would be the costs of the food and the games because whilst these are optional expenses, it is highly likely that children are going to want to try them at some point during the visit.

The Indoor Funfair will be at the Exhibition Centre in Liverpool until Monday 22nd April. There are three times slots available each day which are 10am til 1pm, 2pm til 5pm or 6pm til 9pm. Entry costs £10 per person for unlimited rides, £2 for a spectator and Under 3's go free. Height and age restrictions apply to some rides and there are also additional charges for the games and food stalls.

For full information on this event or to book tickets, you can visit the Indoor Funfair website or their social media pages on the following channels: 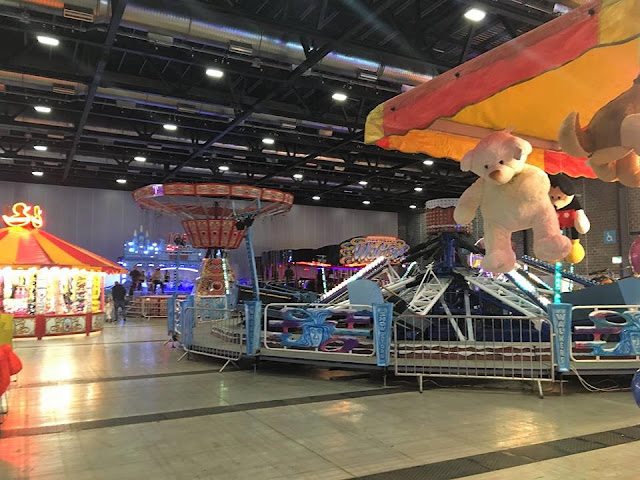 *Disclaimer - We were invited to this event and provided with complimentary wristbands for the purpose of writing an honest review of our experience.