My son has collected Match Attax for several years now, accumulating quite an extensive collection of all his favourite football players. Like most children he loves to collect things, so with Match Attax currently being available at 'pocket money prices' he has been able to purchase packs regularly to help complete his teams. He also enjoys swapping his doubles with friends and it has been great to see him and his class mates help one another with their searches for some of the most wanted cards. At Christmas we also purchased the Match Attax advent calendar for him, which we found to be great value for money as there was a pack of cards behind every single door, which was a fabulous alternative to daily chocolate.

Ben was therefore delighted when we were recently sent a huge bundle of the recently released UEFA Champions League Match Attax. This not only scored me some mega brownie points, but also kept him quiet long enough for me to enjoy a cup of coffee, whilst he opened all of the packets. Definitely a win win situation for me! 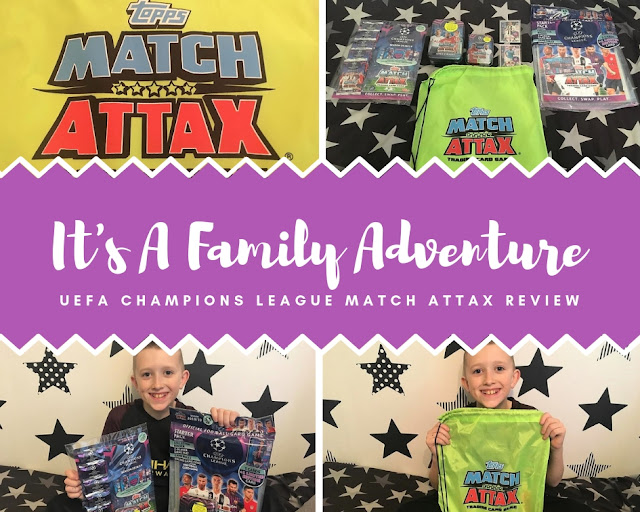 The first item Ben opened was his Starter Pack, which with an RRP of only £5 seemed to offer great value for money. Inside there was a collection binder, the 2 player game mat, game rules, an online game code, 5 cards plus 1 limited edition card.

The binder is a great storage solution to ensure that all your cards are kept in the best condition and it is really easy to arrange the cards and place them inside. Ben decide to sort all his cards into teams first knowing that he quite a lot to open, before placing them in the binder afterwards. There are over 450 cards to collect, swap and play with, so he was also trying to keep count of how many he had, as well as placing any doubles to one side ready to trade. 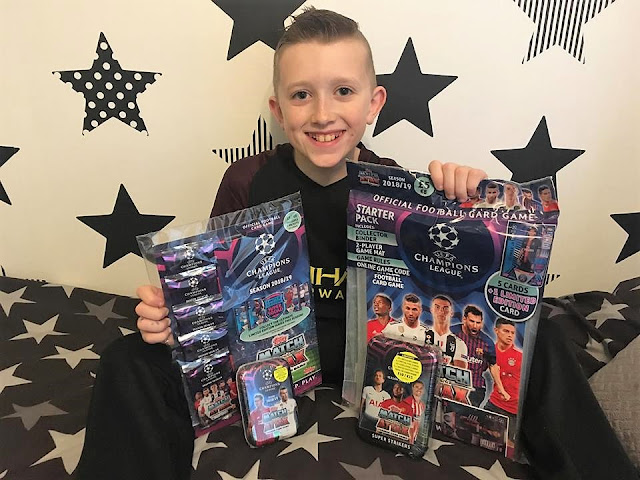 He then began to open his Super Strikers Mega Tin which contained a fantastic 50 cards which consisted of:
Some of his all time favourite players were in this pack and he continued sorting his cards into the corresponding teams. The Mega Tins have an RRP of £10 and are available in 4 different varieties which are Rising Stars, Title Winners, Super Strikers and Superstars and the tin also acts as great storage for keeping your cards safe. Ben uses the tins to keep his swaps in, so that he can carry them around easily when trading with friends. 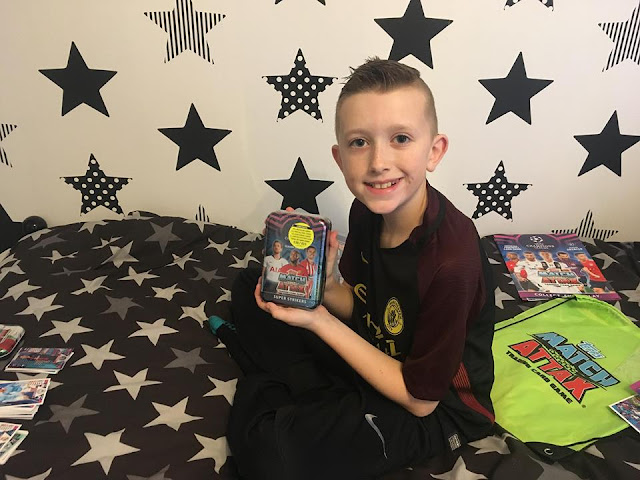 Next he opened a Match Attax Mini Tin which has an RRP of £7. Ben really liked the mini tin as it is small enough to fit in his pocket, so he can keep his cards to hand whether for swapping or playing. It also helped that two of his favourite players were featured on the front of this tin, so it'll most likely become the tin that he uses the most. The mini tin contained a total of 42 cards which consisted of:
Lastly he opened a multi pack which contained 5 packets of cards. His sister had also become interested by this point, so they both sat on his bed whilst opening the remaining packets. It was lovely watching them chat together as she asked Ben about who the players were and what he thought of them. She then asked him to explain the game to her and this ended up in them playing nicely together for well over an hour. He also shared some of his doubles with her and his younger brother Riley so that they could both start their own collection too, which I thought was a lovely gesture. 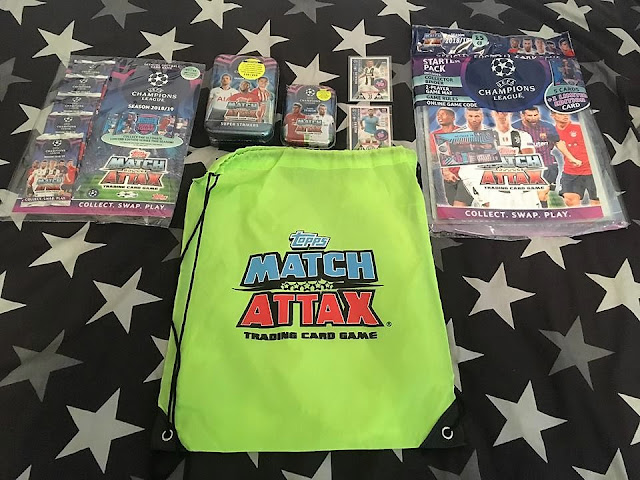 Once they had finished playing, I took a closer look at some of the cards, to see what kind of information each one provided. The two cards below are part of the new Pro Performance cards and they help you to identify the players who are the fastest or the most accurate passers in the UCL. As with all the Match Attax cards in the set, the player names are always clearly identified on the side, which is really useful if you come across a footballer you are less familiar with.

In the top right hand corner you will notice that there is a monetary value, as well as a series of scores for their skills, all of which come in useful when selecting your team for playing the game. 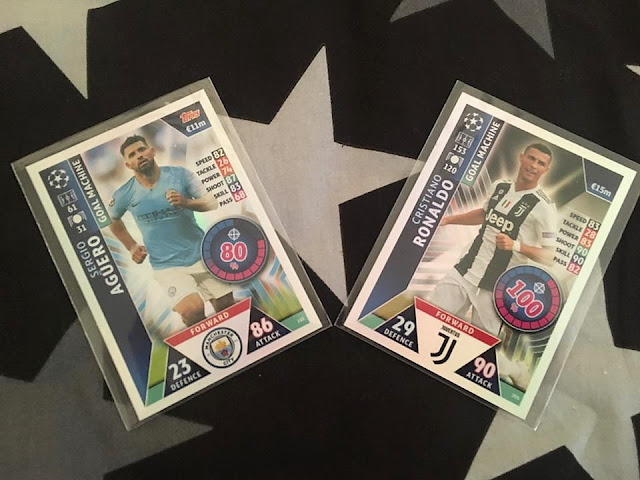 The aim of this two player game is to beat your opponent by scoring more goals, just like in a real match. The rules are easy to follow and understand which helps to make it a simple and fun game for children to enjoy.

Firstly you need to put your team together by selecting 11 players along with 3 substitutes, before laying them down in formation on the game mat which is pictured below. (If you don't have the game mat, then don't worry, you can still play). The first player is then determined by flipping a coin and choosing heads or tails. When selecting your team you should ensure that you adhere to both the formation and tournament rules.

Whoever goes first must choose an attacker or defender, with the opponent choosing the opposite. So for example if I was to select an attacker, then my opponent must select a defender. If your attack scores beat their defence, then you score and vice versa. You then keep the cards to one side so you can easily count the score. It really is easy, yet lots of fun to play and you simply continue with your players throughout the game. In the event of a draw, then no-one wins, so the chooser must make another selection.

Just like in a real game of football, you are able to choose a sub at any point in the game as well as being able to use a team boost card, both of which can improve your chances of winning. Once all the cards have been played, then you add up the score, congratulate the winner and play again! 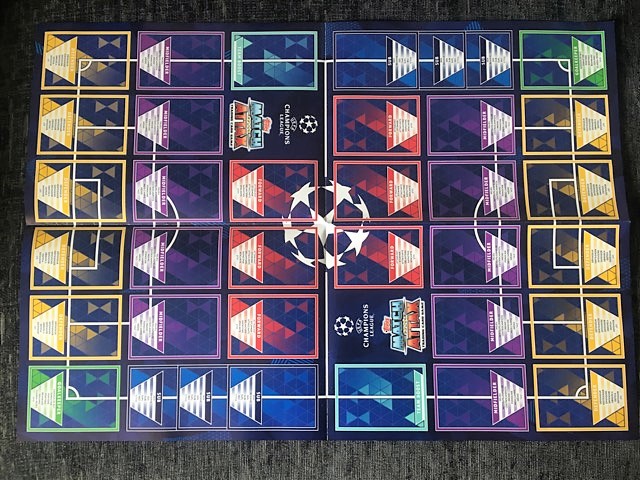 Overall I would highly recommend Match Attax as a great fun trading card game that is available at affordable prices. The guide age for these products is 6+ which I would agree with, as I think this is a suitable age to be able to understand how to play the game correctly. However, I would not say that these collectables are limited to just children as I am sure that there are many teenagers and adults that would also enjoy to collect, swap and play with these cards as well. I think that both the mini tin and mega tin offer value for money and with individual packs also being available for only £1, it is possible to build up a collection at a cost and frequency that is suitable for you.

You can find out more about Topps and Match Attax by visiting their website or social media pages which can be found on the following channels:

Do you have a Match Attax fan in your family? Then why not enter our competition for the chance to win a fantastic bundle of goodies which includes:

For your chance to win, simply enter using the gleam form below and be sure to come back daily throughout March for some extra bonus entries. (Terms and Conditions can be found underneath). Good Luck!

Disclaimer: We were provided with a bundle of Match Attax items for the purpose of writing an honest review of the products. All opinions and thoughts are my own unless stated otherwise.
Posted by It's A Family Adventure at 13:02