The Wizard of Oz at Storyhouse, Chester - Review

On Thursday evening we were invited along to the press night of The Wizard of Oz at Storyhouse in Chester. This is one of our favourite venues in the area and we are very lucky to live less than ten minutes away from such a fantastic arts centre. We have been to a few performances here and have always been very impressed by the quality of the shows on offer. The Wizard of Oz was no exception and we followed Dorothy and her friends along the yellow brick road, in a wonderful and well thought out production. 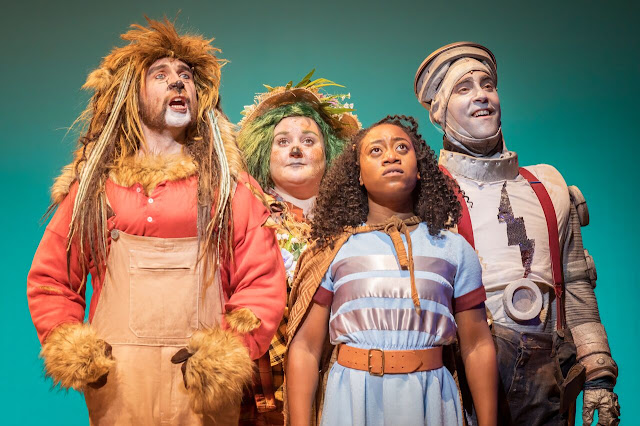 Image kindly provided by Storyhouse
The show was very similar to the film with only a few variations arising from some modern interpretations. We really enjoyed the staging from the beginning and it was great for my daughter to see how the story began and relate it to the characters that Dorothy would meet once in Oz. I did however feel that the introduction was perhaps slightly too lengthy, though that being said I can understand why they have chosen not to rush this part, so that the audience can fully appreciate the relationships between Dorothy, her friends and family.

Consuela Rolle has been cast in the lead role of Dorothy and her portrayal was magnificent throughout. Her energy and enthusiasm ensured that guests remained entertained as the story was performed on stage. I felt that she connected with the audience well and there was a believable vulnerability from the character. When her journey began along the yellow brick road, she was able to exhibit her fear of the unknown, whilst also ensuring that she had a vibrant and positive personality to help lead her new found friends to the merry old land of Oz.

Our favourite scene from the show was actually very early in the production, when Dorothy first met the Munchkins (performed by children from House of Dance). The talented skills of the children involved are highly commendable and their performance of Ding Dong! The Witch Is Dead was absolutely superb. We loved that the choreography had a modern twist, featuring dance moves that the children in the audience could relate to. 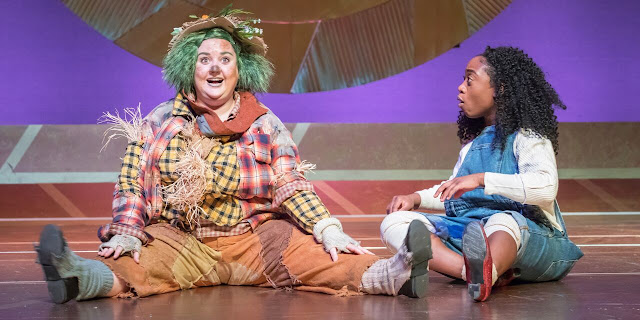 Image kindly provided by Storyhouse
The first friend that Dorothy makes on her journey, is that of the scarecrow, played by Natalie Woods. We all agreed that her acting was wonderful and it was great to see her interaction with Dorothy, which created a convincing friendship.

Ben Oliver's interpretation of the Tin Man brought happiness and laughter to the audience, especially during his explanation as to how he came to be created of Tin. Watching the friendships develop was exciting to see and although we were familiar with the story, there was still an element of intrigue as to what might happen next.

The cowardly lion (Richard Colvin) introduced an element of comedy, which I did feel was needed at times and this could have potentially been pushed further, with the inclusion of a few more witticisms. He played the role really well and soon established himself as a very loveable character. He was in fact our favourite performer of the show and we enjoyed the humour that he delivered.

Kenny Thompson appears as both Uncle Henry and The Emerald City Guard and admittedly we much preferred him in the latter role. We loved the powerful performance he presented in Oz, that made me want to sing and dance along. This was complemented by Natasha Bain who starred as Aunt Em and Glinda the Good Witch, who created a loving but authoritive figure in both roles.

Fergus Rattigan delighted as the intriguing and powerful Wizard of Oz as well as Professor Marvel and I really enjoyed both of his characters. The clever use of technology featured throughout the show, but I particularly liked how this was used to deliver his booming voice over video projection.

Of course the Wizard of Oz wouldn't be complete without The Wicked Witch of the West. This was played by Zara Ramm who had a very commanding stage presence. Her performance was strong, but at no point did I feel that it would be too scary for younger audience members, which helps to make it more family friendly.

I felt that all of the musical performances throughout the show were really entertaining and consisted of perfectly timed choreography, beautiful vocals and plenty of enthusiasm and gusto. Particular highlights included Somewhere Over the Rainbow, Follow the Yellow Brick Road and also the inclusion of Jitterbug.

Overall we thoroughly enjoyed the Wizard of Oz, but with a running time of 2 hours and 30 minutes it is perhaps a little too lengthy for younger audience guests. I think if we had brought my five year old along then he would have definitely got restless at some point. For older children and adults though, then this is a commendable production with magnificent staging, lighting and sound. It was great to see a show of this quality in the local area and it also offers something a little different for a Christmas production. Ultimately it is a well written musical, with a credible cast that offer a talented interpretation of an iconic story.

The Wizard of Oz is appearing at Storyhouse, Chester on various dates until Sunday 6th January 2019, with ticket prices starting from £15. For the most up to date information or to book tickets, you can visit the Storyhouse website here: Storyhouse Chester 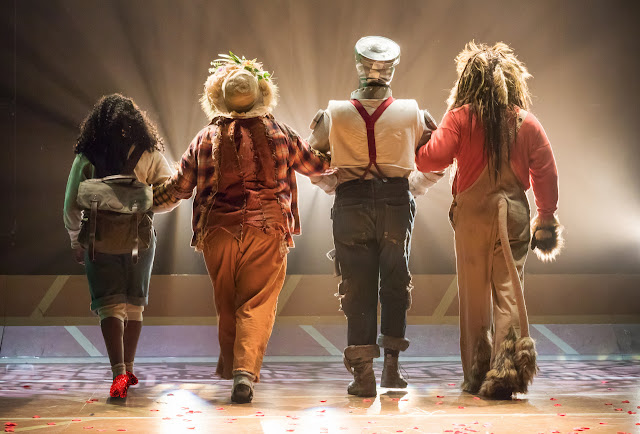