The Snowman Tour 2018 at Parr Hall, Warrington - A Review

Watching The Snowman on television every Christmas has been one of our favourite festive family traditions for as long as I can remember, so when we learnt about the wonderful Snowman Tour earlier this year, we were very excited.

The Snowman Tour from Carrot Productions visits a total of 16 different venues from all across the country this December, including seven cathedrals in Blackburn, Chester, Durham, Gloucester, Lichfield, Liverpool and Winchester. The show brings the magic of the animation alive, as the iconic film is accompanied by a live orchestra and a young soloist who performs the song Walking in the Air. We were invited along to Warrington's Parr Hall to review the show on Thursday evening and it really was a wonderful experience. 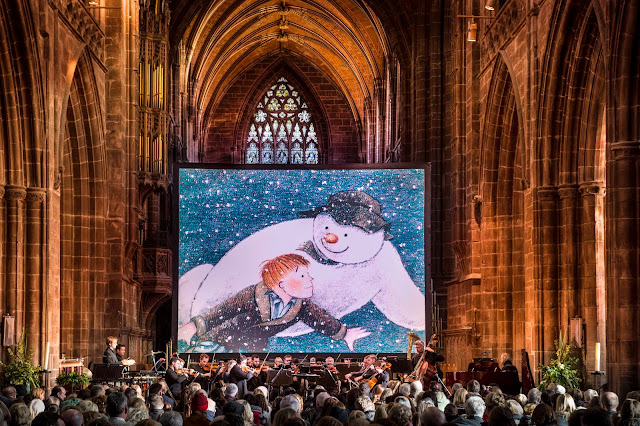 Photo Credit: ©Tom Bangbala
Unfortunately for me, I was informed by the doctor on Thursday morning that I have somehow caught chickenpox, so despite looking forward to this since earlier this year, I was personally unable to attend. I did however have a very willing volunteer to take my place and so my mother in law attended with my family instead and as such the remainder of this review will be written by my husband Mr.F.

The venue of Parr Hall is approximately a 30 minute drive from our home, however it is a venue that we had not visited before. It was very easy to find and with a stroke of luck, we were able to find on street parking right outside the entrance. My youngest son Riley was very excited and began to sing Walking in the Air as we left our vehicle and made our way to the entrance.

To begin with we were treated to a festive overture by the orchestra which featured a variety of well known Christmas songs such as Jingle Bells, Rudolph the Red Nose Reindeer and Santa Claus is Coming to Town. This lasted approximately ten minutes and it was a superb way to start our evening. I was pleased that they had chosen to play songs that the children would recognise and my youngest son loved listening to the music play and naming the tune.

We were then introduced to the different elements of the orchestra, which had been produced in an interesting, but comical way. The gentleman on the double bass began to tell a story as to how the orchestra had reached a venue after becoming stuck in the snow. An animation played on the screen as the narrator delivered an explanation of their adventure. The way it was told allowed children to identify with different instruments which I thought was particularly clever.

Following this was the heartwarming tale of The Bear and the Piano, based on the book by David Litchfield. This animation was narrated by Joanna Lumley, and being a story that I had not been familiar with before, it was very entertaining for my family and I.

It told the story of a bear cub who found a piano in the woods. Over time he grew bigger and gained fantastic musical talent that led him to the city to seek fame and fortune. Eventually he returned back to his home in the woods and was worried that his friends and family may have forgotten all about him, when in fact they couldn't have been more proud. The woodland had been covered with merchandise, surrounded by his friends and family, which led to him performing for the most important audience of all. 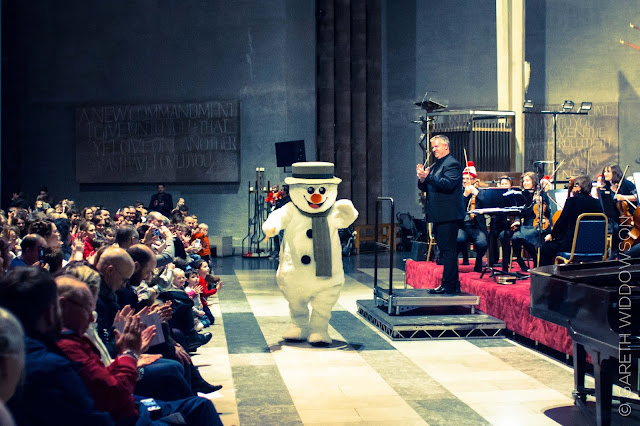 Photo Credit: ©Gareth Widdowson
There was an interval between The Bear and the Piano and The Snowman which lasted approximately 15 minutes. Given that the audience was predominantly families, I think that this interval was a good idea as it provided the opportunity for a toilet break or to purchase a drink. A character costume of The Snowman came out to the audience and waved to all the excited children as it made its way around the venue.

Soon enough it was time for the main event and the atmosphere was absolutely wonderful. My son was captivated by the animation on the screen, however I did try to take the time to also observe the orchestra, who were all extremely talented and quite fascinating to watch too.

A young soloist performed the solo of Walking in the Air and their voice was exceptional. Having watched the animation numerous times over the years, seeing this song being performed live was wonderful and is certainly something that my family will definitely remember.

Overall our family had a wonderful time at The Snowman Tour and it was a truly magical experience. It was the perfect opportunity for my youngest son to be introduced to an orchestra and learn more about the instruments and musicians involved. I felt that the way the show had been presented was really well thought out and the inclusion of the Christmas overture and The Bear and the Piano certainly added further enjoyment. It is the ideal show to get you in the festive spirit and we would like to thank Carrot Productions for creating such a beautiful presentation of this heartwarming animation.

If you would like further information on The Snowman Tour 2018 or to check remaining availability, then you can visit the Carrot Productions website here. 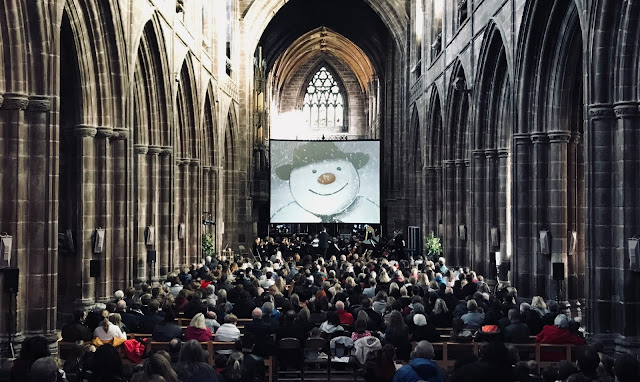 Photo Credit: ©Gareth Widdowson
*Disclaimer: We were provided with 4 tickets for the purpose of writing an honest review of our experience. All thoughts and opinions are my own unless otherwise stated. Review written by Mr.F. Images are from previous tour and do not feature the Warrington Parr Hall venue.