Our visits to Christmas events are well and truly under way and so far we have attended some fantastic family friendly attractions and productions. Whilst entertainment and fun are the main characteristics we usually look for, we also love those that have that special Christmas magic to help create beautiful moments and memories.

Last year we watched a truly captivating show called "The Bear" at Waterside Arts Centre in Sale, which was created by the very talented team at Pins and Needles Productions. It touched every emotion possible and was the perfect introduction to theatre for my youngest son Riley. We were therefore absolutely delighted to hear that the team would be returning this year to bring another of Raymond Briggs' stories to the stage, the lovable Father Christmas!

We were invited to attend the press evening on Thursday and of course we gladly accepted the invitation. Both my husband and I decided to attend with our youngest son only, since he still very much believes in Father Christmas and we always find it nice to give each of the children some time with us on their own so that they get our full attention. We therefore thought that this would make it a lovely special time for us to enjoy together. Riley absolutely loves drama, dancing and music and although he can be quite shy around others, he is always putting on some kind of show or performance at home. This past year he has attended numerous productions and seeing how much he loves the theatre is always a delight to see.

The venue of Waterside, is a lovely arts centre and we have been impressed each time we have visited. We love the little additions that make the theatre so welcoming for children; for example Milk & Cookie packs, along with the option to come in your pyjamas to the slumber shows. This helps to create a really relaxed environment which I think is really beneficial for families of all ages attending the production.

The show itself tells the story of the grumpy but loveable Father Christmas and we followed his activities as he prepared for his busiest day of the year; Christmas Eve. Rather astonishingly this production consists of only three cast members, all of whom are extremely talented and draw you into the show from the very start.

Mike Aherne stars as the bloomin' marvellous Father Christmas and his portrayal of the character manages to display the loving, warm and friendly side of Father Christmas' personality along with his grouchiness. The opening scene was something that most of us could also relate to, which was when he woke up for work. Riley found this particularly funny as he knows how much our family struggle to get out of bed in a morning! A very funny scene followed shortly after when Santa popped to the loo and it was lovely to hear all the giggles from children sat in the audience.

Our personal highlight of the show was when Father Christmas boarded his sleigh and set off for his Christmas Eve duties, which was so magical and delightful to watch. Led by two puppet reindeers, it looked really spectacular and Riley was absolutely astonished as he sat watching open mouthed. 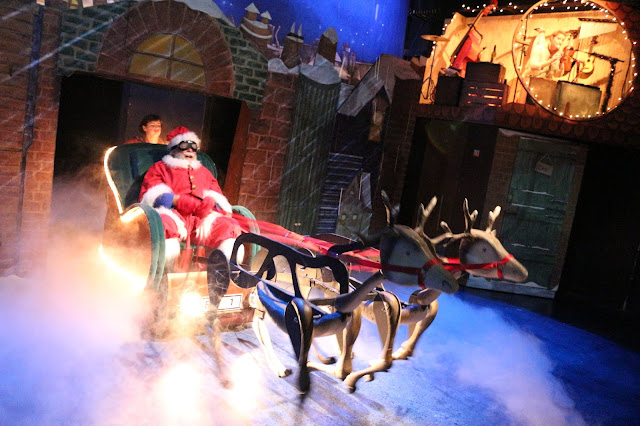 Another favourite for me was when Father Christmas was amongst the roof tops and needed to navigate his way down the many chimneys. The set and staging looked wonderful and had been really well thought out. Watching him move along the many steps that I hadn't previously noticed, made me realise how much effort had gone into developing such a creative set design.

Richard Booth features as the talented puppeteer and we actually found it quite amazing how you could relate to a puppet and its feelings simply based upon a persons movement. The cat, dog, chicken and reindeer became completely believeable and even Riley commented that the way they moved or reacted seemed really genuine. He also mentioned that he kept forgetting that the puppeteer was there, which meant that he had become focused on the puppets instead of the person controlling them.

Katy Sobey was superb providing not only the music, but all the accompanying sound effects too. It was great to see how the noises were being created and it gave us a great insight into the different roles within the theatre. She would replicate sounds associated with Father Christmas' actions, so for example when he poured his cup of tea, a jug of water would be poured into a glass by the microphone. Riley couldn't believe how she made some of the sounds and his particular favourite was when the cooker hob was lit as he said it sounded so realistic.

Overall we had a wonderful time at Father Christmas and we felt that it was a truly beautiful production. The cast members were all extremely talented and watching the story being told on stage was simply enchanting. Packed full of live music, hints of comedy, wonderful acting and most importantly Christmas magic, it is certainly a show that I wouldn't hesitate to recommend to others.

*Disclaimer - We were invited to watch Father Christmas as guests of Waterside, for the purpose of writing an honest review of the show. All opinions and thoughts are my own unless otherwise stated.
Posted by It's A Family Adventure at 16:06