Cinderella at the Manchester Opera House - A Review

My family and I have been looking forward to this pantomime all year, ever since the casting of the Ugly Sisters was announced back in April. In what I would consider to be a stroke of genius, the pairing of Connor McIntyre and Les Dennis meant that I had no doubt in my mind that we would be in for a great night, and we were definitely not disappointed. Although our initial focus had been on these two characters, it soon become apparent that the entire cast excelled with talent and it was a whole team effort that created a laugh a minute show from start to finish.

As the lights began to dim, there was a sense of excitement throughout the theatre, whilst the audience waited in anticipation. We were introduced to the Fairy Godmother played by Hayley Ria-Christian who has an absolutely stunning soul voice. She caught our attention immediately and her performances throughout the night were beautiful and a pleasure to listen to. She exhibited a lovely warm and friendly personality and we knew from the beginning that we had a great show ahead. 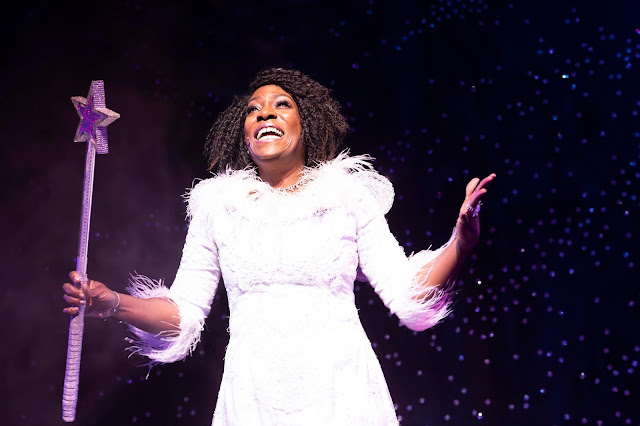 Photo Credit: Phil Tragen Photography
When Cinderella (Shannon Flynn) took to the stage it was clear to see that she suited the role perfectly. She was a familiar face for my children as they recognised her from CBBC and so they were looking forward to seeing her perform in pantomime. We found some of her collaborations with Buttons (Ben Nickless) really funny, along with a particular scene involving the Ugly Sisters shopping bags. Her vocals were lovely and you could see that she seemed very comfortable with her performances. The constant smiles and sometimes unexpected giggles ensured that her presence on stage was enjoyable to watch. There was a quick change scene involving Cinderella and The Fairy Godmother that also added a wonderful element of magic and left my children asking "How did they do that?" Though this was quickly followed by the most superb horse and carriage which literally took to the skies above the audience. Everyone watched in amazement at this stunning sight and it was obvious that no expense has been spared in creating such a beautiful moment.

Prince Charming is played by the delightful Gareth Gates and it was superb to see him perform the song Unchained Melody. I had secretly hoped beforehand that he would sing this, so it was definitely an added treat for me. He worked well alongside Cinderella in creating a believable chemistry and the wall scene in the woods when they first meet is absolutely hilarious.

Dandini (Jack Wilcox) was wonderful and has that likeability factor. We have seen a few different performances of Cinderella over the years and my daughter Emma said that his portrayal was by far her favourite. 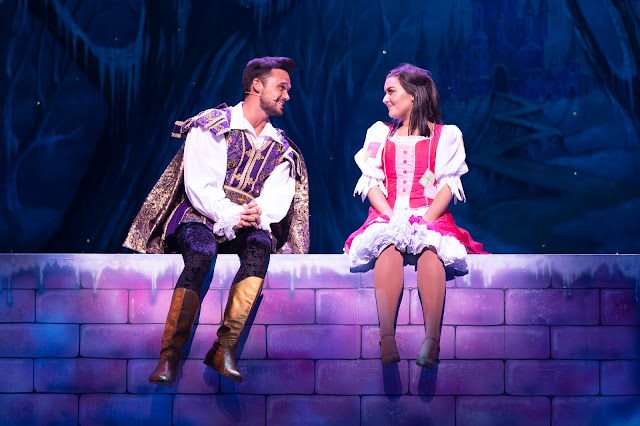 Photo Credit: Phil Tragen Photography
When the Ugly Sisters first took to the stage there was a large cheer that resounded throughout the Opera House. It was the moment we had all been waiting for as Phelena & Michaela appeared. Phelena is played by Connor McIntyre (best known as Pat Phelan in Coronation Street) and Michaela is played by the legendary Les Dennis. It was an absolute delight to see these two perform on stage together and their performances far exceeded our expectations. There are plenty of references and quips relating to Coronation Street which provided numerous belly laughs. We absolutely loved the outrageous costumes which seemed to grow in extravagance in each scene. Our personal highlight though has to be the performance of "If I Were Not" which also included Gareth Gates and Ben Nickless. We were all close to tears from laughing so much and although we have seen this routine performed elsewhere before, the cast involved created a whole new dynamic of fun, that my children spoke about all the way home. 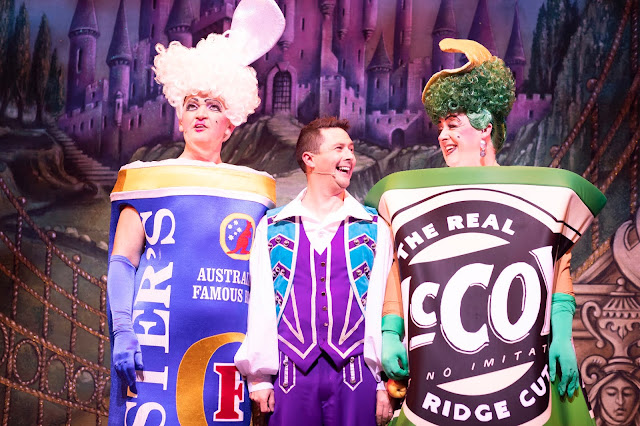 Photo Credit: Phil Tragen Photography
My favourite scenes however, were those that contained Buttons (Ben Nickless). I will be honest when I say that I personally hadn't heard of him before, but I am certainly aware of him now and genuinely hope to see him again on stage in the future. He is what I would consider to be an all round entertainer and brings with him a wide range of skills that offer far more than just jokes. Along with bringing continuous comedy to the stage, he was also incredible at impressions, with his Michael McIntyre, Gary Barlow and Ozzy Osborne being absolutely spot on. At one point he performed an Elvis Presley song and it was so wonderful hearing all of the laughter created throughout the theatre. Another highlight was when he appeared on stage alongside a talking bear, which was not only funny, but also a really sweet moment too that created lots of aaahhhs. 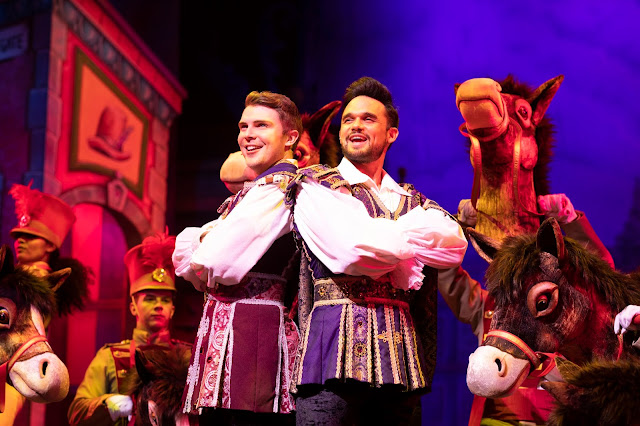 Photo Credit: Phil Tragen Photography
The ensemble featured some highly skilled performers who dazzled throughout, in their vast array of costumes. There were also some wonderful dancers from the Stalder Academy of Dance who helped to create some of the most memorable scenes with their superb choreography, dancing and gymnastics. I am always extremely impressed by talented young performers and it was clear to see their passion for performing arts. Whether dancing to a fast paced number or displaying their acrobatic skills, everything was just perfect and I am sure that there were plenty of proud parents in the audience watching their children on stage.

Of course no production would be complete if it wasn't for the creative team as well. It can sometimes be very easy to forget the efforts that go on behind the scenes with the writing, choreography, costumes, scenery, special effects, lighting and sound and this pantomime exceeded our expectations in those elements too. Ultimately it is the combined effort of all involved that makes a show successful and I have no doubt that audiences will love Cinderella during its December run.

Without a doubt QDOS Entertainment have pulled out all the stops in producing a highly entertaining show. There truly was never a dull moment and the cast and creative team have succeeded in delivering a production that is suitable for all. Packed full of all our favourite panto characteristics, along with plenty of audience participation, this definitely ticks all the boxes. Overall, Cinderella provides entertainment and comedy in abundance which makes it a must-see pantomime this festive season!

*Disclaimer: We were invited to the press night performance of Cinderella for the purpose of writing an honest review of the show. All opinions and thoughts are our own. This post contains an affiliate link.
Posted by It's A Family Adventure at 13:53