Our Review of the Num Noms Lip Gloss Truck Playset

Num Noms are the super cute collectible range that not only look like food, but smell like it too! By mixing a num and a nom you can create your very own flavours and make deliciously scented treats. Some also contain surprises such as lip gloss or nail varnish which are sure to be popular with any mini-makeup fans.

Some people may consider the Num Noms Lip Gloss Truck to be a 'girls toy', but my son Riley loves all kinds of toys, whether that be his trains, cars and building tools, or his dolls house, princess teddies and kitchen. He absolutely loves pretend play and can use his imagination to create many different scenarios that help him to have fun. When opportunities arise for product reviews such as this one, I will always ask Riley whether it is something he would want to try out and when he saw the Num Noms Lip Gloss Truck, it was a definite YES PLEASE! 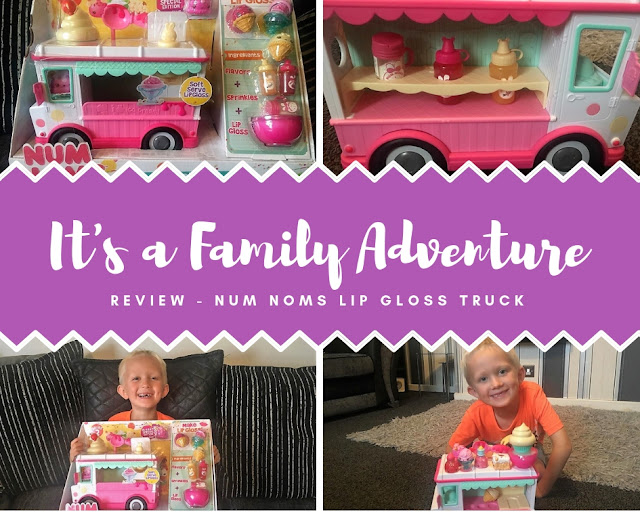 I explained to him that you could create your own lip gloss using the truck and he was so excited by the thought that he could make his mummy some special make-up all by himself, as well as having a super cool truck to add to his vehicle collection. He loved how cute the Num Noms looked and waited very patiently for the product to arrive a few days later.

On arrival, it was much bigger than he had expected, so he was really excited to open up the packaging and put it to the test. His older sister was on hand to help him out with the scissors and she carefully removed all the packaging for him. Some parts were a little tricky, so I would definitely recommend having a grown up on hand to help remove all the pieces from the box. 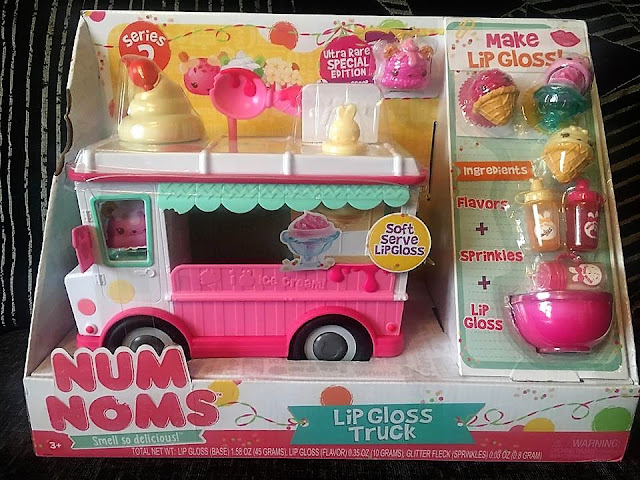 Inside the packaging the product contained:

The truck was already assembled, so all Riley needed to do was place the smaller individual items into the Lip Gloss Truck. He excitedly picked up the ingredients to make the lip gloss and decided that he was going to make some for his sister first. There is a large tub of lip gloss provided and you simply scoop some of this, add one of the flavours (cleverly designed as sauce bottles), finishing off with some glitter sprinkles. You can then place this in the 'Mr Whippy' style ice cream dispenser and push the lip gloss through using the plunger provided and into your chosen pot, cone or ice cream glass below. 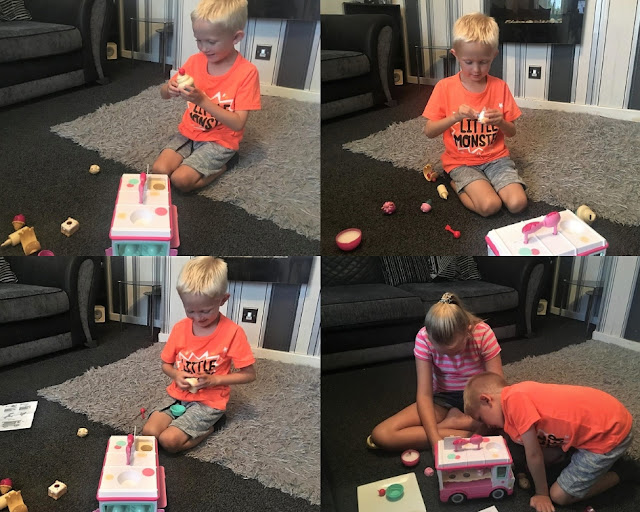 Riley absolutely loved pretending he was an ice cream seller and made several different flavours of lip gloss for both his sister and me. He then pretended that he had his own shop and we had to smell and test out his creations. He then decided that it would be a 'drive-through' ice cream stall where you could purchase ice cream or make-up, so he got all of his other toy vehicles and made them form an orderly queue. It was certainly a toy that inspired Riley to use his imagination and creativity, which was great to see.

It is a multi-purpose toy, so as well as the facility to make lip gloss, it can also be used as a play set and toy vehicle as the wheels move around easily. The handle on the top makes the toy easy to carry and all of the contents can pack away nicely inside or on top of the truck. Visually it looks bright, colourful and appealing and certainly stands out.

Riley asked me a couple of times why there was no music and in fairness I can see his point. In a product that looks just like an ice cream truck, it would have been great to have had a button that played some tunes whilst being moved around. If I was to make any changes to the toy then the addition of some music, sound effects or lights would be it. 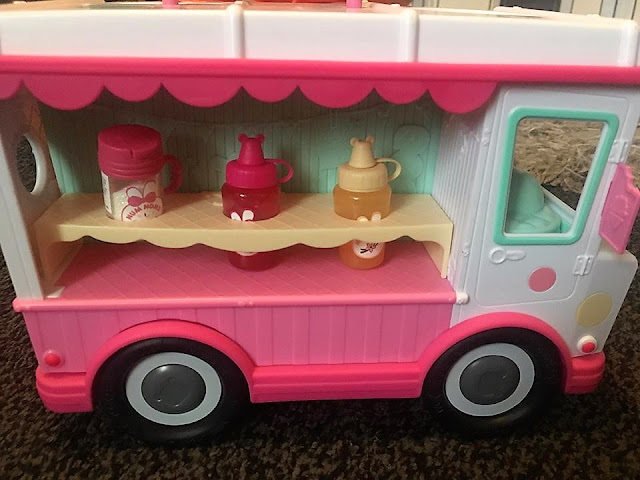 There is enough lip gloss base provided to make six good sized portions and Riley made three lots during his first time of playing with the toy. He is five years old and found the process easy enough to do by himself, though I would always recommend parental supervision just in case of any mishaps or spillages.

As you can imagine the lip gloss does get sticky and a little messy too, so it is best to clean the dispenser, cupcake tool and spatula as soon as you have finished creating. I found that soap & water didn't work too great in removing all the lip gloss, so Riley suggested using baby wipes. This was an excellent idea as these worked perfectly in cleaning the entire truck ready to be used again.

Overall we thought that the Num Noms Lip Gloss truck was great. We all had so much fun making our own creations and I couldn't help but have a go myself. I think the toy is well designed with minimal small parts and it is very easy to pack everything away. We loved its versatility of being a creative toy, but also one that could be used as a vehicle in other imaginative ways. I like the fact that once all the lip gloss has been used and made, Riley will still have a truck that he can play with whenever he wants which is great. With an RRP of £29.99 I think it represents good value for money and appears to be a good quality product.

It is available to purchase from Argos, Smyths, The Entertainer, Amazon* and all other good toy retailers.

If you would like to find our more about the Num Noms range, then you can visit their website or social media pages on the following channels: 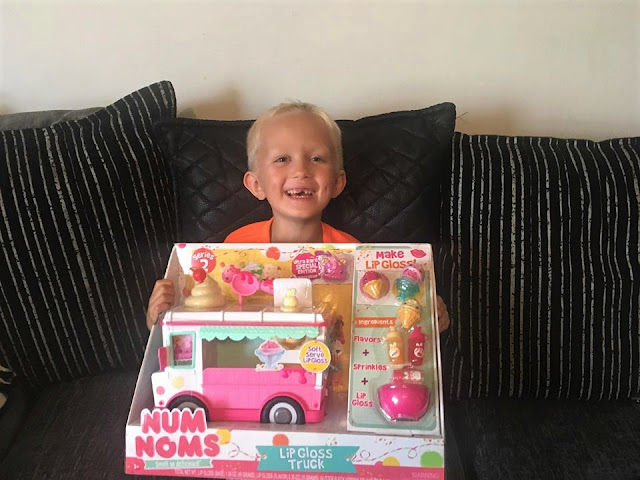 Disclaimer: We were sent this product free of charge in order to provide our honest review of the product. Thoughts, opinions and photographs are my own unless otherwise stated. *Link to Amazon is an affiliate link which means that I may receive a small commission should you choose to purchase an item from their website.
Posted by It's A Family Adventure at 18:46