Michael Harrison and David Ian are delighted to announce that Anita Dobson will star as 'Miss Hannigan' in their smash hit production of the musical "ANNIE" playing at Storyhouse, Chester from 25th March to the 30th March 2019. Further casting is to be announced.

This production recently ran for an extended season in the West End following a sell-out tour of the UK and Ireland in 2015/2016 as well as a recent sell-out season in Toronto.

As Angie Watts in Eastenders, Anita Dobson created one of the most popular characters in television winning numerous awards. Her West End theatre credits include 'Madame Morrible' in "Wicked", 'Mama Morton' in "Chicago", 'Mrs Meers' in "Thoroughly Modern Millie", 'Chris' in "Calendar Girls", 'Joan Crawford' in "Bette and Joan" and 'Nancy' in "Frozen" at the National Theatre for which she was nominated for an Olivier, Evening Standard and London Critics Award. Her film credits include "London Road". 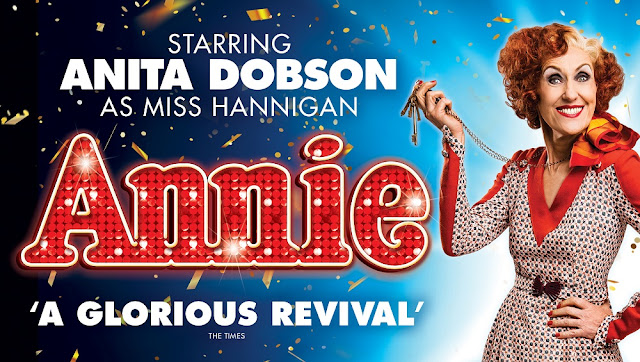 Set in 1930s New York during The Great Depression, brave young Annie is forced to live a life of misery and torment at Miss Hannigan's orphanage. Determined to find her real parents, her luck changes when she is chosen to spend Christmas at the residence of famous billionaire, Oliver Warbucks. Spiteful Miss Hannigan has other ideas and hatches a plan to spoil Annie's search.....

With its award-winning book and score, this stunning new production includes the unforgettable songs 'It's the Hard Knock Life', 'Easy Street', 'I Don't Need Anything But You' and 'Tomorrow'.

"ANNIE" has Music by Charles Strouse, Lyrics by Martin Charnin and a Book by Thomas Meehan. "ANNIE" is directed by Nikolai Foster with set and costume design by Colin Richmond, choreography by Nick Winston, lighting by Ben Cracknell and sound design by Richard Brooker. "ANNIE" is produced by Michael Harrison and David Ian.

*Disclaimer - Details provided are correct at time of writing, but are of course subject to change. I would therefore always recommend visiting the venues own website, in order to obtain the most up to date information.
Posted by It's A Family Adventure at 15:52