Family Fun at the CBBC Summer Social, Liverpool - A Review

This weekend, the wonderful city of Liverpool played host to the BBC's biggest ever children's event - the CBBC Summer Social 2018! Featuring a jam packed schedule of entertainment, which combined the very best CBBC talent along with global artists, it certainly provided something for everyone to enjoy at this spectacular family festival. 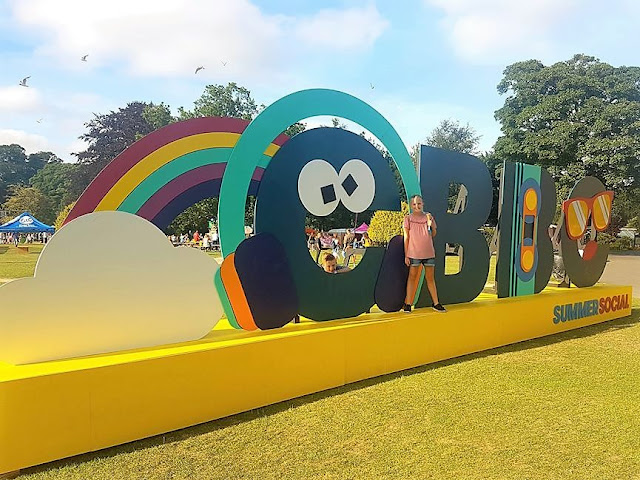 For the last two weeks my children have talked non stop about the CBBC Summer Social and they have been on countdown to the event, ever since I told them we were attending. My daughter Emma had been on the website and made notes about who she wanted to meet and who was performing and my eldest son Ben had been checking out the stage times so that they could plan the day around their favourite CBBC stars! My youngest son Riley was also looking forward to the event, especially when I told him that Hey Duggee would be performing The Stick Song! Stttiiiiicccckkkkk!

The setting for the CBBC Summer Social, was the beautiful Croxteth Country Park, which is located only a few miles from Liverpool City Centre and was held from Friday 3rd August to Sunday 5th August. The guests and performers varied slightly each day and so after speaking to the children, we decided to attend on the Saturday when most of my children's favourite acts were in attendance. 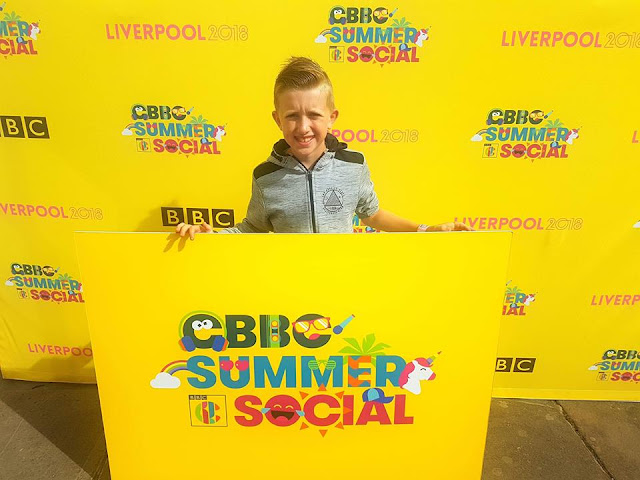 Our journey from North Wales took approximately 35 minutes and the venue was very easy to find. It was well signposted from the main roads and despite not visiting Croxteth Country Park before, we found the event with ease.

On arrival everything appeared extremely well organised and there were car park attendants on hand to guide guests to the vehicle parking. We had a permit for the day, but I believe that parking tickets could also be purchased in advance by guests, or alternatively on the day for £10 subject to availability. I felt that this was a reasonable price for a full day event.

Once parked up, we made our way over to the bag search and again this was very well ran. Bags were searched for prohibited items and it was reassuring to see that security was being taken very seriously. The queue to get in moved quickly and within a few minutes we were on our way into the event, excited about the day ahead. 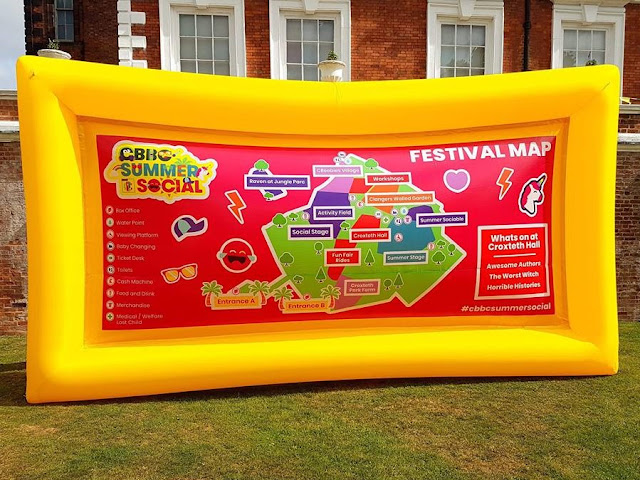 As we entered the main event site, we saw this super cool inflatable festival map, which showed us where everything was. We loved the bright summery colours and these ran throughout the event creating lovely vibrant surroundings.

After taking a look at the map, we decided to take a walk around together to get our bearings and see where everything was. We intended to stay for the whole day, so we went for a wander so the kids could see where each of the stages were and how to get from place to place. With it being so busy, we also picked a central point where we could meet, if any of us became separated or got lost.

We double checked the schedule for each stage for the day and made a plan of action so they we could enjoy as much as possible from what was on offer. Riley was really excited to spend some time in the Cbeebies Village, where as Emma and Ben were looking forward to all the meet and greets that were available along with the live performances on the Summer Stage. We realised that at some point we would need to separate so that all my children could enjoy what they wanted to do, but this was only for brief moments throughout the day and actually ended up working really well. 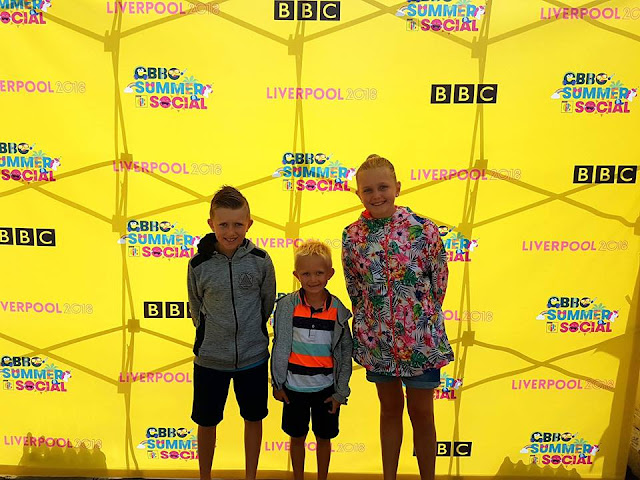 After checking the time, we realised that Mr Tumble would soon be taking to the Summer Stage and so we all made our way over to the large grass lawn to grab a spot where we could enjoy the entertainment and some refreshments. Although the whole site was really busy, there was plenty of space and at no point did we feel crowded or enclosed. We found some space and placed our picnic blanket down and Riley and I enjoyed 'Something Special' as we watched Mr Tumble on stage. 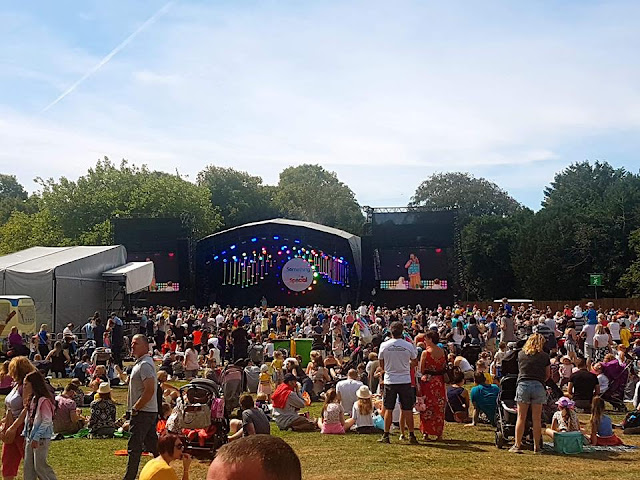 The atmosphere was fantastic and the crowd were really responsive, so it was great to see families of all ages jumping up and down and dancing together. Although Emma and Ben have outgrown Mr Tumble now, they did enjoy watching him as toddlers and still catch the occasional episode when Riley is watching Cbeebies, so enjoyed this entertainment too, before heading off to meet the man himself. Unfortunately Riley can be very shy, so was too nervous to meet him, but Mr Tumble very kindly recorded a video message for him to say hello, which I thought was absolutely lovely. 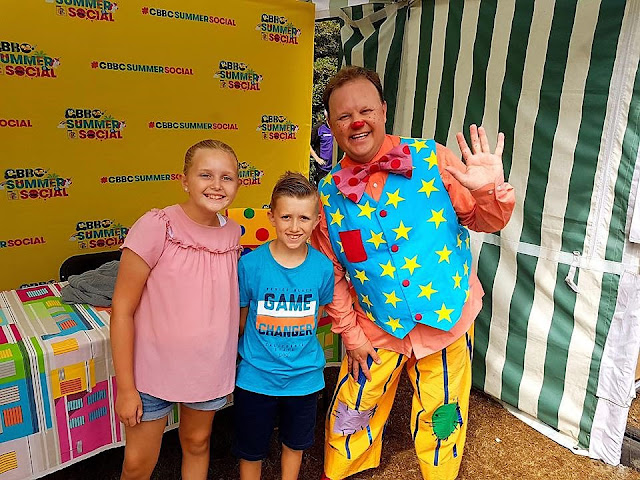 For the next couple of hours, Emma and Ben spent their time between the meet & greet area and the Summer Stage watching the acts in between. They were in their absolute element meeting some of their favourite stars and they managed to get some fantastic pictures throughout the day. Everyone was so friendly and took the time to have a little chat, which made the experience really personal to each guest. The queues did fluctuate throughout the day, depending on who was available for a meet & greet, but these were managed well and there was a board outside the entrance that gave a list of times for each celebrity. 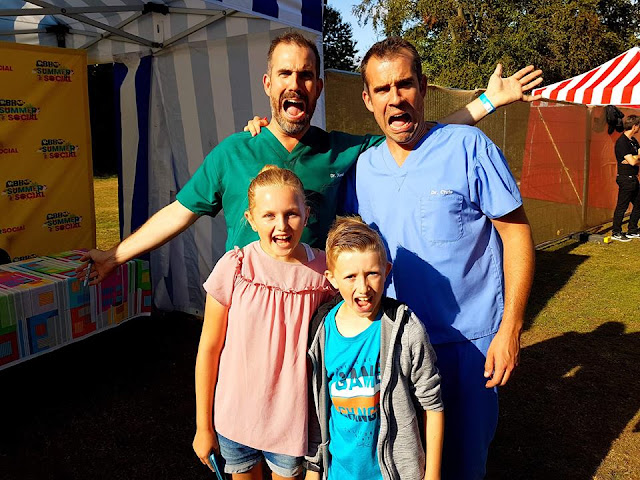 Emma particularly enjoyed meeting MerseyGirls who rose to fame on Britain's Got Talent back in 2017. Not only were they a lovely group of young ladies, but were also fantastic performers and provided the background dancing for some of the artists when they took to the stage. 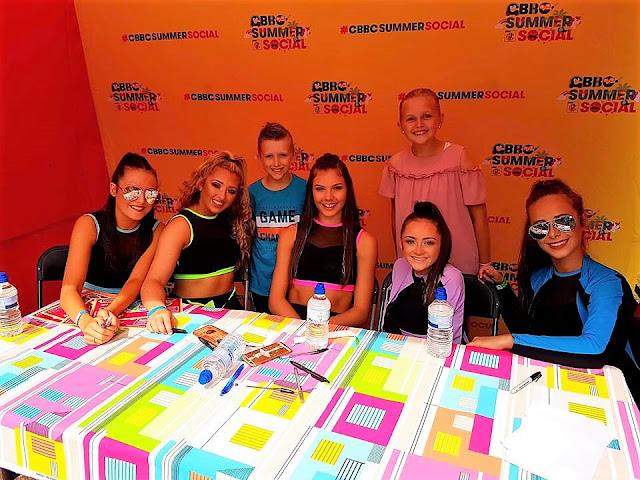 In addition to the Summer Stage, there were also two other stages which were the Social Stage and the Cbeebies stage. These all provided a fantastic line-up of acts and Riley and I enjoyed a lovely couple of hours watching Cook & Line from Swashbuckle, Dr Ranj and Jobi from Get Well Soon, Go Jetters and the wonderful Hey Duggee with The Stick Song. 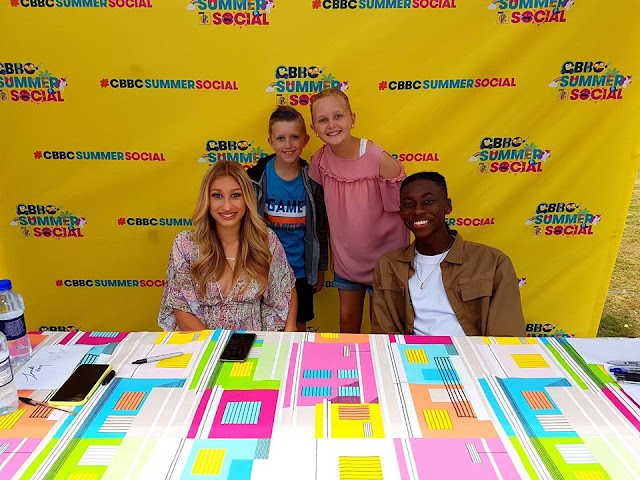 Located around each stage was a whole host of other activities to enjoy which included The Worst Witch Spells Academy, Horrible Histories at Croxteth Hall, Football Skills with the Liverpool Football Club Foundation and Everton in the Community, Match of the Day Kickabout and a Boxing Heroes fitness activity to name just a few. 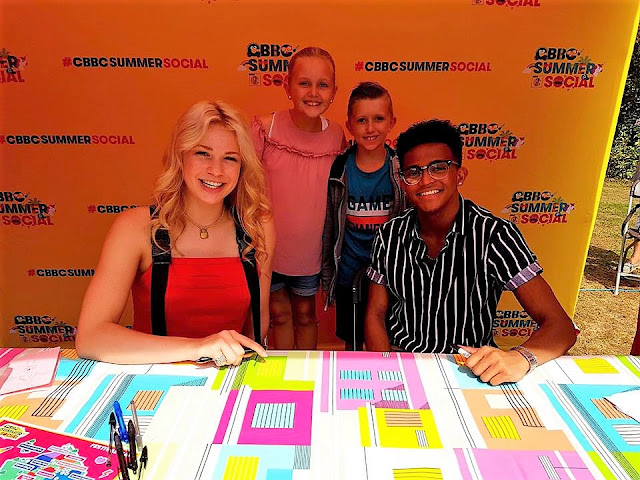 Croxteth Park Farm was also open to guests and it was lovely to take a walk around a working farm and see all of the animals. Rory & Ferne from Vets Tales could also be found there talking about the animals and providing fun facts whilst guests could be seated on hay bales. In the barn across the courtyard a very fun and gooey activity took place in the form of a slime making workshop with Scream Street Slime and the Science Museum, which my children absolutely loved taking part in. 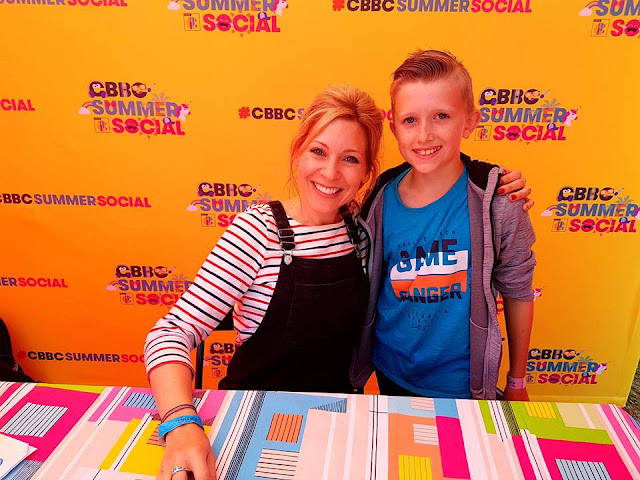 Raven was also at Jungle Parc where you could swing through the trees and solve some clues, however we had not realised beforehand that this was a bookable activity and so we were unable to participate in this. It sounded great fun though and it was our own fault for not double checking at the ticket desk when we first arrived, as the pre-booked activities obviously filled up quickly on a first come first served basis. 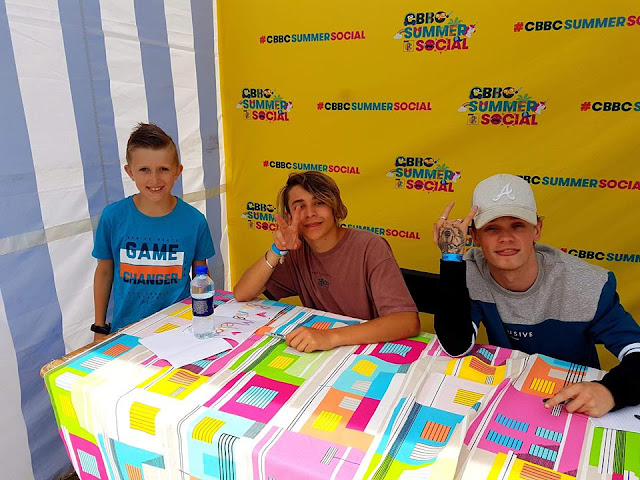 One thing that we were extremely impressed with, was the amount of different food stalls available. We regularly attend events and more often than not the food is usually just burgers, chips and hot dogs. However the CBBC Summer Social had a huge array of different food stalls available that catered for all tastes and offered healthy food options too. These were located all around the Summer Stage area and opposite the Social Stage and the choice was fantastic. 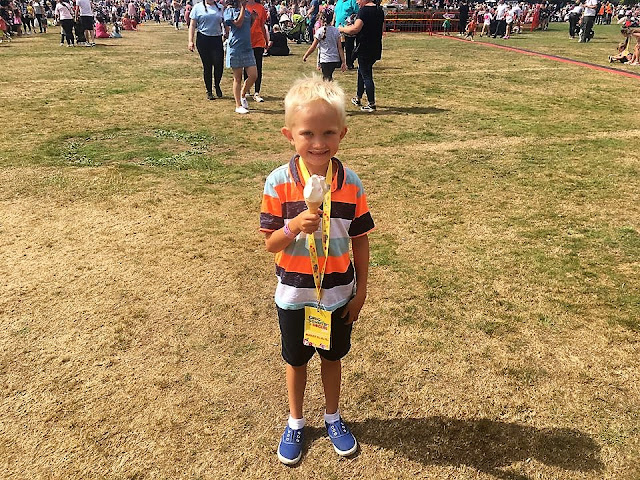 For added enjoyment there were fairground rides placed around the site. These did carry an additional charge of £2 a go, but Emma and Ben had focused their attention on all the other activities and so there was only Riley that wanted to have a go on these, which saved me a small fortune. I actually only took £30 in cash with me to the event as I knew that there were cash machines available and I had expected to utilise these, but even after several fairground rides, four ice creams, a helium balloon and some hot food for Mr F, I still came home with £4 change so was very happy with this! 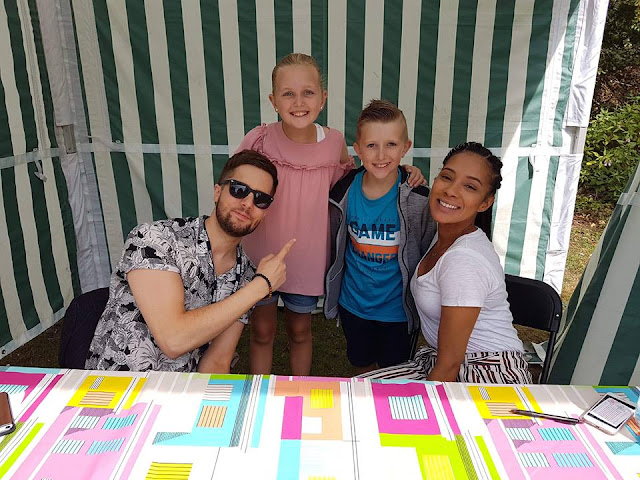 Emma also noticed a CBBC tent that was inviting guests to apply to star on a new CBBC Family Entertainment Programme. She currently attends theatre school and would love to be on television so she was very quick to take the opportunity to fill in the application form. It took her about half an hour to complete and then she took part in a short screen test, where a CBBC representative filmed approximately thirty seconds of footage, so she was very excited to apply for this. 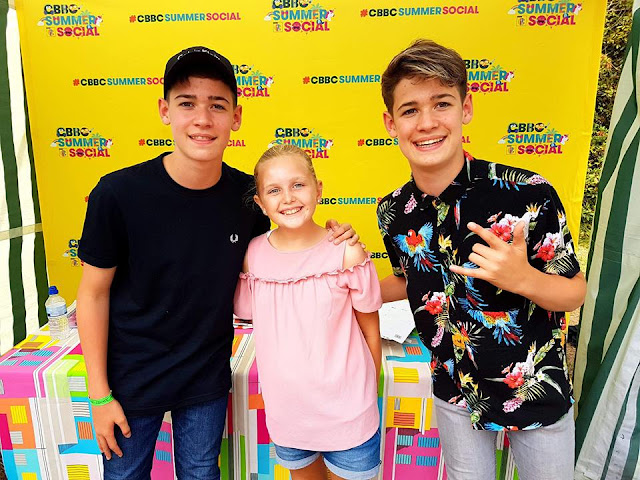 Overall we had an absolutely fantastic time at the CBBC Summer Social and really hope that this becomes an annual event going forwards. There was so much for families to enjoy and we felt that the whole event was really well organised and offered something for everyone. We could have quite happily returned the following day to have made a weekend of it, as there was so much to do we didn't manage to fit it all in. We all loved the CBBC Summer Social and hope to see it become a regular feature on the summer holiday calendar! 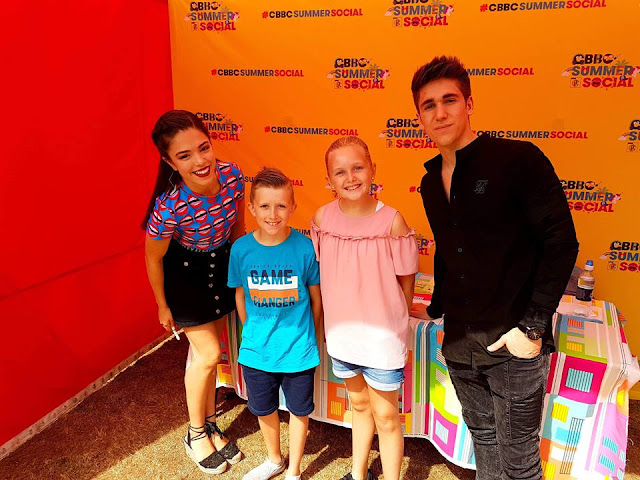 Disclaimer: We were invited as guests to the CBBC Summer Social 2018 in order to write an honest review of the event. Opinions and photographs are my own, unless stated otherwise.
Posted by It's A Family Adventure at 10:49