Our Fun Family Adventure at Inflata Nation Cheshire - A Review

On Friday evening we were invited to a very special launch party, to celebrate the opening of the brand new Inflata Nation Cheshire. I had seen some advertising on social media during the past couple of weeks for the new attraction and thought it looked fantastic, though I was a little unsure as to how the concept would work or how big the inflatable park really was. We therefore jumped at the chance to enjoy a sneak preview of this fun filled venue and learn more about what Inflata Nation could offer for an enjoyable family experience.

Inflata Nation Cheshire is based in Runcorn and using the sat nav we found it with ease. It is ideally located within each reach of Cheshire, Merseyside and also North Wales, with our journey from Flintshire taking only 20 minutes down the M56. There is parking available outside for guests travelling by car, but it is also accessible by public transport, with both a train station and bus stops nearby. 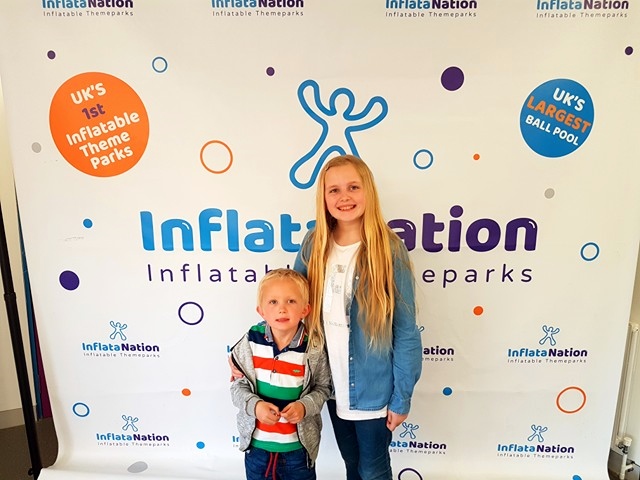 We made our way into the building which had a large reception area, with plenty of room for guests. We were asked to fill in a waiver form prior to entering the arena, which you can also obtain online and print off, if you would rather fill it in beforehand.

Safety is of great importance to Inflata Nation and there are plenty of signs around the building giving guidance on the safe use of the equipment. There is also a safety briefing prior to bouncing and plenty of supervisors in the arena, who all work together to help create a safe environment.

As with any physical activity there is always a risk of injury, but having read the rules and the waiver, I was more than happy to sign and allow my children to participate. I could see that there were plenty of health and safety measures in place, which offered me lots of reassurance.

Anyone bouncing must wear socks and it is also recommended that you wear a long sleeve top and trousers to prevent any friction burns whilst using the slides. My daughter wore a short sleeved tshirt and a long sleeved lightweight shirt over the top that she could easily remove to keep cool when she wasn't using the slides. Ben wore a long sleeved tshirt, but we purposely picked one with loose sleeves, so that he could roll these up when just bouncing so that he didn't get too hot. We found that this worked well for us and ensured that the children stayed cool, but also had their arms and legs protected when needed. 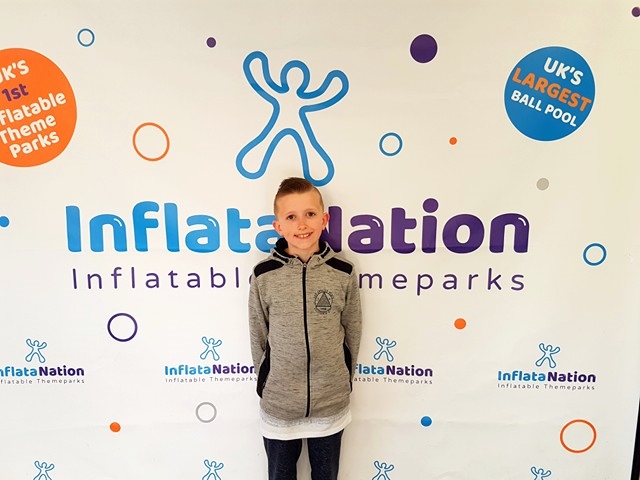 As we entered the arena my children ran over to the inflatable theme park. I had seen some images online of the Manchester venue which opened last year, so I had some idea of what it would look like, though this far surpassed my expectations. Firstly the size was much bigger than what I was expecting and I was shocked at just how large the inflatable was. My children had never seen anything like this before and my youngest son Riley simply kept repeating "Wow,this is amazing!"

Before bouncing we also had the opportunity to speak to one of the owners Michelle Ball, whose enthusiasm and passion for Inflata Nation was clear to see. Both Michelle and her husband Matt are no strangers to creating fun family friendly attractions, having previously been responsible for the Jump Nation trampoline parks. However, the popularity of trampoline parks has soared in recent years and the amount of competition has also rapidly increased. They therefore decided that they wanted to develop something new and exciting for both kids and adults alike and Inflata Nation was created. 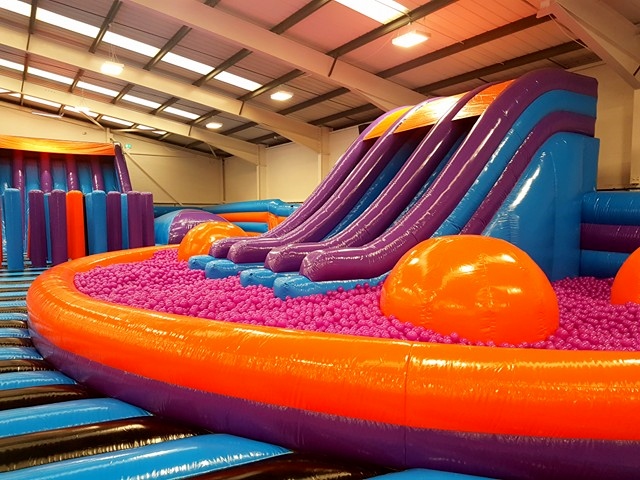 As more children arrived, the arena filled with excitement as everyone eagerly awaited to be told that they could begin to bounce. Everyone was waiting patiently on the mats and I think all the guests had an idea of where they were going to go first, because as soon as the signal was given, children ran off in all directions! Now I have mentioned the children at the attraction so far, but the best thing about this place is that it is suitable for the WHOLE family, not just the kids. The majority of adults soon followed the children and it was fantastic to see families having so much fun together, because lets face it, adults want to enjoy themselves too!

Due to there being numerous different areas on the inflatable, there wasn't one individual place that seemed too crowded and all guests appeared to distribute evenly across the arena. Activities included the Inflata Drop, Inflata Wall, Inflata Race and Inflata Duel to name just a few. 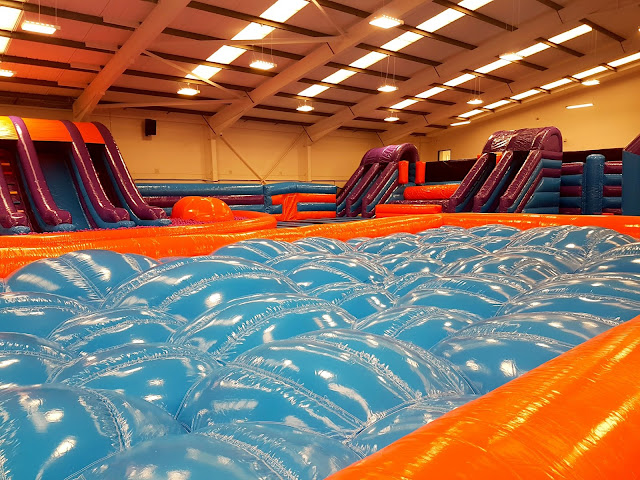 My youngest son's favourite was the Inflata Drop, which is Inflata Nation's signature slide that sends you speeding down into a giant ball pool. He absolutely loved this and must have gone down this slide at least twenty times. It was also a lovely moment for me, being able to watch him climb round each time, with such happiness on his face. 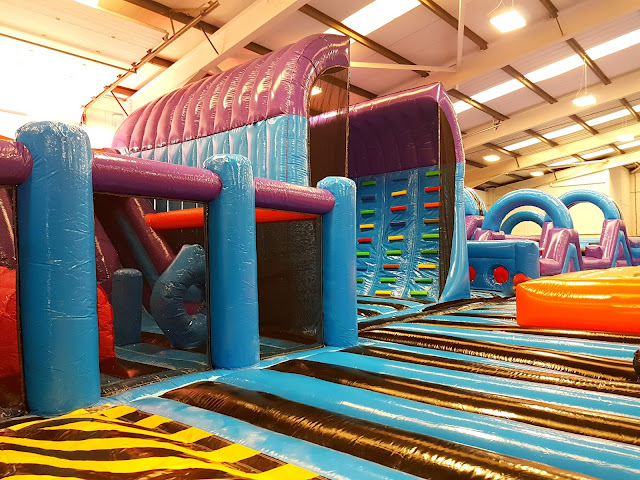 My daughter Emma really enjoyed the Inflata Wall, which is a giant multi-person inflatable climbing wall. She liked the fact that she didn't need to wear a harness and could climb both upwards, downwards and sideways to get around the whole wall.

Ben's favourite was the Inflata Challenge, which is where you harness yourself into a bungee and then race a competitor to the end. Once you reach the bottom though, you need to slam dunk a basketball into the hoop before the bungee pulls you back. Ben and his dad had a great time playing on this and it was so funny seeing them race and then flying backwards. 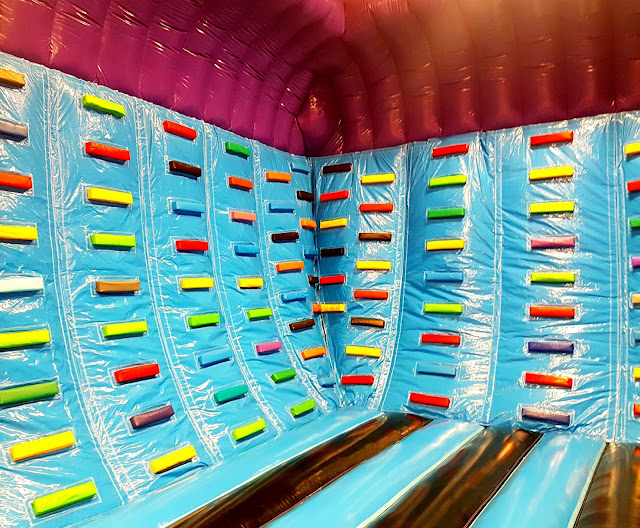 For children under four, there is also a separate inflatable play area which has its very own slide and ball pool on a smaller scale. There were also some bridges and tunnels to climb through and it was a lovely area for toddlers to enjoy. 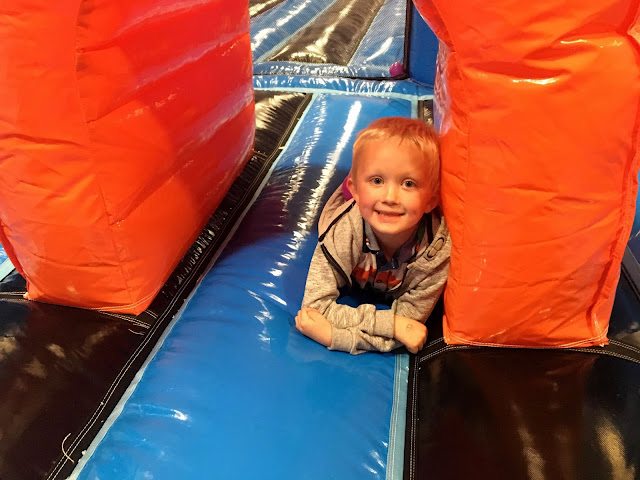 One aspect of the attraction that I was really impressed with was the staff. Everyone was so chatty and friendly and it was nice to be made to feel so welcome. The supervisors on the equipment worked hard to ensure that the safety rules were being followed, whilst still wearing a smile and also having a good laugh with the guests. On one occasion my youngest son climbed to the larger 5-person slide and then changed his mind once he got to the top. Without hesitation the young lady supervising went to the top of the slide and helped my little boy back down, whilst reassuring him the whole time that it was absolutely fine and there was no problem at all. This was a situation where my five year old could have easily become upset and worried, but instead he was instantly put at ease. Once he was safely back to the bottom he said thank you and happily continued to bounce around in a different direction. Little things like this really matter to a small child (and their parents) so I was very pleased with how well this small problem was handled. 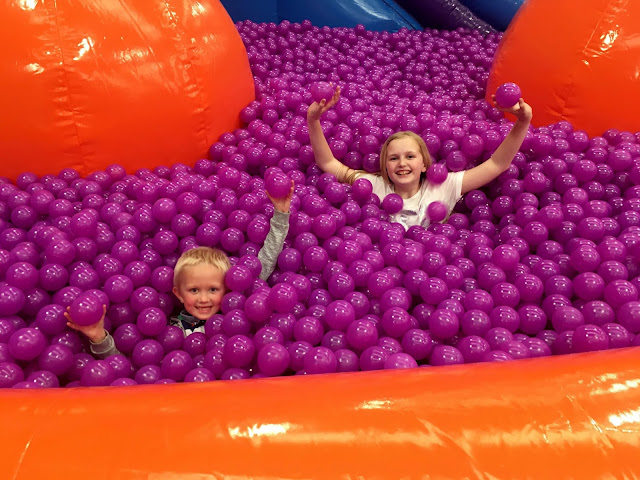 Whilst using the equipment we made use of the lockers which were available to store our shoes and valuables. These cost £1 which is refundable when you return the key to the locker. There were plenty available and we found this facility really useful to be able to keep our items safe.

Obviously all that bouncing can become very thirsty work, so I was pleased to see that there was a cafe on site selling a large range of both hot and cold drinks. In addition to this there was also a very nice menu offering a good choice of meals and snacks. I thought that the prices were reasonable and it was possible to create meal deals too, including a Family Hot Dog Meal Deal for only £12.50 which feeds a family of four. 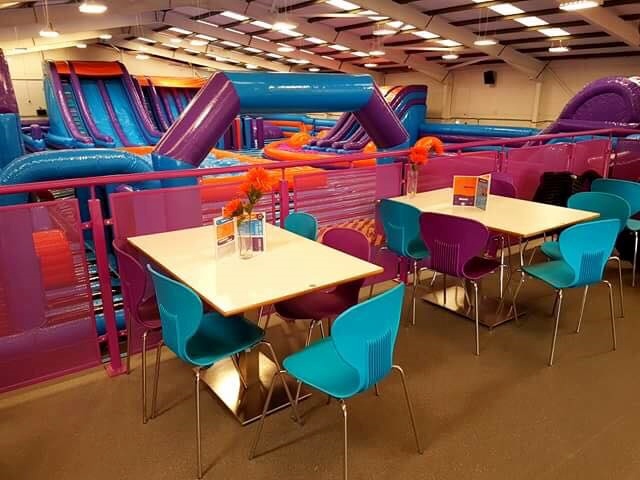 The cafe and dining area was very clean and tidy and we loved the purple, blue and orange colour scheme that featured throughout. The bright colours helped to create really vibrant surroundings and made it a nice place to relax and enjoy some food. The staff members working on the refreshment area seemed well organised and in addition to serving customers quickly, they were always checking for anywhere that needed cleaning and making sure the area stayed tidy and presentable. 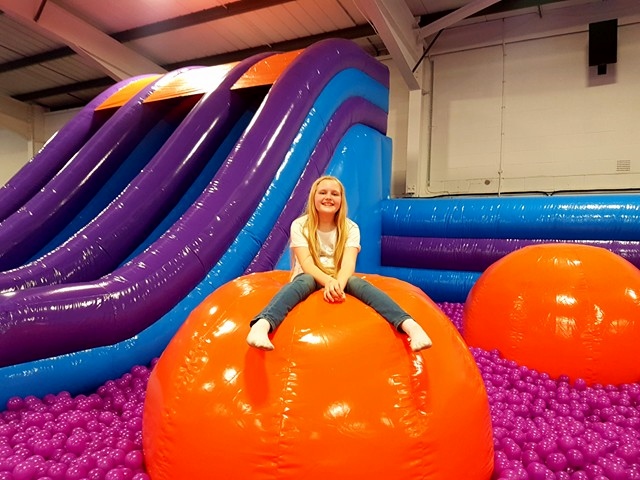 Overall we had an absolutely fantastic time at Inflata Nation Cheshire and it will certainly be a definite contender for my children's birthday parties, later in the year. Everything seemed well managed from the moment we arrived and all the staff worked tirelessly hard to ensure that all the guests had a great time. Inflata Nation is a wonderful idea and I am sure that many families will agree. There is plenty to do for all ages and the fact that adults can have just as much fun as the children, is just brilliant. I had been a little concerned that adults, teenagers and smaller children all playing on the same equipment at the same time could lead to some bumps or falls, but the presence of supervisors on the inflatable ensured that everyone kept to the rules and played safely. We will definitely be returning in the future and I look forward to seeing Inflata Nation expand to more centres during the next couple of years.

Attraction: Inflata Nation Cheshire
Address: Inflata Nation Inflatable Theme Park Cheshire, Elite House, Shaw Street, Runcorn, WA7 5TZ
Booking line: 0161 710 2360 - Lines open Monday to Thursday 9:30am til 7:30pm and Friday to Sunday 9:30am til 5:30pm.
Events Department: 0161 710 2360 (option 2) - Lines open Monday to Friday 9.30am til 5pm
Opening Times & Entry Prices: Times & prices vary so please visit the attractions own website in order to obtain the most up to date information. Their website and social media channels can be found below. 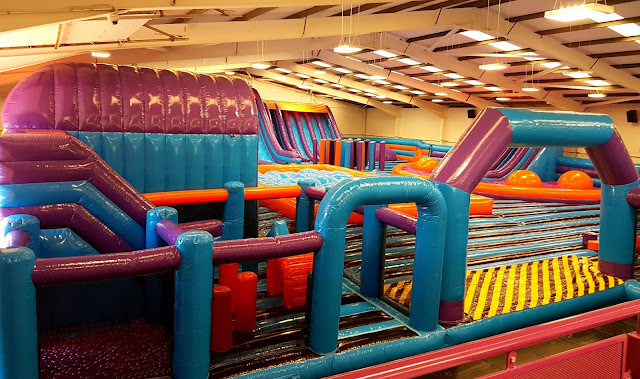 Disclaimer: We were invited as guests to the pre-launch party of Inflata Nation Cheshire. All opinions and photographs are my own unless stated otherwise.
Posted by It's A Family Adventure at 19:16