Well Disney on Ice certainly brought an amazing evening of magic and wonder to the Echo Arena last night, providing the most magnificent spectacle upon the ice. From the moment we arrived there was just an overwhelming feeling of happiness as children (and many adults too) beamed with excitement ready for the show to start. Everywhere we turned there was smiling, dancing and many children dressed up as their favourite Disney characters. This certainly set the scene for the rest of the night as the show began and we were all transported into the wonderful world of Disney. 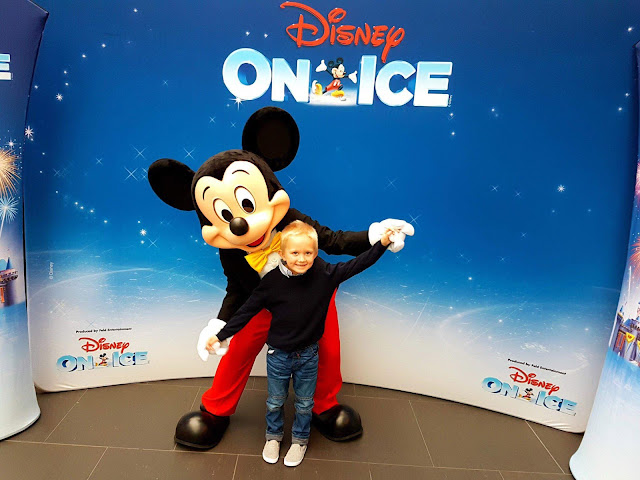 Disney on Ice presents Worlds of Enchantment features beloved characters from Disney Pixar's Cars, Toy Story 3, Disney's The Little Mermaid and the Academy Award® winning Frozen. It takes the audience on a magical adventure through storytelling, music, dance and of course ice skating that instantly brings a smile to your face.

Before the main show began, the audience were treated to a warm up routine with the Fit to Dance team, that helps to encourage children to get active and inspire them to get moving. We were all asked to get up on our feet and join in with some fitness and dance moves. Of course you don't have to do this if you don't want to and it is entirely optional, but the majority of the crowd seemed to love it and we saw so many children and adults join in with the fun.

Once the Fit to Dance introduction had finished, some very special and much loved characters entered the arena and we all waited in anticipation to see who would be next to skate out onto the ice. My son Riley was absolutely delighted to see Mickey Mouse along with his friends Minnie Mouse, Donald Duck and Goofy.

In typical Goofy style, he skated into the rink and tumbled into the end of the stage, much to the delight of the children who filled the arena with lots of laughter. They completed a short routine together and gave us a few little clues as to who would be performing next. My eldest son Ben quickly guessed that it was going to be the characters from Toy Story!

Sure enough, Andy took to the arena in a beautiful solo routine that had my children fascinated. Watching the story unfold on the ice was just magical and the moment that all the characters came out to the song of the "Toys Are Back In Town" the crowd began to sing and clap along with excitement. Before long we found ourselves at Sunnyside Day Care Centre where the toys had to try and plan their escape from both the centre and also the clutches of Lotso Huggin Bear.

My youngest son Riley hasn't actually seen Toy Story 3, so this was actually a whole new story for him and he sat absolutely captivated, as he followed the toys on their adventure to get home to Andy. Featuring amazing choreography, magnificent ice skating skills and the most perfect of costumes, it really was incredible. My eldest son Ben was a huge Toy Story fan when he was younger and so it also brought back lots of wonderful memories for him as he reminisced about how he always used to play with Buzz Lightyear and Slinky Dog (or Stinky Dog as he used to wrongly name him back then)! 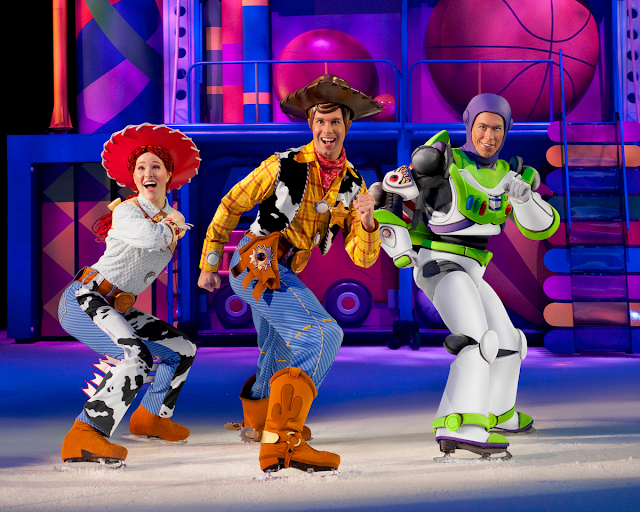 After another short introduction by Mickey and the gang, we ventured underwater where we met Ariel and her best friends Flounder and Sebastian. The Little Mermaid was one of my favourite Disney films as a child and I was also lucky enough to see the Broadway musical version a few years ago whilst in New York, so I couldn't wait to see how it would be portrayed on the ice. It was everything I had hoped it would be and more, with the most beautiful ice dancing, creative costumes and vibrant scenery. Featuring popular songs such as Under the Sea, Part of your World and Kiss the Girl it was breathtaking and one of my many favourite moments of the night.

This led to an interval, which gave us the perfect opportunity to stock up on ice cream for the second part of the show. These were priced at £2.50 a tub which I thought was very reasonable compared to other venues we have visited before. There were plenty of other drinks and snacks available and we also saw other guests with some really fun looking slushies in an Olaf themed cup which looked fabulous! 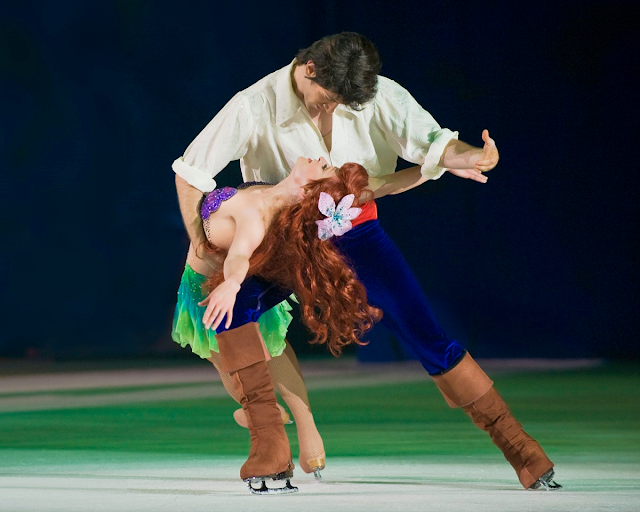 After the interval, the lights began to dim and Mickey Mouse, Minnie Mouse, Donald Duck and Goofy entered the rink in their lovely little red car. Unfortunately they began to experience engine trouble, which meant that they needed to call for some help from their friends. This led to Mater, Lightning McQueen and the rest of the cars crew, taking to the rink and performing some incredible high-speed stunts across the ice.

Riley was absolutely mesmerised by the cars and we all wondered how they were being controlled. The routine was performed to perfection with the cars weaving in and out of one another with accurate timing, so we weren't sure whether they were remote controlled or had skaters/drivers inside them. Either way it was absolutely wonderful to see them on the ice, as well as being a really innovative and creative idea too. With horns honking, lights flashing and a lot of team work, Mickey's car was soon up and running again much to the delight of the audience. 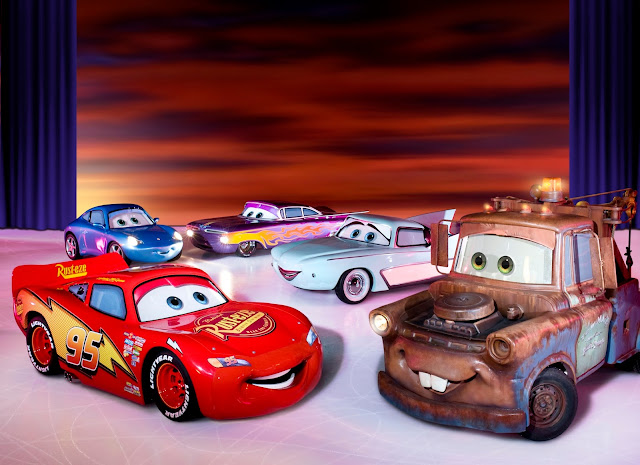 The last part of the show brought the moment that everyone had been waiting for, as we entered the wintery world of Arendelle with sisters Anna and Elsa from the BAFTA and Academy Award® winning, number one animated feature film of all time, Disney's Frozen.

We joined Anna on her journey to find her sister Elsa and met the loveable snowman Olaf and mountain-man Kristoff along the way. Olaf certainly provided plenty of laughs and was a definite hit with the crowd. It was also an audience sing-a-long extravaganza with performances to Love Is An Open Door, For the First Time in Forever, In Summer and of course Let it Go.

Elsa's performance of 'Let it Go' was an icy spectacular and there was something so special and breathtaking about an audience of thousands all singing along to the song. A small crowd of children also began to gather close to the stage and it was so heartwarming to see such happiness on peoples faces as they danced along to the music. A truly accurate representation of the Disney magic and how it can make everyone feel so carefree and content. 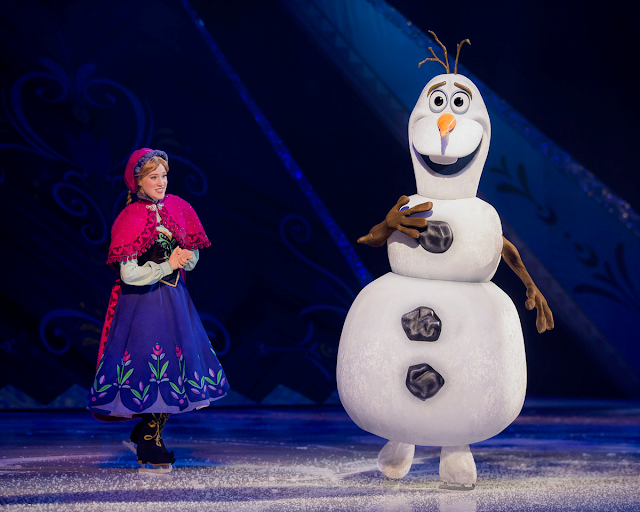 Overall, we had an absolutely incredible time at Disney on Ice presents Worlds of Enchantment, in the Liverpool Echo Arena last night. It really was something truly special and both my husband and I enjoyed it just as much as the children. One of my favourite things about the whole show is the completely relaxed atmosphere, as you can sing along, get up and dance and you certainly don't need to worry about your children being a little noisy during the show or sitting still. Disney on Ice want this to be a memorable experience for the whole family and it most definitely is!

For the complete list of tour dates, please visit www.disneyonice.co.uk

You can also keep up to date with the latest developments on social media by visiting the following channels: 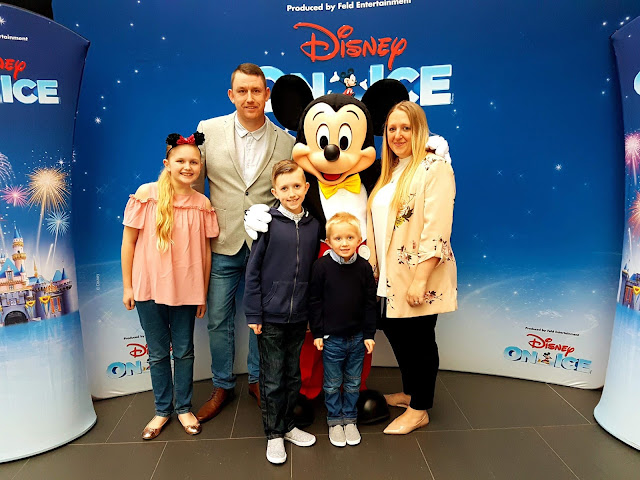 Disclaimer: We were provided with complimentary tickets for the purpose of providing an honest review of the show. All opinions are my own unless otherwise stated.
Posted by It's A Family Adventure at 13:53