ComedySportz are celebrating 10 years of competitive comedy shenanigans at the Waterside Arts Centre this month. The group, now in their 16th year, have performed regular monthly shows and are the longest running family friendly improv troupe in the North West.

For those who are yet to catch a ComedySportz show, each 'match' sees two teams go for gold with fully improvised gags, games, sketches and songs inspired by audience suggestions. It's a completely unpredictable night of good humoured fun that the whole family can enjoy, with a referee on hand to keep things moving and ensure a good clean game. 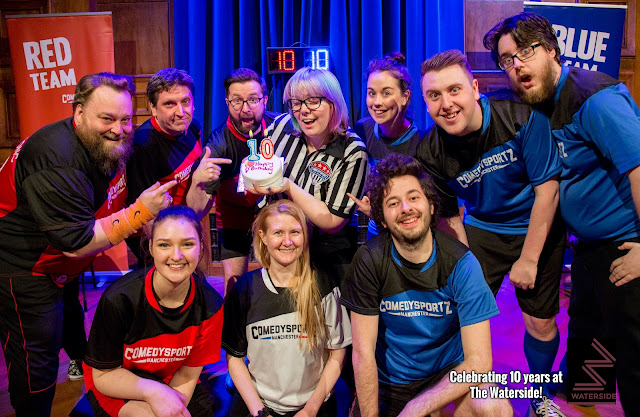 The group have now proved so popular at Sale that they've launched two brand new shows there in the last year. The first, ComedySportz 4 Tots is an hour long show that promises plenty of big laughs for little kids, with a silly story, songs and games as well as plenty of interactivity for young ones. The show has proven to be very popular, introducing kids under 6 to comedy and performance. The group then launched their improvised Pantomime in December 2017 which proved yet again to be incredibly popular. "We've earned the audience's trust to try new shows and formats and we're delighted that they've come along with us," says ComedySportz Manchester founder and performer Brainne Edge.

"We've performed shows across the UK and are regular faces at the Edinburgh Fringe. Last year we performed for Prince Edward and his family so we're not just a family friendly comedy show - we're a Royal Family Friendly comedy show!" adds Brainne. "The Waterside has been our home now for 10 years and the audience's are just fabulous with brilliant suggestions and audience volunteers."

"It's a great night and that rare family show that the whole family can enjoy" added ComedySportz player Sean Mason. "No two shows are ever the same and as we never know what suggestions the audience have in store for us, the only thing we know is going to happen is that everyone is going to have a great night out!"

To celebrate 10 years at Waterside, the group have also launched a competition asking fans under 16 years old to design their next flyer. Information on how to enter can be found on the ComedySportz website and the winner will receive a framed copy of their design, along with 4 tickets for a future show and a selection of ComedySportz merchandise. The deadline for entries is 5th May 2018 and further information can be found here: www.comedysportz.co.uk/10-years-at-waterside/

Tickets can be purchased online at www.watersidearts.org or via the Waterside box office on 0161 912 5616.

You can find out more about ComedySportz shows and workshops at www.comedysportz.co.uk or visit their social media channels which are:

*Disclaimer: Details provided are correct at the time of writing, but would always recommend visiting the companies own website, in order to obtain the most up to date information.