A Trip to Madame Tussauds in Blackpool - A Review

Whilst my family and I were recently in Blackpool, we were delighted to have the opportunity to visit the world famous Madame Tussauds, which is situated along the main promenade. We couldn't wait to visit the star studded attraction and get up close to some of our favourite celebrities and sports stars in their wax figure form and see just how life like they were. We had also been informed that the attraction had recently invested £1million pounds in a brand new Marvel Super Heroes area, which would allow us to come face to face with some iconic comic book legends.

The attraction itself is really easy to find and it would be very hard to miss it, whilst travelling down the promenade. There is ample parking nearby and we chose to park in the Central Car Park which cost us £5.50 for 4 hours. It is easily accessible by public transport as well, with tram and bus stops in the vicinity.

There was a small queue to enter the attraction, but this moved very quickly and the lady on the front desk was very kind and helpful in assisting us on arrival. The photo opportunities began before we had even entered the main attraction, with this fantastic ET wax figure being located at the entrance. My daughter could not resist climbing aboard the bike and it got all the children excited thinking about what other figures and characters would be inside. 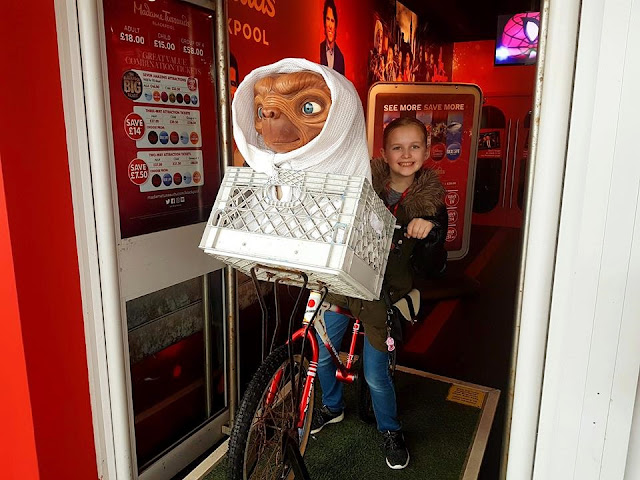 Our Madame Tussauds adventure began with some well known television stars and my children took their place upon Simon Cowells couch and pretended that they were about to be told if they had made it to the X-Factor Live Finals. Riley was still a little too young to recognise any of the famous faces in this area, but Ben and Emma knew them all and moved around excitedly, patiently waiting to have their photo taken with each wax figure. My husband and I both thought that Keith Lemon was brilliant and looked really accurate. I also liked the fact that each figure had is own kind of area, background or props which made it more interesting and much more fun for family photographs. 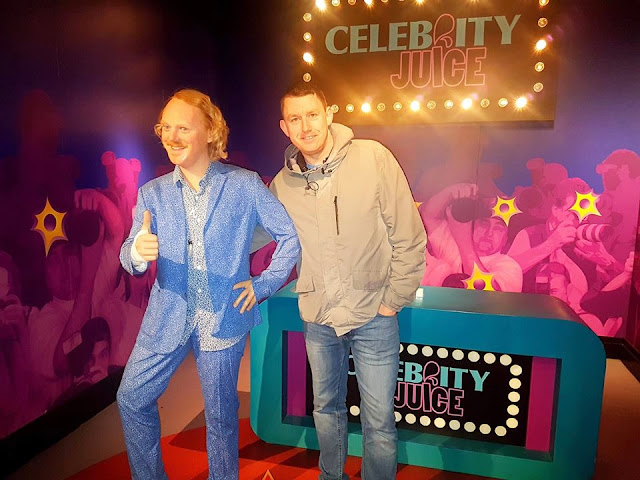 This wax figure of Phil "The Power" Taylor was so lifelike and even on the photograph below it looks as if my son Ben is standing next to the man himself.  I was fascinated at how they are made and just how much detail is applied, it really was incredible. 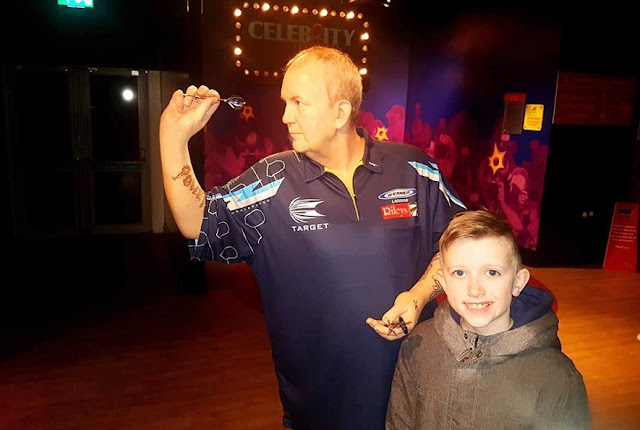 Being a big fan of the outdoors, Ben was delighted to have the chance to have his photograph taken with the adventurer Bear Grylls. I loved the fact that the majority of wax figures had scenery to help you take the perfect photo and this exhibit was no exception. Featuring a specially created rock formation, it was the ideal place to grab a picture with this intrepid explorer. 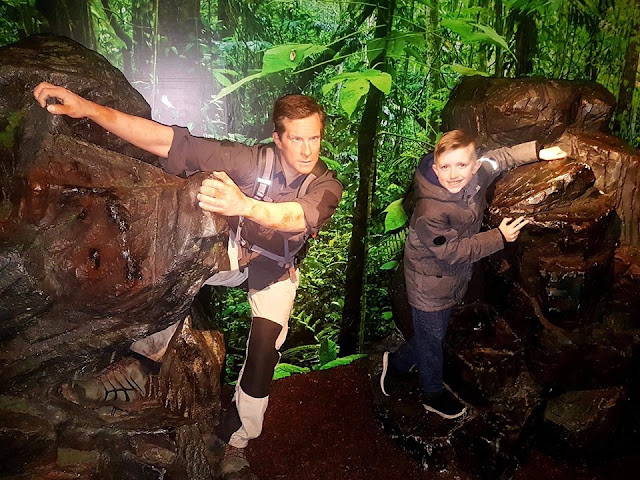 My daughter Emma absolutely loved the I'm A Celebrity Get Me Out of Here area which provided photo opportunities in abundance. You could re-create the winners walk across the rope bridge, become the King or Queen of the Jungle by sitting on the oversized throne, or try your hand at some of the bushtucker trials whilst taking a selfie. 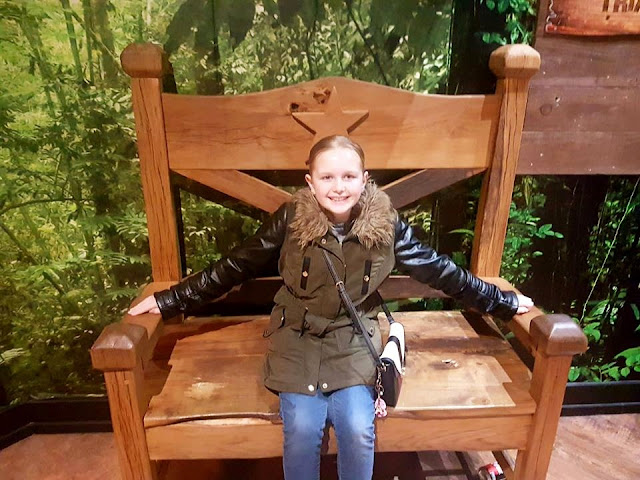 The Sporting Heroes Academy was my favourite part of the attraction, as it had plenty of hands-on and interactive elements to enjoy. World famous sports stars in this zone included wax figures such as Lewis Hamilton, Mo Farah & Conor McGregor. My family and I are big Formula One fans and so it was great to grab a picture with the Formula 1 World Champion, as well as test our reaction speed on the Batak machine. 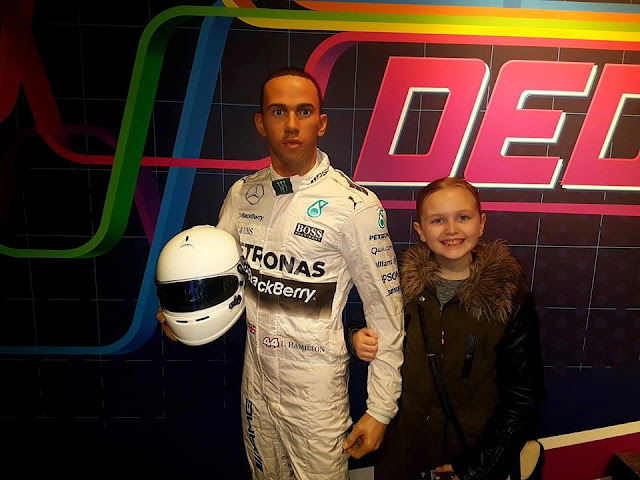 The Conor McGregor wax figure is relatively new to the collection, having been unveiled back in February. It is the world's first wax figure of the 'Notorious' professional fighter and he was certainly popular with attraction visitors as we joined a short queue to take a photo. I was interested to learn more about how he was created and just how much of an in-depth process it is to create a sculpture with such an accurate likeness. I had never thought too much about the making of the wax figures before, but I learnt that it actually takes expert teams of sculptors, moulders, colourists and hair stylists to work together and create the final masterpiece. This includes analysing hundreds of photos to ensure that no details are missed. 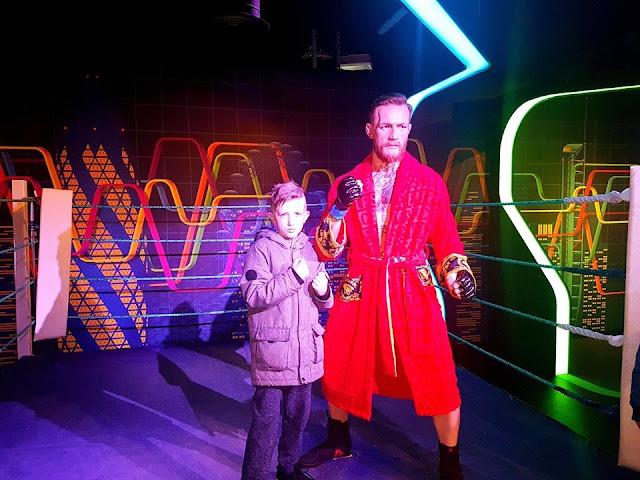 The academy area was a really inviting and colourful place and there was something fun to do for all ages. My children spotted a climbing wall game where you have to climb and reach some bats that fly onto the wall before the time runs out. You can play by yourself or with a partner and try to achieve the highest score. There was a queue for this due to its popularity, but the game and idea is absolutely brilliant and my children really enjoyed it. A seating area and drinks machine are located just opposite, so it is also the ideal opportunity to have a sit down and enjoy some refreshments whilst you wait. 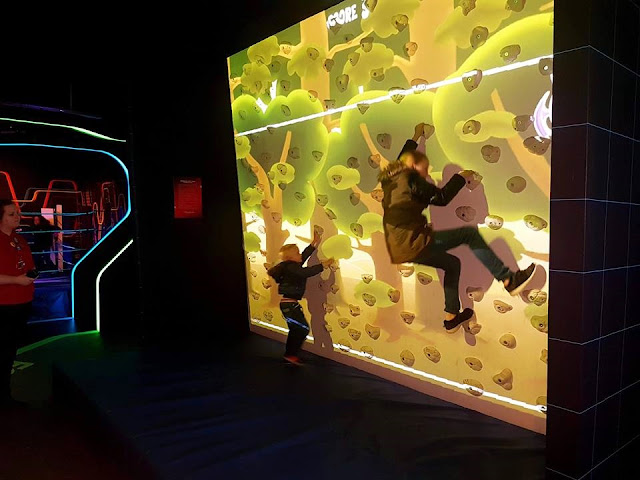 Once we had tried all of the activities on offer in the Sporting Heroes Academy, it was time for us to check out the amazing new Marvel Super Heroes area, which has filled 5501 square feet of previously undeveloped space. It was wonderful to have the opportunity to come face to face with comic book and film heroes set amongst incredible artwork and scenery. My children all loved The Hulk and situated next to this wax figure was an interactive activity, that allows you to put your strength to the test and lift up a yellow taxi. Just make sure you don't make The Hulk angry! 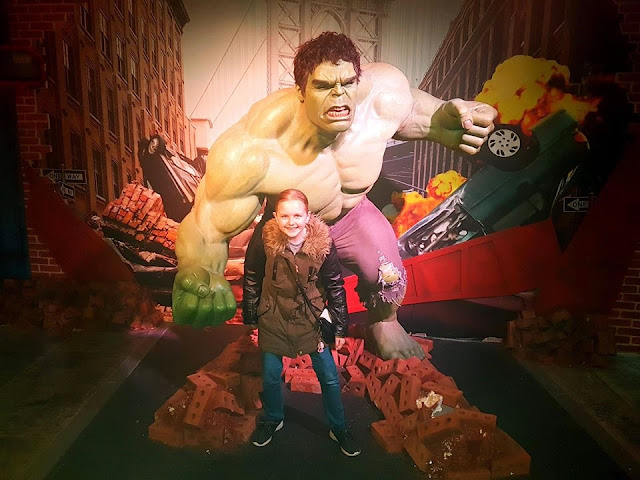 The new area has taken inspiration from both the Marvel comics and the blockbuster films, which has allowed Madame Tussauds to create a fantastic must-visit destination for Marvel fans. It has been separated into four zones which begins with you walking through a vintage comic book store that provides an inviting walkway into the world of Marvel Super Heroes. Next we entered an ice cave, where we came across the Asguardian God of Thunder - Thor. 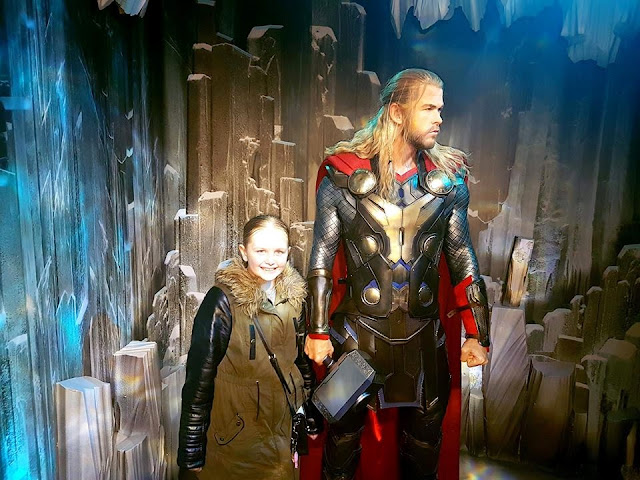 We then came across Colonel Nicholas Joseph Fury, who is a fictional character that appeared in American comic books. Again this wax figure was so incredibly life-like that we found it hard to believe that it wasn't a real person. 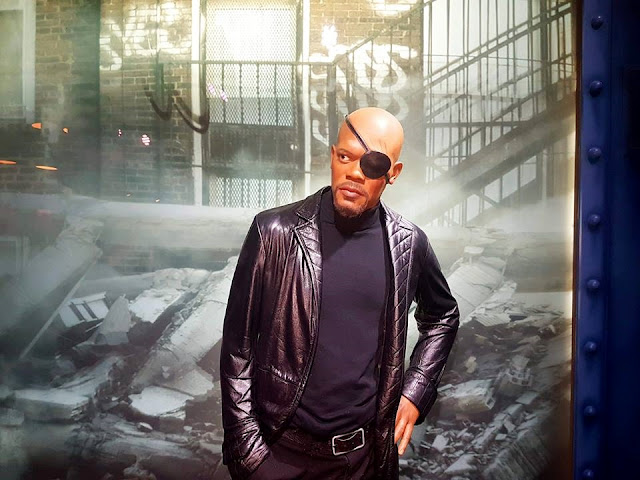 Our next stop was a visit to see Spiderman, where you could pay for a photo posing against the skyscraper background. There were several of these photo opportunities located around the attraction where you could have a professional photo taken that is then added onto a photo card. These photos can then be viewed and purchased at the end of the attraction by handing your photo card in, which will bring up all the images . These photos are optional and you are under no obligation to purchase them if you do have them taken. We politely declined and opted to take our own pictures instead. The Guardians of the Galaxy area also provided a further photo opportunity with the marvellous 10ft Groot! 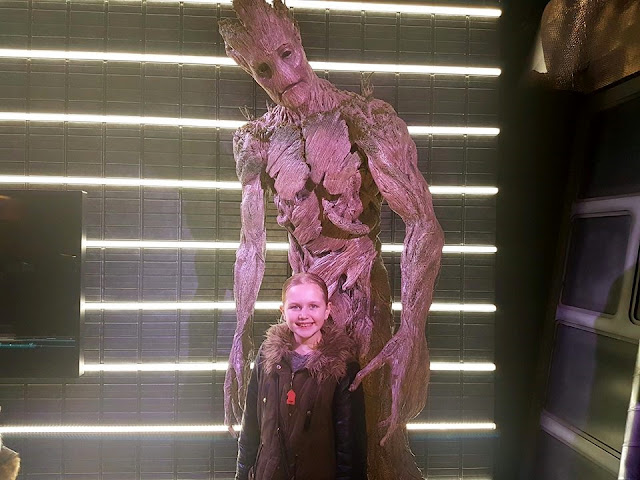 Every time we thought that we had reached the end of the attraction, there would be another area for us to enjoy and we were all genuinely suprised by how large Madame Tussauds Blackpool is. As we continued our way around, we stumbled upon the cobbles of Coronation Street and enjoyed a well deserved rest in the Rovers Return with some popular pub regulars. It is a fully licensed bar, so you can purchase both non-alcoholic and alcoholic drinks. The pub was very busy but we spotted both Ken Barlow and Michelle Connor inside. 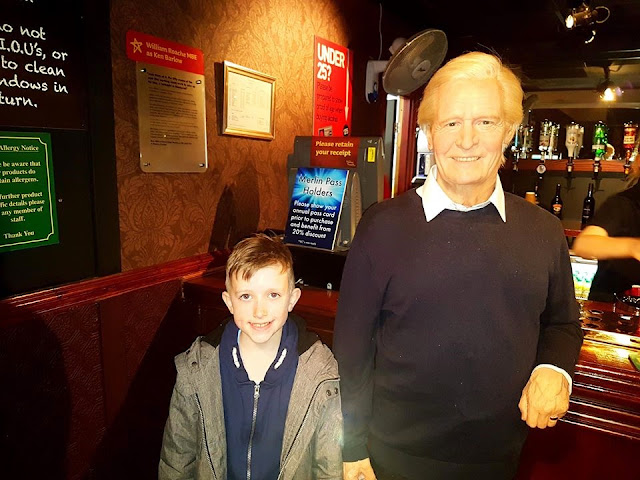 After a trip to the Rovers Return, we came across some very important wax figures, in the form of royalty. We thought that the Queen was absolutely amazing and the Duchess of Cambridge looked magnificent in her sparkling gown. The dress is actually an exact copy of the stunning Jenny Packham dress she wore for the ARK charity dinner and it looks incredible. My daughter Emma really enjoyed posing for photos with some well known music stars, in particular Olly Murs. There is a really fascinating photograph on the Madame Tussauds website here, which shows Olly's face as a before and after, whilst being transformed into a wax figure. Every single fine detail down to the beard was meticulously placed. 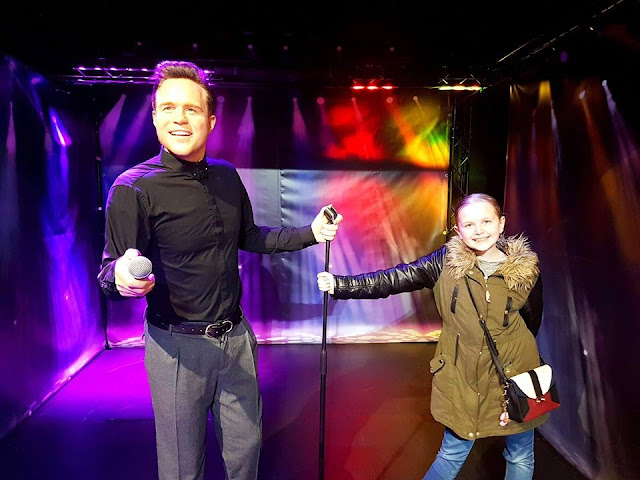 My youngest son Riley is a big fan of Ed Sheeran's songs, so this wax figure was one that he instantly recognised. When I asked him what he thought of the attraction so far, he gave it two very big thumbs up! 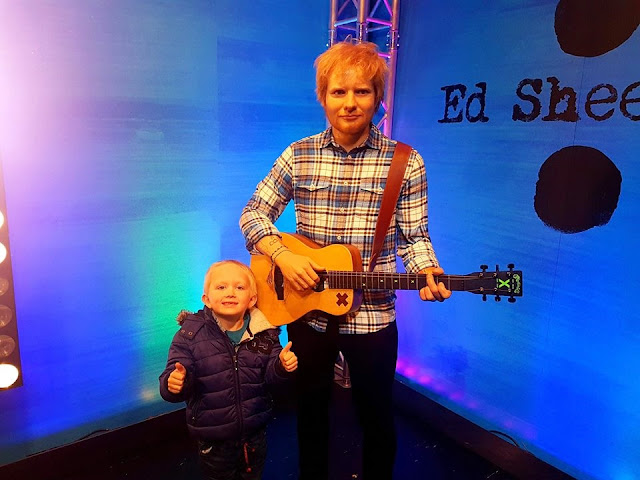 Overall we had a wonderful time at Madame Tussauds and were very surprised by how large the attraction actually was. I had wrongly assumed that we would be in and out in under an hour, but with so many photo opportunities and interactive activities to choose from, there was certainly plenty to do. Before we knew it, we had already been there for over three hours! The attraction was busy, but there was plenty of space between exhibits so this meant that there was no overcrowding. Visitors with pushchairs, or guests in wheelchairs could also get around the site safely and with ease.

I had initially thought that the entry price was quite high, but after visiting and seeing just how much is on offer, I actually think it is a very fair price for something that is unique and lots of fun. You can also save money by purchasing combination tickets that allow you to visit other attractions in the area such as the Blackpool Tower and The Blackpool Dungeon, so it is worth considering these if you are planning on visiting the area for a few days.

We would definitely return to Madame Tussauds Blackpool and I look forward to seeing what other celebrities are added to their huge wax figure collection in the future. It has been so hard to choose only a select few photos out of the hundreds that were taken, so I shall also add a slideshow of all our images in the next couple of days, so be sure to check back to this blog post soon! 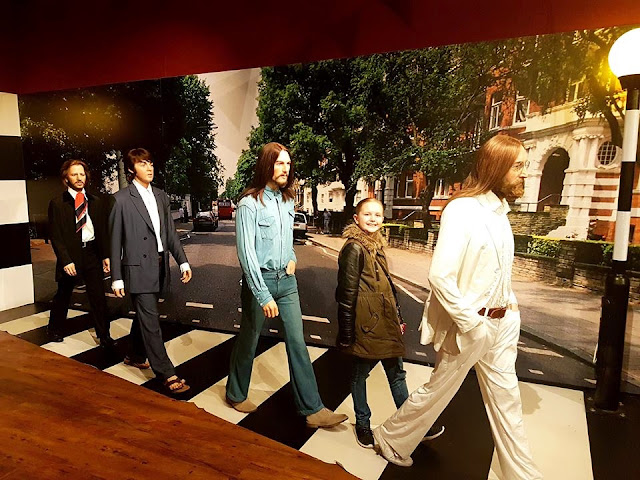 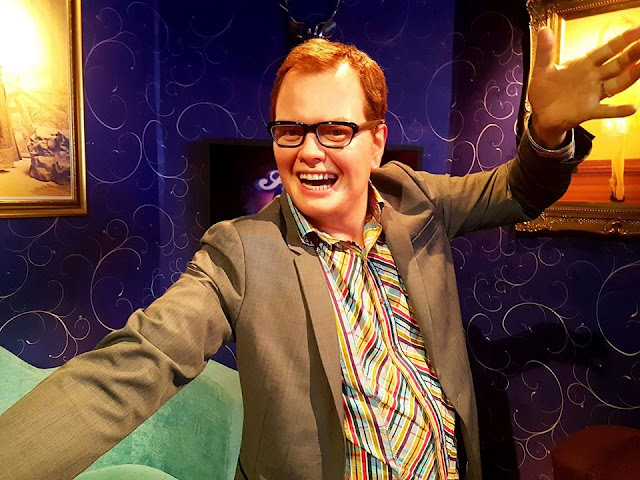 Disclaimer: We were provided with complimentary admission for the purpose of writing an honest review of our experience. All thoughts, opinions and photographs are our own unless stated otherwise.