Children's Touring Partnership and Royal & Derngate, Northampton are delighted to bring their new adaptation of Rudyard Kipling's family classic The Jungle Book to The Lowry from Tuesday 2nd to Sunday 6th May.

Originally written in 1894, Kipling's beloved tale will be re-imagined with a brand new score and script, exploring the universal themes of family, belonging and identity.

The Jungle Book tells of Mowgli the man cub who battles for survival in this heart-warming coming-of-age story about a boy raised by wolves in the jungle. With the help of his animal friends, including Bagheera the panther, Balloo the Bear and Kaa the python, Mowgli outwits the cruel and powerful tiger, Shere Khan, and learns the law of the jungle.

Cast includes Rachel Dawson as 'Kaa Grey', Lloyd Gorman as 'Shere Khan', TJ Holmes as 'Hiran', Avita Jay as 'Raksha', Keziah Joseph as 'Mowgli' Dyfrig Morris as 'Balloo', Deborah Oyelade as 'Bagheera' and Tripti Tripuraneni as 'Akala'. They are joined by Ruri James and Chipo Kureya in the ensemble. 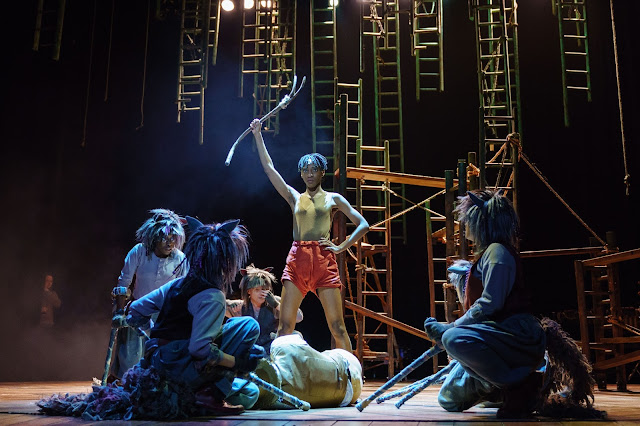 Max Webster directed Dr Seuss' "The Lorax" at the Old Vic, which was nominated for Best Entertainment and Family Show at the 2016 Olivier Awards.

Jessica Swale, writer, said "I jumped at the chance to adapt The Jungle Book because it's such a vivid world - yet, for a writer, there's so much opportunity to imagine the jungle afresh. Part of the book's enduring appeal is that the jungle can be anything we choose. It's a playground, a school, a hideaway, an adventure, so I've enjoyed exploring what sort of place this mysterious, delightful, sometimes scary place might be - and what better way to do that than with Max Webster, one of the most inventive and imaginative directors working today."

"I loved the characters as Kipling wrote them, but wanted to find new voices which resonate now - funny, bright, dynamic voices, with a little more wit, and greater diversity, in terms of place, tone, gender and culture. It's a funny, heart-filled roller coaster of a journey which, I hope, will transport the audience right round the world and back again."

Director, Max Webster, said "The Jungle Book was an instant classic when it was written over a hundred years ago with its story of Mowgli finding his path through the jungle. Each generation has re-imagined this story as their own, and now Jess Swale brings it right up to date in a hilarious and action-packed version for the twenty first century. With wonderful songs by the jazz legend Joe Stilgoe, and packed with adventure, humour and magic this classic tale will tickle the tales of all the family. I am delighted to be working alongside Jessica, Joe, Children's Touring Partnership and Royal and Derngate to bring this vivid adaptation to the stage".

The show is recommended as being suitable for ages 6+.

Running time - 2 hours 15 minutes including interval
Posted by It's A Family Adventure at 19:49