For the last few weeks we have been bringing you some toy reviews and recommendations. A lot of these have been aimed at the younger market, but we were very excited to recently be given the opportunity to review the Nikko RC Pyscho Gyro Vehicle, which is recommended for children aged 8+.

My son Ben has always loved anything remote control and has built up a collection of supercar remote control vehicles over the last few years. We were therefore intrigued to see just what the Nikko RC Pyscho Gyro Vehicle could offer in terms of fun, speed and stunts. Could it keep my 9 year old son entertained? Well we couldn't wait to find out! 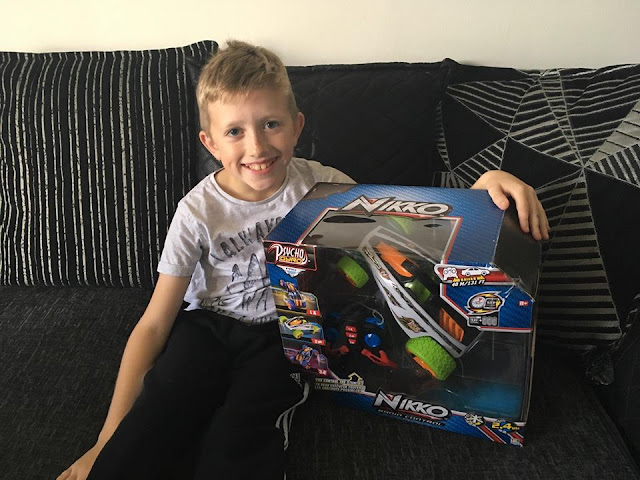 When the product arrived it came in a large box, with a clear plastic front. This meant that you could completely see both the vehicle and the controller inside the box. I always prefer it when companies do this, so that you have a clear understanding of exactly what the product looks like and how big it is. It looked very impressive and immediately generated a loud "WOW" from Ben. The box displays that there is a 40m range, as well as providing some images of the product in use. It also shows what batteries are required and that there is a fast 1 hour charging time. 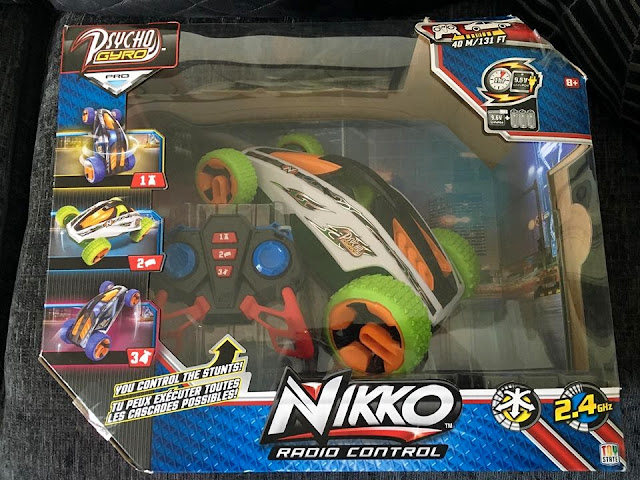 The reverse of the box provides some large pictures of the vehicle in different positions, as well as a very clear picture of the controller. There is also some links provided to watch some stunts on YouTube, as well as the Nikko website address www.nikkorc.com, where there is further information on the product available. 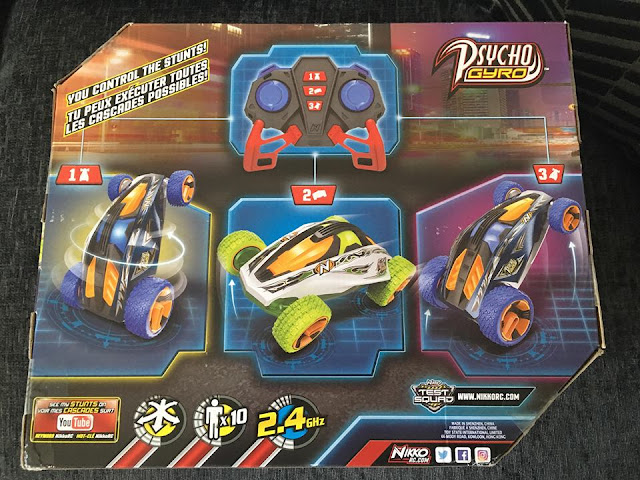 Ben couldn't wait to get the box open, but we explained that we would need to put it on charge for a while first, before he could use it. This resulted in Ben eagerly waiting in the kitchen whilst it charged for an hour, asking every five minutes whether it was ready yet. Once it was fully charged, Ben immediately took it into the living room to try it out and get used to the controls. It didn't take him long to get the hang of it and he found the vehicle very easy to manoeuvre.

The Nikko Pyscho Gyro is capable of some fantastic feats. It's gyro stunt technology allows users to spin their cars around on two wheels. Amazingly it is also possible to spin on only one wheel! The vehicle has high grip tyres which allow for high performance traction both indoor and outdoors. This has enabled my son to be able to play with the toy both on the carpet, as well as on the decking and concrete outside without any issue.

Before long, he had realised how easy it was to get it to spin on two wheels and so we were treated to the sound of it spinning on the kitchen floor until the battery ran out, which took quite a while. It had certainly grasped Ben's attention and was keeping him well entertained. He managed to drive it all the way to school the following day. I explained that we were going on holiday the following week and that there would be plenty of places to try the product out there, so he was excited to take the toy away with us too.

As expected there was plenty of outdoor space to play with it and put it to the test. We were staying on a lodge park which had very quiet roads and long concrete areas, which meant that the vehicle could travel smoothly and that we were able to test the distance it could travel accurately. 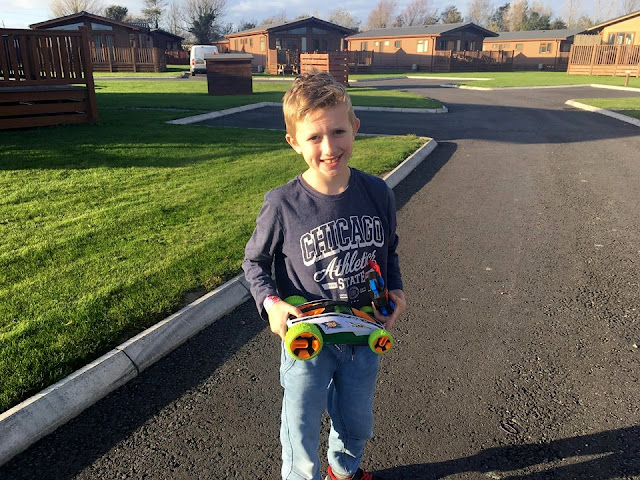 Ben loved the fact that the vehicle could rotate at speed on both one wheel and two wheels. We found this to be really clever, as each time we thought the vehicle would flip over, but bizarrely it was able to spin around and balance on one wheel without any problem. Here you can see a clip of the Nikko RC Pyscho Gyro Vehicle in Slow Motion:


The vehicle is approximately 27cm in length, which is a great size to be able to carry or store away with ease. As mentioned previously, we took ours away on holiday with us and it fitted in the suitcase, amongst all our other things, with ease.

If I was to change one element of the Nikko RC Psycho Gyro Vehicle, it would be the battery casing on the underneath of the toy. It requires a small screwdriver each time you need to remove the battery and it is also quite a compact fit getting it back in once charged. It is definitely something best handled by an adult as think it would be far too tricky for smaller hands. A clip release battery cover would have been much better.

Overall, we have been really impressed with the toy. It seems very durable and is built from good quality materials. Ben drove it into several kerbs whilst getting the hang of the controls and it has had numerous bumps into walls and other items, but there has been no damage to it, nor are there any visible marks, which is a good sign of a well built product. My son loves being able to control the stunts and the one wheel spin is his favourite. Accompanied with a cool and trendy design in a choice of two colours, this toy certainly looks the part and at an RRP of £59.99 it offers great value for money.

For more information on the Nikko RC Psycho Gyro Vehicle or other products in the Toy State range, you can visit the Toy State website here - Toy State

This product is available to purchase from Argos, Debenhams, Menkind, Hamley's, Smyths & Amazon. 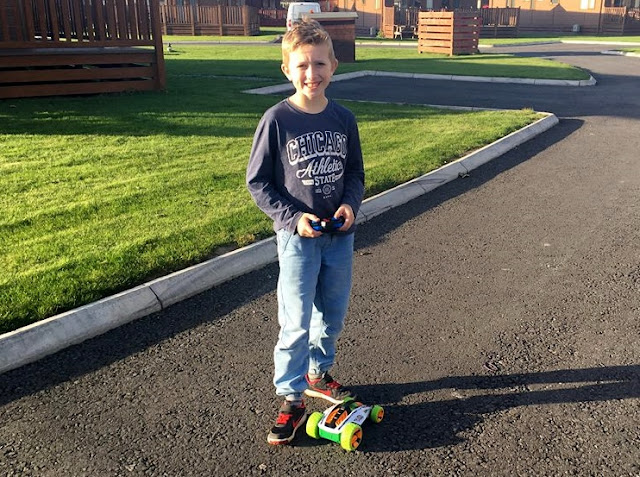 Disclaimer: We were provided with this product on a complimentary basis, for the purpose of providing an honest review of the product. This post contains an affiliate link. Opinions, photographs and videos are my own, unless stated otherwise.