Family Fun with Fuzzy-Felt by John Adams - A Review

We all have toys that we fondly remember playing with as a child and I am no exception. When I was in primary school, I used to have a childminder that would pick me up from school every day and I would go and play at her house for an hour until my mum came to collect me. My childminder had a great range of toys for us to play with, but I always remember getting the same toy out of the cupboard each day and would sit on the carpet happily playing til home time. That particular toy was Fuzzy-Felt. 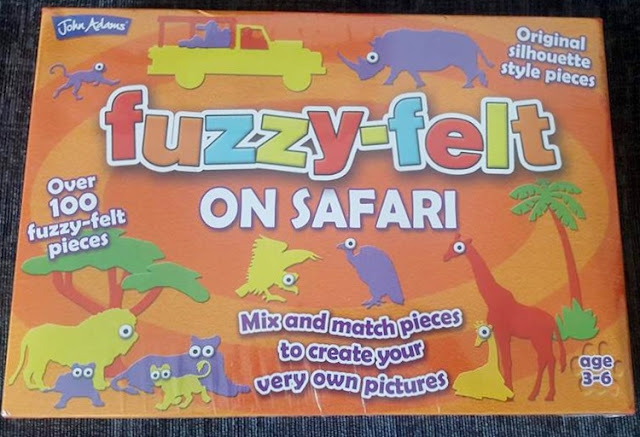 My childminder had a few different sets, but I always remember my favourites being the house and farm sets. I used to love arranging all the animals on the green background and making farm scenes that would tell a story in my own mind. I was never really brilliant at drawing or art in school and so this was a way I could be creative without needing any certain skills. I could create what I considered at the time to be masterpieces by simply arranging the felt to create a beautiful picture.

This memories were brought to the forefront of my mind recently when the Royal Mail brought out a series of stamps that celebrated children's toys from the past 100 years. Clearly I was not the only one to have loved Fuzzy-Felt, as the Fuzzy-Felt farm set features on one of the new stamps. The stamps recognise the most iconic toys of the last century and so it was of course, only right, that Fuzzy-Felt be included in the collection.

Fuzzy-Felt also has quite an interesting history, in how it actually came to be created and produced as a best selling toy. During the second world war, tank gaskets were made from felt and whilst being manufactured, small pieces of off-cuts would be left over. These 'left overs' then became popular with the children of the factory workers, who would play with the felt. This then led to the creation of Fuzzy-Felt by Lois Allan in 1950.

The toy manufacturer John Adams, now produces a fantastic range of Fuzzy-Felt sets which include the following:


You can view the full range on the John Adams site here: Fuzzy-Felt Range

Being such a fan of Fuzzy-Felt from my earlier years, I was delighted to be sent the Fuzzy-Felt On Safari play set for Riley to test out, enjoy and review. This was something completely new to him and he hasn't come across it in school either, so he was firstly intrigued as to what was involved. 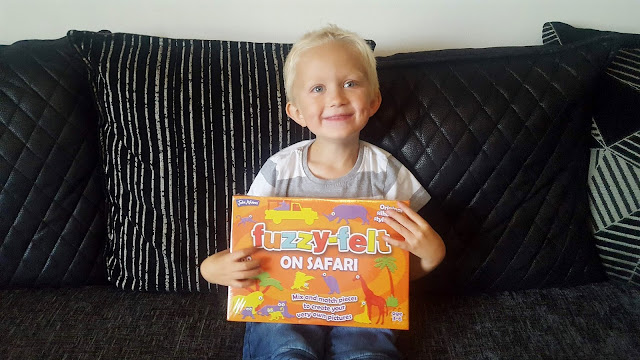 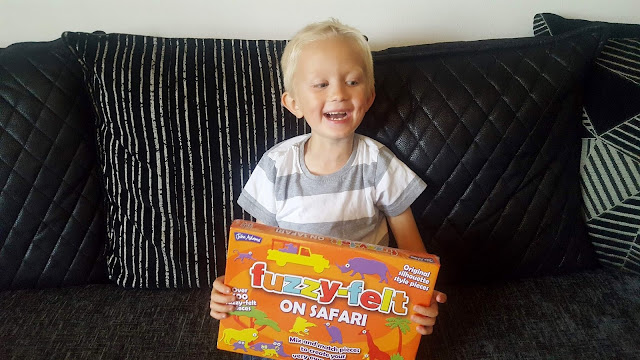 The front of the box immediately caught Riley's attention due to the bright orange background and the images of safari animals and vehicles that were displayed. The contents on the reverse of the box listed that there were over 100 assorted felt shapes inside, so I knew that it would definitely keep us busy for a while. The reverse of the box also lists how Fuzzy Felt can encourage co-ordination, recognition, counting, sorting and story telling, which are all big plus points to aid a childs development. 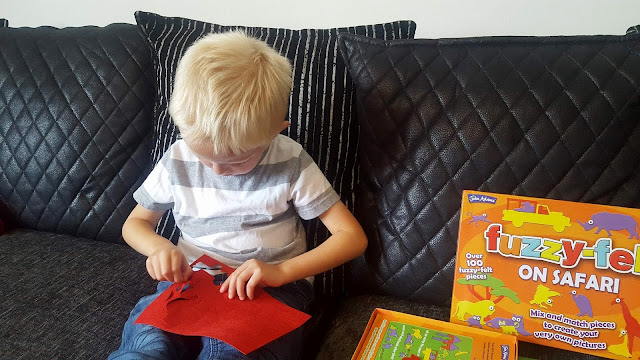 Inside the box was a green felt board along with several sheets of coloured felt. The sheets had numerous animals, scenery, vehicles and trees imprinted into them and so the first task was to push all the individual pieces of felt out. This kept Riley busy for a good fifteen minutes doing the larger pieces and I helped out with the smaller more tricky ones. 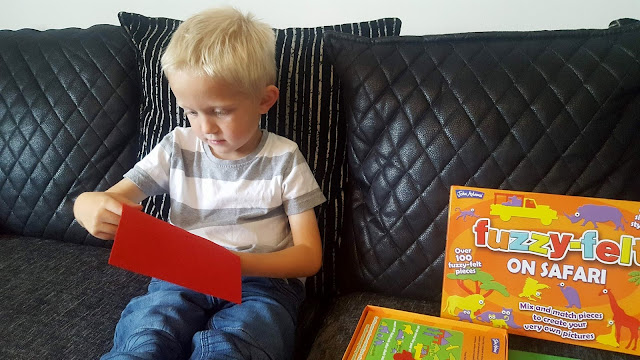 Once we had our collection of Fuzzy-Felt pieces ready, it was time to begin creating our picture. At this point Emma asked if she could help Riley, so I happily let her step in and they worked together nicely, in creating a lovely safari themed landscape. The beauty of Fuzzy-Felt is just how easy it is to do. There are no specific skill sets required and it is just a nice calm activity to do on your own, or together with others. Riley can get a little frustrated if something gets a bit tricky and he can't do something the first time he tries, but with Fuzzy-Felt, there was no chance of him having any difficulties at all. 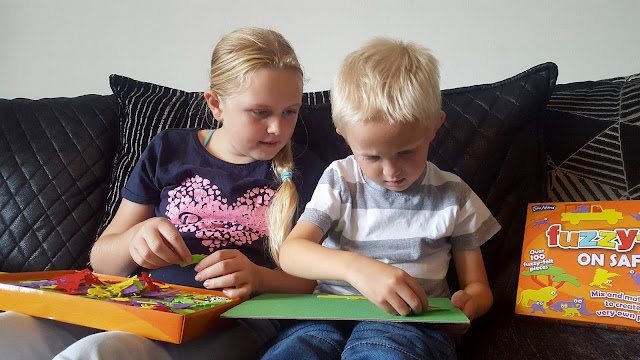 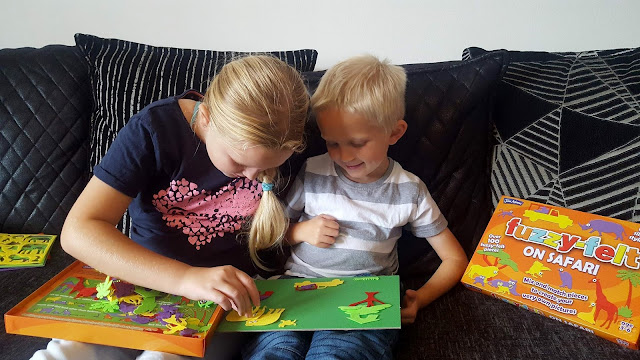 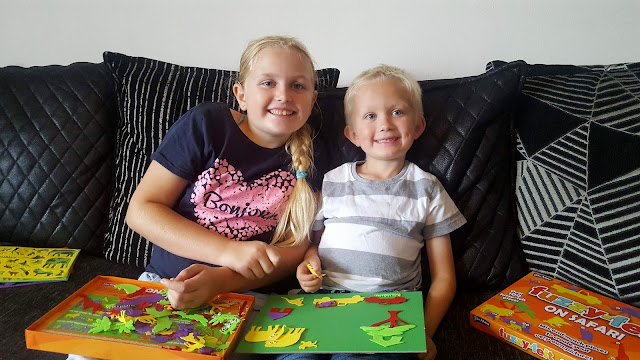 Riley couldn't stop grinning once his picture was complete and was extremely proud of his efforts. Emma created a story for him based on his creation and they sat together for ages just creating pictures and stories over and over again. 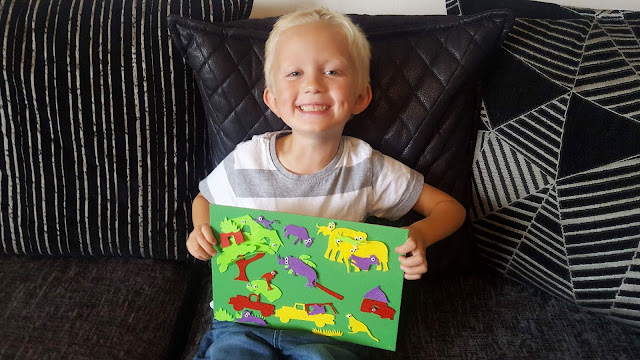 Overall we had a fantastic time making creations with our Fuzzy-Felt set. It was initially an activity I had planned to do with just Riley, due to the guide age on the box being ages 3 to 6. However the whole family ended up getting involved and both Emma and Ben also really enjoyed getting creative and producing their own fuzzy felt masterpieces. We all loved the fact that the pieces can be used over and over again, as well as being able to combine them with the other sets that are available. Emma was fantastic in creating funny stories for Riley based on the pictures he had made and it was lovely to see them laughing and joking together about what the safari animals were up to. He has already added the Farm Fuzzy-Felt play set to his Christmas list too, so he is already keen to start building up his collection.

You can find out more about the Fuzzy-Felt sets that are available by visiting the John Adams website, or their social media channels which can be found here: 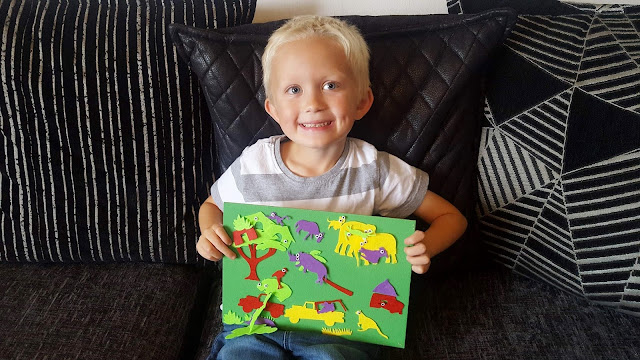 Disclaimer: We were provided with this product on a complimentary basis, for the purpose of providing an honest and impartial review of the product. All opinions and photographs are my own unless stated otherwise.
Posted by It's A Family Adventure at 20:13