A few weeks ago we told you all about the upcoming UK tour of Paw Patrol Live! Race to the Rescue. On Saturday the tour began with a wonderful performance at the Manchester O2 Apollo and my family and I were very excited to see one of the opening shows on Saturday afternoon.

My son Riley absolutely loves Paw Patrol and so we knew he would be absolutely over the moon to see them live on stage. We were all so excited to see his reaction when he saw his favourite pups singing and dancing and we definitely weren't disappointed.

Paw Patrol Live! Race to the Rescue shows that "No job is too big, no pup is too small!" and families can join Ryder, Chase, Marshall, Rocky, Rubble, Zuma, Skye and Everest for the show's first tour in the UK and Ireland. 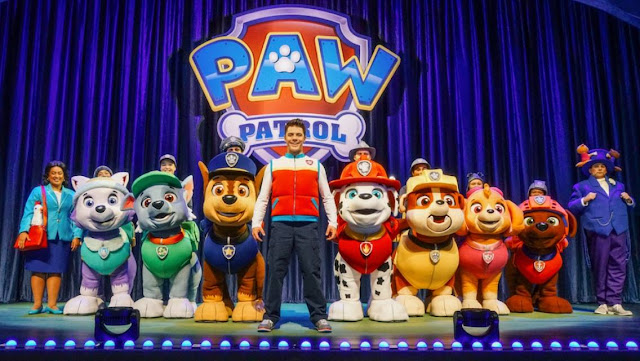 I told Riley that he could choose to take one of his Paw Patrol toys with him to the show and he quickly chose Chase as his special guest to accompany him. He was so excited and his older brother and sister joined in the fun on the way to the show singing the Paw Patrol theme tune in the car with Riley on the 40 minute journey to Manchester. Luckily the traffic was on our side and we reached Manchester with plenty of time and arrived at the venue an hour before the show started.

This was great for us as it meant no rushing and we were able to find a parking space, pick up the tickets from the box office, pop to the loo, buy some snacks and have a nosey at some of the merchandise on offer. Once we had finished in the lobby area we made our way through to find our seats and we were very pleased with our view of the stage.

Paw Patrol music was playing in the background and Riley began dancing when he recognised the Pup Pup Boogie song over the speakers. He began to get so excited when other children started arriving and he passed the time waiting for the show to start by looking out for people in costumes. Some children had some fantastic Marshall and Chase outfits on (which I have been told I MUST buy for Riley!).

When it came to the show starting time Riley quickly sat upright in his seat eager to see who would be heading onto the stage. We were immediately greeted by Ryder who got the audience going and encouraged lots of audience participation with singing and dancing and waving our cardboard pom poms around that we were given on arrival. 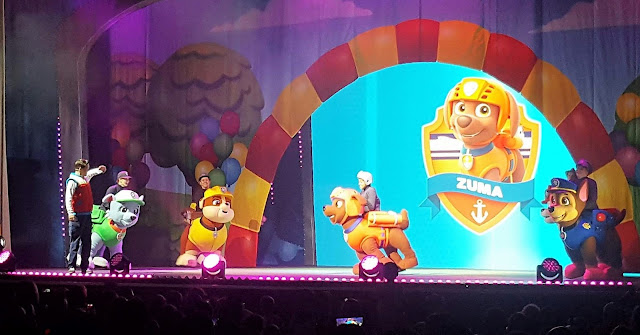 Once the pups started to be introduced on the stage I actually got a little bit emotional with a tear in my eye seeing Riley so happy and no less than 10 minutes into the show he was already asking if we could come back the next day to see it again.

Without giving too much of the story away, the show follows the day of The Great Race where Mayor Goodway and Mayor Humdinger from Foggy Bottom must compete to see who can reach the finish line first. Unfortunately Mayor Goodway injures her foot which means she has to yelp for help and the pups come to her rescue and save the day. The performance features lots of twists and turns, audience interaction, singing, dancing and a few comical moments too, so there is plenty to keep the whole family entertained. 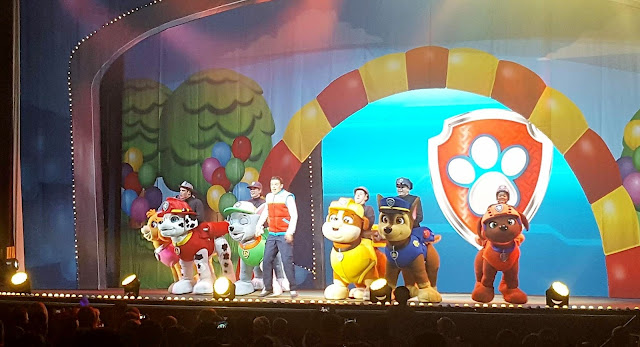 Mayor Goodway was my particular favourite in the show and I felt that the character was portrayed really well. The pups costumes were fantastic and Riley was so happy when we got to see some of their vehicles too! The costumes use Bunraku puppetry which is an innovating costume approach which helps to bring the Paw Patrol characters to life on stage. They really were fantastic and Riley was so mesmerised by the pups that he didn't even notice the puppeteers.

It is a high energy performance from start to finish and the running time of 80 minutes (including interval) is just the right length of time to keep little ones entertained and hold their attention. We all really enjoyed the show, not just Riley, and felt that it was an excellent family show.

Paw Patrol Live! Race to the Rescue will be continuing their tour around the UK & Ireland over the next few weeks with visits to London, Nottingham, Birmingham, Liverpool, Newcastle, Leeds, Cardiff, Glasgow, Belfast & Dublin. For the most up to date ticket information or for more information on the show then please visit the Paw Patrol Live! Race to the Rescue website here: Paw Patrol UK

You can also visit their social media accounts at:

Disclaimer: We were provided with complimentary tickets to the event for the purpose of providing an honest review of our experience. The information provided was correct at time of writing but is of course subject to change, so would always recommend visiting the shows own website to obtain the most up to date information.
Posted by It's A Family Adventure at 19:54