We have recently had the chance to try out the latest edition of the popular Drumond Park game Rapidough. We had all heard of the game before, and so we were really excited to have a family games night to review the game and see what it was all about. 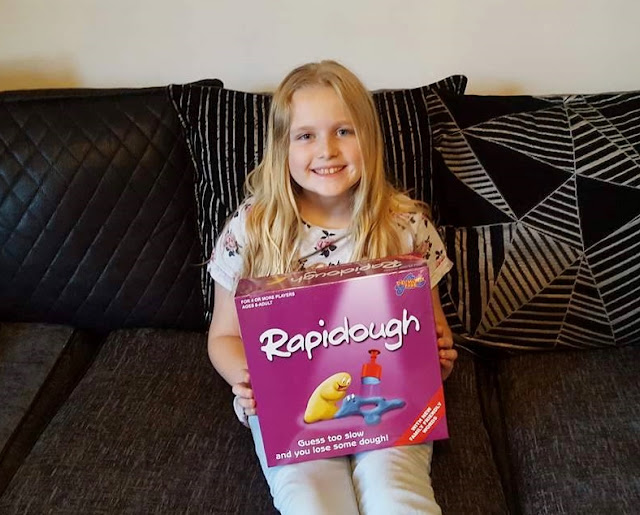 Rapidough is the UK's original and most popular team game of modelling charades. It is a game designed for the whole family so that everyone can join in and have lots of fun. It is a great way to get family and friends all laughing together and as well as being a fun family game, I can also see this being a great game to play with adults too if having friends round one evening.

The game itself comes in a square purple box with the slogan "Guess too slow and you lose some dough". My daughter thought this line alone was hilarious before the box had even been opened. The name of the game is printed across the front of the box in clear white lettering and there is an image of two sets of dough along with a plunger in the middle. 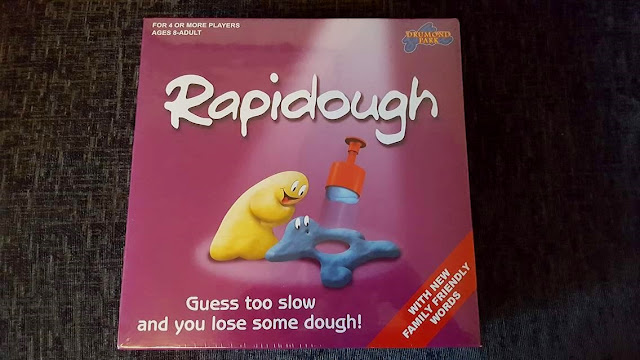 The top left hand corner of the box (as you look at it) recommends the game as being suitable for 4 or more players aged 8 to adult and the Drumond Park logo can be clearly seen in the top right hand corner.

The reverse of the box gives you some insight into what the game involves, with a paragraph of text briefly explaining the aim of the game. There is also some graphics that show what is inside the box, and some small images of a model that is being made during a game along with some suggestions as to what it may be. The box also advertises the fact that all the words involved in the game are family friendly which is reassuring, and there is also a small advisory to make buyers aware that the Rapidough dough contains wheat. 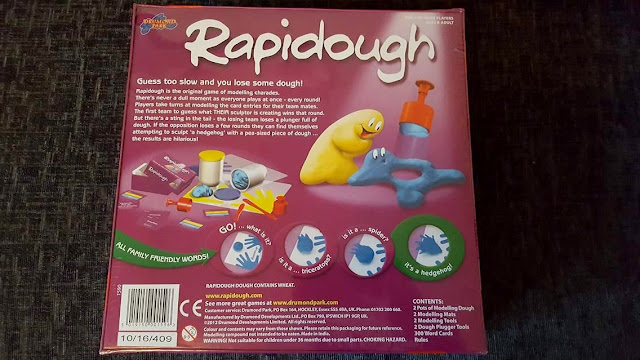 The bottom right hand corner provides a list of contents which are: 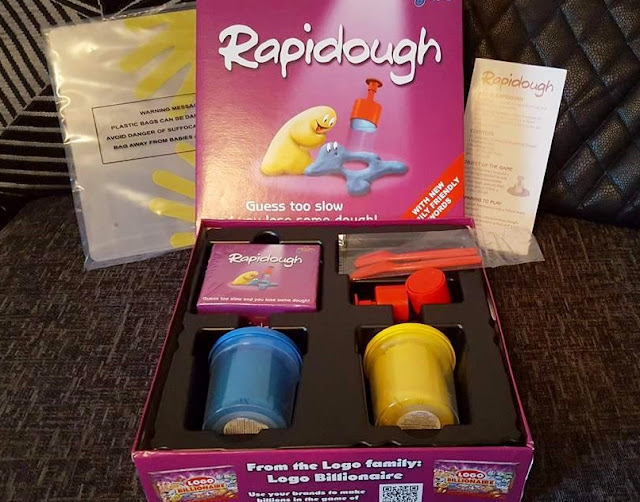 The game is played in two teams, and the modeller in each team takes a card and then attempts to sculpt the word or words shown into a shape. Their team mates must then try to guess what is emerging from the coloured modelling dough.

In each round, the first team to identify what's been modelled correctly is the winner. However, at the end of each round the losing team must have one 'plug' of dough taken away. This is when it gets really funny, because as soon as you start to lose dough, it becomes much harder to try and sculpt some of the words, especially when you are only left with a pea-sized amount!

We began by selecting our teams and made it a boys vs girls challenge, with my daughter and I on one team, and Mr F & Ben on the other. We shuffled the cards and then Ben took the card from the top and chose which word he was going to model. He then passed the card to Emma who then chose her own subject to model too.

When we were ready to begin, Emma and Ben each rolled their dough into a ball until I shouted "GO!". There is no specific time limit and so it is literally a race between each team to guess the correct word first. Mr F and I began shouting our suggestions straight away, and it became harder for the children to sculpt whilst laughing so much at some of the words we were coming out with. For example I thought the below picture was a dog or a sheep, but it was actually a jumper which I did finally guess correctly in the end! 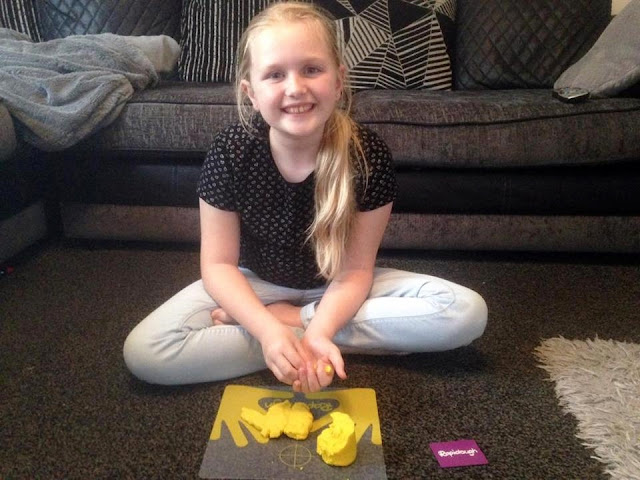 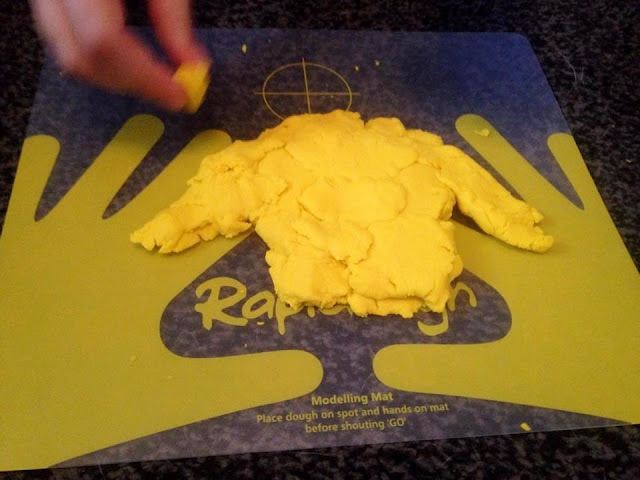 Much to my relief due to being very competitive, I guessed correctly first, and we were able to remove a plug of dough from the boy's team. The game ends when one of the team runs out of dough, but this took quite a while and so we were able to enjoy the game as a family for a good length of time before it was over.

We really liked the fact that this is a hands on game, and that you can use your creative skills to play. It was also great that we were all able to play at  the same time, so no one had to wait their turn or get bored. We really enjoyed the challenge and the competitive side of the game, and half way through it brought on a severe case of the giggles for me as I kept getting distracted by all the random words that the kids were shouting whilst I was trying to model my word. I am not the most artistic of people but it was so funny listening to what my daughter was interpreting my sculpture to be. 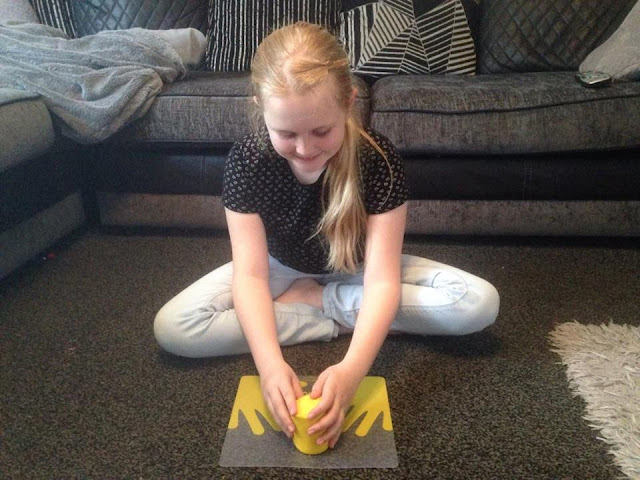 Obviously the game does contain dough, so its best to play the game on a table, or put a blanket/towel down on the floor before playing just to avoid any damage to carpets. We didn't lose any on the floor, but I know that if we were to let Riley join in then there would definitely be a few pieces here and there. The tubs have lids so as long as they are put on properly after each game then there is no reason as to why the dough may go hard, however if that was to happen it would be very easy to replace the dough or even make some yourself.

Overall we had a fantastic time playing this game, and would definitely recommend it to others. It is a great family game suitable for ages 8+ and has an RRP of £24.99. It is competitive and can get quite noisy with the shouting of the guesses but this all increases the fun factor, and makes it really funny. Everything packs away into the box neatly and so storing the game away isn't an issue. If you are after an easy to understand game that makes you laugh, then this is ideal!

Disclaimer: I was provided with this game on a complimentary basis for the purpose of providing an honest and unbiased review. All opinions and photographs are my own.