A few months ago, I became aware of an upcoming cinema release called "Peppa Pig My First Cinema Experience"which is due out in cinemas on the 7th April. I have never taken Riley to the cinema before, as I have always worried that he wouldn't want to sit through the whole film, and so as I learnt more about this, it sounded absolutely ideal.

This April, fans of Entertainment One's (eOne) Peppa Pig, will be snorting with delight as everyone's favourite little piggy heads to cinema's nationwide in an exciting big-screen adventure. Described as a perfect introduction to the cinema for preschoolers 'Peppa Pig My First Cinema Experience' is an hour of snorts, giggles and Peppa fun. Featuring all new stories, as well as new characters Policeman Panda (David Mitchell) and Mrs Crocodile (Jo Brand). 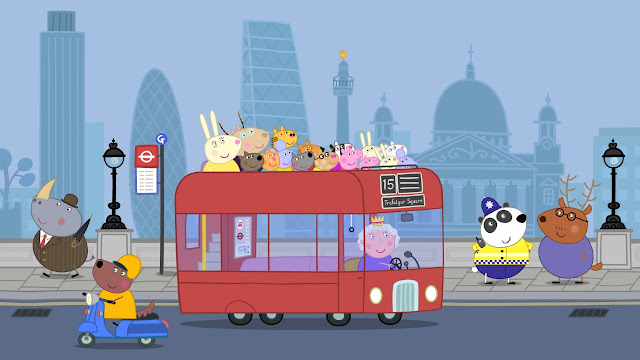 In the first of nine never-before-seen episodes called 'Peppa Visits London', The Queen takes Peppa and her friends on an exciting tour of London in a double-decker red bus!

The other 'oink-tastic' episodes include 'The Police', 'Canal Boat', 'The Zoo', 'Move to the Music', and a four-part adventure in which Peppa goes on an exciting holiday to Australia to visit her friend, Kylie Kangaroo.

Between the episodes, little ones (and parents too!) can join in with games, singing and dancing as there will be on-screen interactive entertainment featuring live action Peppa and George characters and their friend Daisy, in a colourful new world.

I love the fact that Peppa Pig My First Cinema Experience isn't a feature length film, but is in fact a collection of interactive episodes, that children can sing and dance along with. With it being aimed at pre-schoolers I won't need to worry if Riley is a little bit noisy, or wants to join in with the songs, and it will help to make our first trip to the cinema together that little bit more relaxed. Running at approximately an hour in length, it is also the ideal length of time to hold Riley's attention, and so we will definitely be heading to the cinema on it's release.

To celebrate, I'm giving a lucky reader the chance to win a bundle of Peppa Pig goodies worth over £100 including a DVD, Penguin Peppa Goes to London Book, HTI Electronic Bubbliser and Drum, Trends Alphaphonics Campervan, Portmeirion Mug and Plate Set, Bladez Hop and Squeak, Worlds Apart GoGlow My First Torch, Alligator Travel Pillow and Tomy Doodle Bag. For more info and to book your tickets, head over to www.peppa1stcinema.co.uk 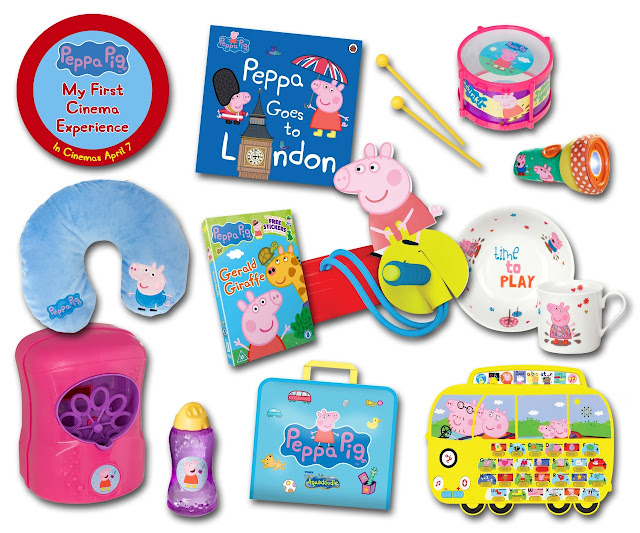 If you would like to enter the competition, please use the Gleam form below. Good Luck!

Terms & Conditions: Entry is open to UK residents aged 18 years or over. Any bulk/third party entries will be disqualified. The winner shall be drawn at random from all eligible entries on or shortly after the closing date of 14th April 2017. The winner shall be notified by email and will have 14 days to confirm that they wish to accept the prize. Should the winner fail to respond, then a new winner shall be selected at random from the remaining eligible entries. The winner's details will be shared with the promoter for the purpose of prize fulfillment, which shall be sent directly from the promoter. Please allow up to 28 days for delivery. There is 1 (one) prize that features the items as listed above. In the event of any product becoming unavailable, the promoter reserves the right to replace with a different item of equal value.
Posted by It's A Family Adventure at 09:00