Wookey Hole is a place that I have wanted to visit for a long time. We had made plans to visit last summer whilst camping around the UK, but as a result of bad weather, our holiday ended sooner than expected, and we sadly missed the chance to go. Therefore, as soon as I found out that we would be visiting Somerset this April, I made it a priority that we would have to visit the Wookey Hole Caves and find out more about the legend of the Wookey Witch. 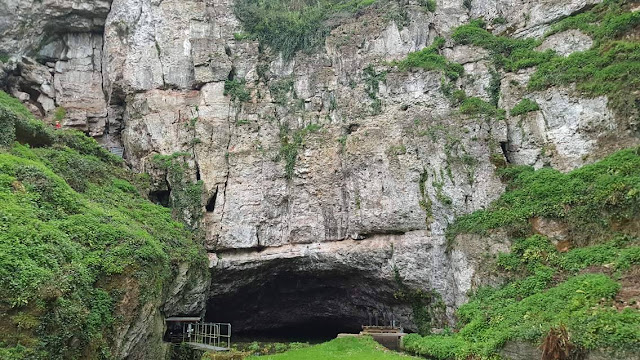 Our journey from Burnham-on-Sea to Wookey Hole took around 40 minutes, and saw us venture along many winding roads and lanes. It was really well signposted and so we found the attraction with ease, and with little help from the sat nav. The first thing that caught our attention when we arrived was the huge hotel located at the top of the car park. The hotel looked lovely, and there seemed to be ample parking for both hotel guests, and attraction visitors.

We made our way over to the ticket kiosks, where we were greeted by the Wookey Witch whilst waiting in line. She wasn't at all scary, and engaged in conversation with the children, asking where they were from, and whether they knew anything about the caves already. When it came to our turn at the kiosk, we received a friendly greeting, and we were provided with a map and a sheet of paper for their Easter Egg Hunt.

The Easter Egg Hunt, featured a number of clues, which would tell you where to find a rabbit, who would be holding a letter. You then had to write this letter down on the sheet of paper, and continue to follow the clues, until you had completed the answer in full. This looked really good fun, and I searched my bag for some pens, so make sure you have a couple spare if visiting over Easter. 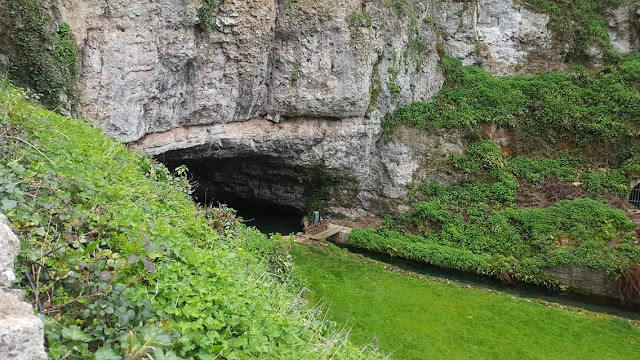 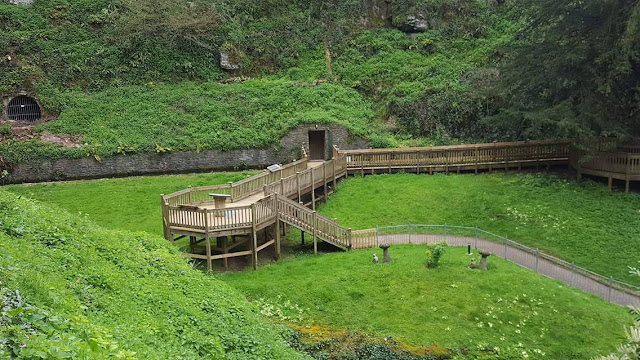 The clues began at the start of the cave tour, and so we made our way up the hillside path, towards the entry to the cave tour. Here we were met by a lovely lady with a great sense of humour trying to sell glow sticks. My children didn't want one of these, but we had a nice chat and laugh with the lady and it helped to pass the time whilst waiting for our tour to start. The tours run every ten minutes and so we didn't have to wait too long for our guide despite it being busy. 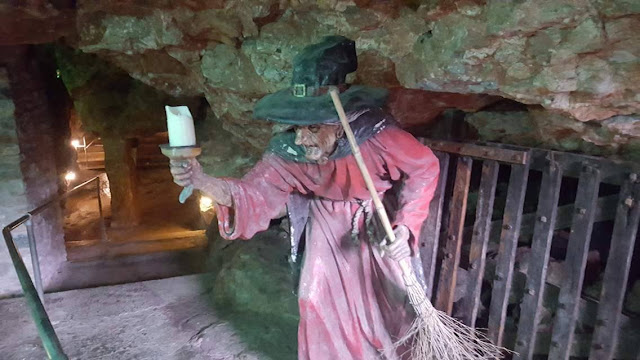 Unfortunately I didn't catch our tour guides name, but he was excellent and had my children captivated from the very beginning. I sometimes worry that my children will get bored on structured tours where they have to listen to someone talking, but even Riley was interested in the stories he had to tell. The guide spoke loud and clearly to make sure that everyone could hear, and also answered questions that were asked. He also clearly fore warned us of any low areas or steep steps so make sure that we knew to be careful in certain parts. 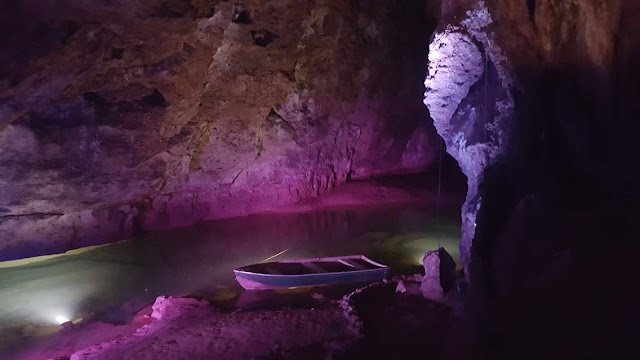 The caves were wet and slightly slippy in areas, and at several points the height of the areas you needed to walk through dipped to no higher than 4ft. We loved this though as we were in an actual cave and felt like explorers wandering through from chamber to chamber.

As we made our way into chamber two, there was a large area of water which was beautifully lit by purple lighting. The guide told us more about the Wookey Witch and the legend that surrounds the caves, and also pointed out several notable formations in the rocks. We found this really informative and fascinating.

In chamber three, we learnt more about the diving that has taken place within the caves. I found this really interesting as well as intriguing. It must be so scary diving through the dark areas, unsure of what you might find. 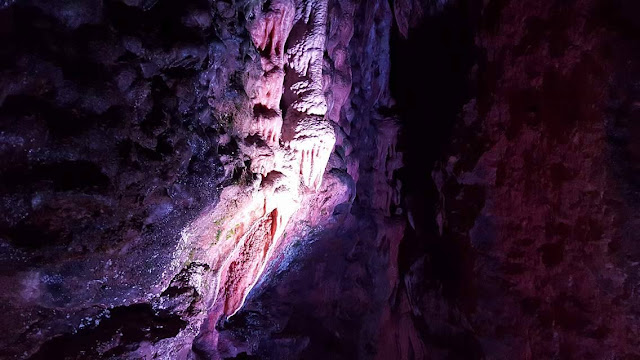 Part way into our tour, we came across an area which is used to store cheddar cheese. The caves maintain a constant cool 11 degrees celsius temperature all year round, and so cheddar is matured within the caves and can also be bought from the shop near the exit.

The chambers that followed were recent additions to the caves that had been opened up for guests to walk through. The rock formations in some parts were amazing, and as we visited the newer part of the tunnels, we were provided with hard hats for our safety. 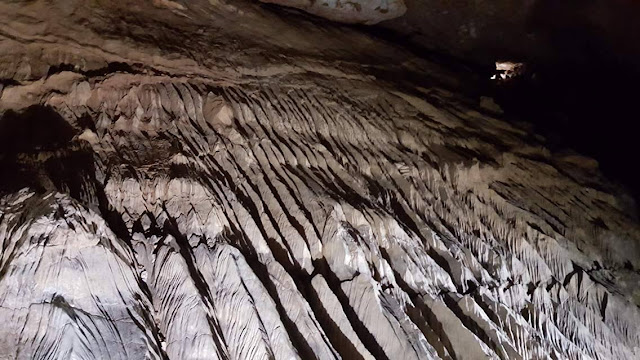 The tour was fantastic, and well worth the visit. It was something I had always wanted to do, and was really pleased to have had the opportunity to experience the Wookey Hole Caves. The tour guide was really good, and made a few jokes around the tour which gave us a giggle. As you make your way down the steps, you find yourself back outside and at the end of the tour. In total it lasted approximately 45 minutes.

I had read numerous reviews on Wookey Hole Caves prior to our visit, and had seen a few people mention the attractions that follow the caves being 'mismatched'. Whilst I agree that these aren't really in keeping with the caves and don't follow a particular theme, they are enjoyable nonetheless, and as the main purpose of our visit was to experience the caves, everything else that was included within the entry price was a bonus. We also thought that these additional activities that Wookey Hole Caves provide, also make the entry price really good value for money. They make the attraction that would only be a couple of hours at the most, into something that you can visit all day.

On leaving the caves you make your way down a walkway where you then arrive in the Prehistoric Dinosaur Valley where there are lots of models of dinosaurs, as well as a giant statue of King Kong. As we continued along the path, we came to the 4D cinema and saw that there was a show starting soon, so we joined the queue and waited approximately ten minutes for the doors to open. 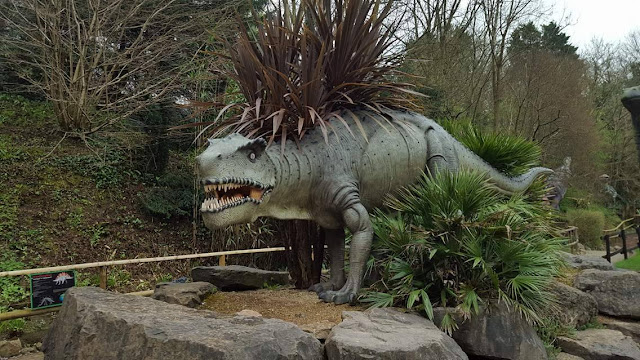 We have visited numerous 4D cinemas in the past, but we were really impressed by this one at Wookey Hole. The start of the attraction saw you waiting in a holding area, where the witches bat had tried to do a spell which had gone wrong, and as a result the room was upside down. The witch then appeared on a television screen and some dialogue between the witch and the bat continued for a short while. The secret passageway to the cinema then opened where we took our seats.

The seats were really comfortable, and the short film that was shown was really good. Riley absolutely loved it and it captured his attention the whole way through. I loved the fact that he laughed throughout the whole film, and made various woooaaahhhh noises as it appeared that we were riding on a rollercoaster. The effects were fantastic too, and even made me jump in some parts. When the film had finished, Riley had a huge smile on his face, and said 'Mum, I really loved that' which was a great response. Ben and Emma thought it was great too, and had it not began to get busier, I think we would have definitely watched it again.

Following the 4D cinema, we visited the caving museum, where we saw lots of the equipment that had been used over the years. We also watched an interesting video, following someones caving journey through the Wookey Hole Caves. We liked that this was connected to what we had just learnt during the cave tour, and it helped to expand on what we had learnt from the tour guide earlier.

After this we had a short stop in the large indoor play area. There was plenty of seating, and a nice soft play area for children, so we enjoyed a twenty minute rest here whilst the children burnt off some energy. We enjoyed the opportunity for a sit down, before continuing our visit with a trip to the Penny Arcade. We really enjoyed this, and it cost 50p for five old coins that could be used in a wide range of old arcade machines. These varied from slot machines to pin ball games, and even a football table. It was nice to see how the old machines compared to modern day versions, and Riley really enjoyed riding on the mini carousel that was in this part of the attraction too. 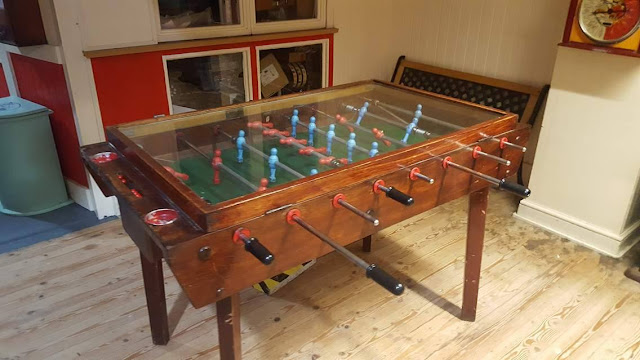 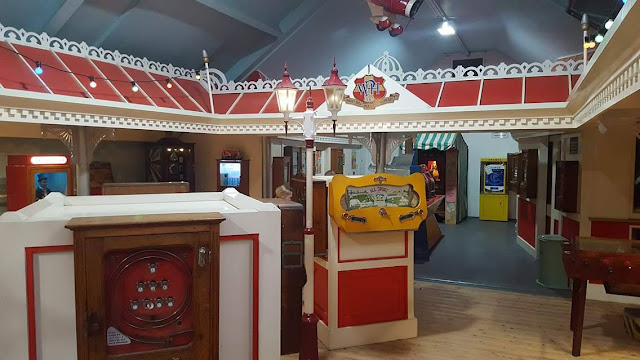 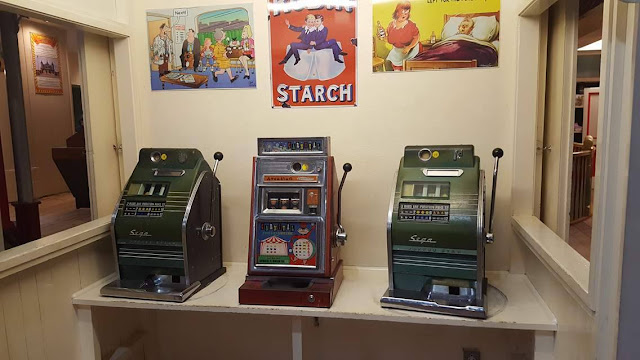 After a quick go through the mirror maze, we walked back through the Penny Arcade and exited via the shop. We had began to get a little hungry by this point and so we made our way down to Captain Jacks restaurant to have some lunch.

There was a huge amount of seating in the restaurant, so plenty of space for everyone, and there was a nice selection of both hot and cold food available. The food was around the average price for an attraction restaurant with a adult main of sausage, chips and beans costing £5.45, and sandwiches costing around £3.50 for a tuna mayo filling. The service was quick, and the food was hot so it was an ideal place to stop for lunch, knowing that we could return to some of the attractions within the building again after a bite to eat.

On our way to the restaurant, we had noticed a sign for a circus theatre show, unfortunately we had just missed one of the shows prior to eating, and so we didn't get the opportunity to watch this, however I spoke to another family who said that this was really good, and worth a watch. As the kids wanted to enjoy a game of mini golf though, we opted to do this instead of returning for a later show.

The pirate adventure golf was busy but good, and we didn't mind waiting whilst other families completed the stages they were on. Everyone seemed more than happy to be patient for one another, whilst letting children try their hardest to get the ball in the hole. It was great fun, and a nice end to our day out.

Overall we had a great day out at Wookey Hole Caves and there was plenty for my family to see and do. The caves themselves were really interesting, and I was fascinated by the rock formations as the tour guide led us through the chambers. The 4D cinema, penny arcade, and indoor play area were all added bonuses to our day out and were thoroughly enjoyed by the kids. I liked the fact that there was plenty more to do after the caves, which on there own would be a very short day out and so these added attractions offered good value for money on the entry price.

Entry prices to the attraction are as follows: 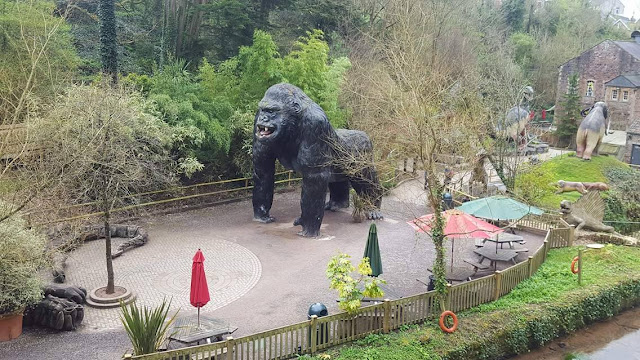 *Disclaimer - We were provided with complimentary admission for the purpose of providing an honest and impartial review on the attraction. All words and opinions are my own unless otherwise stated. Entry prices, opening times and attraction information correct at time of writing, but I would always recommend checking the company website for the most up to date information.