Blaze and the Monster Machines has been a firm favourite in our household for quite some time. It is also one of only a few children's programmes that I actually enjoy too, and I love the fact that it is packed full of educational elements. It is crazy that by the age of three, Riley had a clear understanding of what inertia was and had also starting using the words trajectory and friction when playing with his toy cars and trucks. All of these were words that he had picked up through watching the show.

We were therefore delighted to hear about a new Blaze and the Monster Machines toy range, that was available just before Christmas, and we purchased Riley several of the toys as gifts. Since then, numerous other products have entered the market, and when we were offered the chance to review the new Fisher Price Blaze Light & Launch Hyper Loop, we literally jumped at the chance. 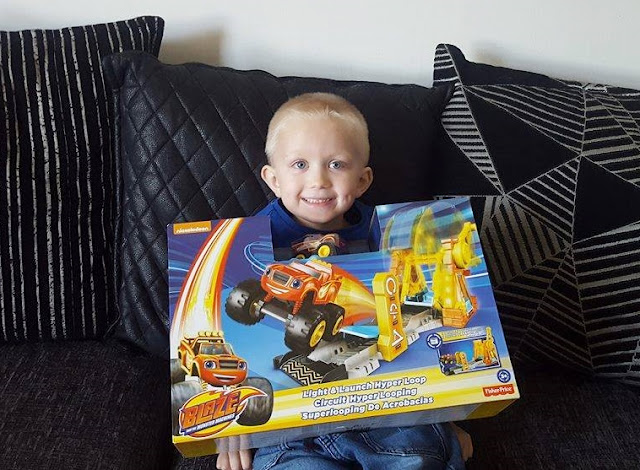 Riley's first impressions when he first saw the box was "Wow, that's amazing". He couldn't wait to get the box open and see what was inside. The front of the box displayed some fabulous Blaze and the Monster Machines graphics, and the visual image of the product gave you a good idea as to what the toy could do. At the top of the box, you could see the Blaze vehicle clearly, which was great, as this enabled you to get a better impression of the size of the product prior to opening. It also looked of great quality, which immediately gave me confidence in the toy, and I knew that it would be something Riley would really enjoy playing with. The box also states that there are 9 different stunts available to do with the set, and just below this, you can find the age recommendation of being suitable for children aged 3+. 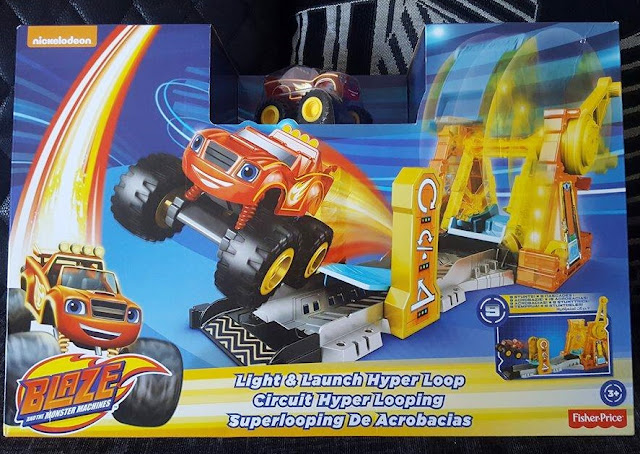 The rear of the box, gives you more of an insight into the product and how it works. There is a large image of a child enjoying playing with the product, and it shows several different ways that the panel at the end of the race track can be set up in order to allow Blaze to Crash, Race, or Soar.

To the right hand side, there are some basic three step instructions, supported by pictures, that show you how to use the toy. Step one is to Rev, step two is to release, and step three is to launch.

The bottom rear of the box, also shows you some different Light Riders that can be purchased separately, to allow you to collect and connect your Blaze and the Monster Machines collection. 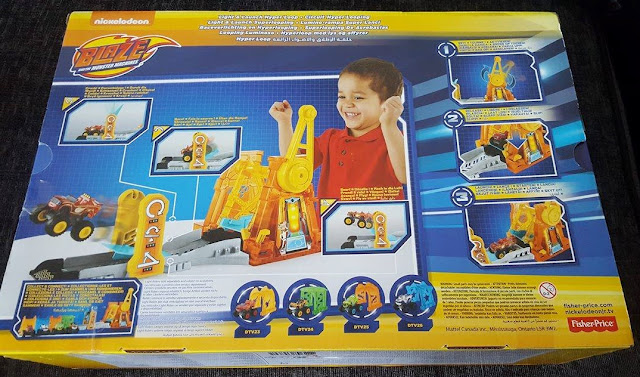 The top of the box, had pre-warned me of adult assembly being required. I will be honest and say that this can sometimes put me off purchasing a product, as there have been so many occasions where I have purchased something for Riley, only to find that it is in 100 pieces when you open the box, and contains more instructions than a flat pack wardrobe. I needn't have been concerned with this toy though, as on opening the box we found that there were only a few pieces to assemble, and all of it was really straightforward.

You do require a Philips screwdriver to safely connect one part, but this took me literally seconds to do, and wasn't difficult in the slightest, and just involved connecting three screws. 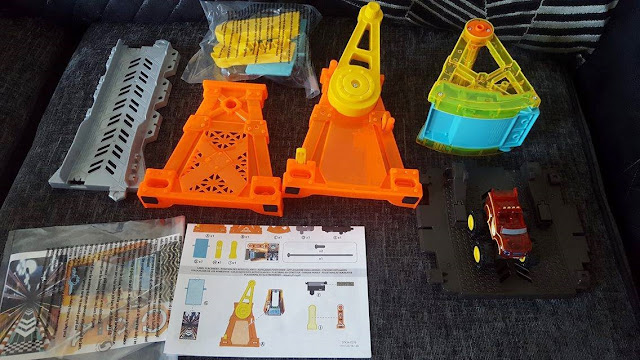 As mentioned previously, Blaze looked a really good quality toy on the top of the box, and once we had removed him from the packaging, we were impressed with both the design and size of the toy. It was an ideal size for Riley to play with when enjoying his other vehicles, as well as using it with the Light & Launch Hyper Loop. It had a nice weight to it, and didn't feel flimsy at all. 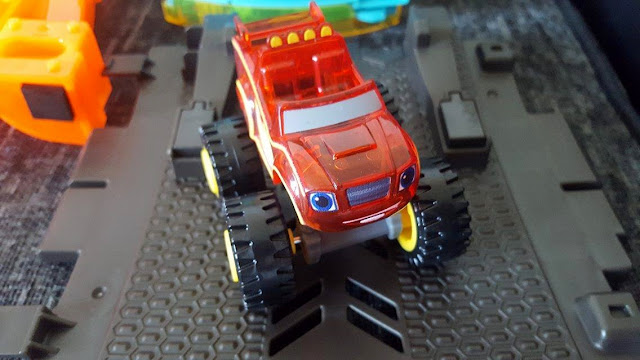 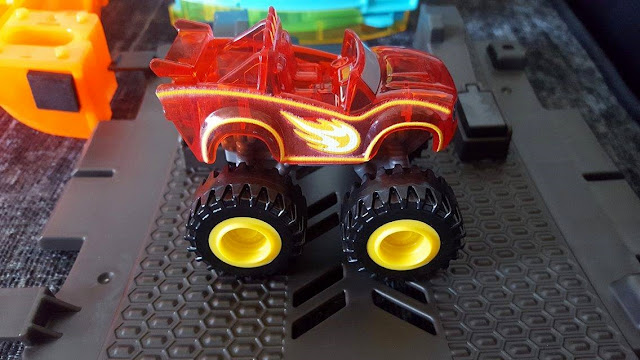 Once we were all set up and ready to go, I had a quick read through the instructions again as to how it worked, and showed Riley how to work the lever and the release button. He decided that he wanted to have the panel at the end set ready to launch Blaze, and so we adjusted the yellow towers and blue panel as required. 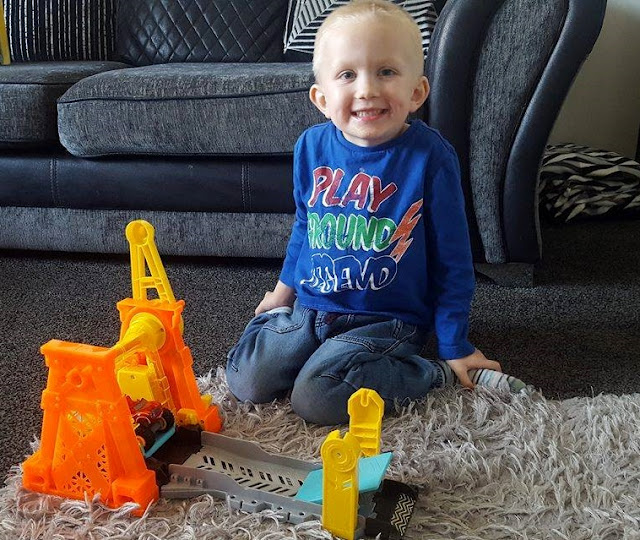 The first step was to place Blaze into the Hyper Loop and charge it up using the lever in order to activate the Speed Lights. Once it is charged the lights turn on and flash. 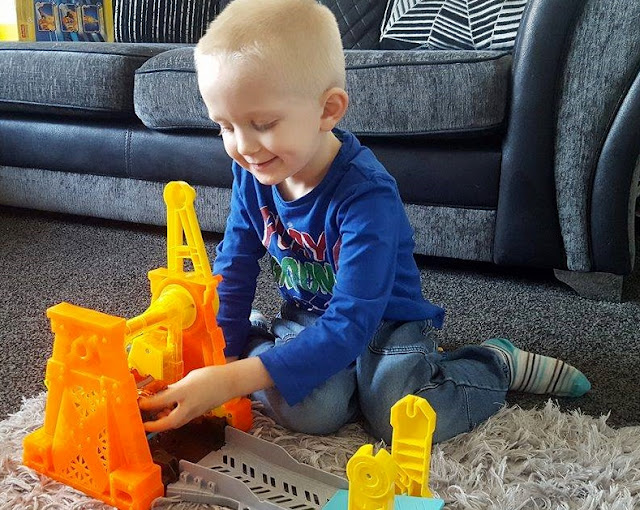 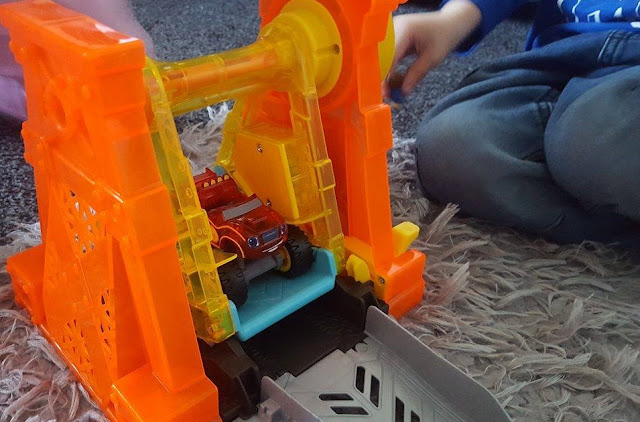 Once it is fully charged, you press the release button and the Hyper Loop sends Blaze into a super spin over a 360 degree rotation, which then sends him blazing down the track. 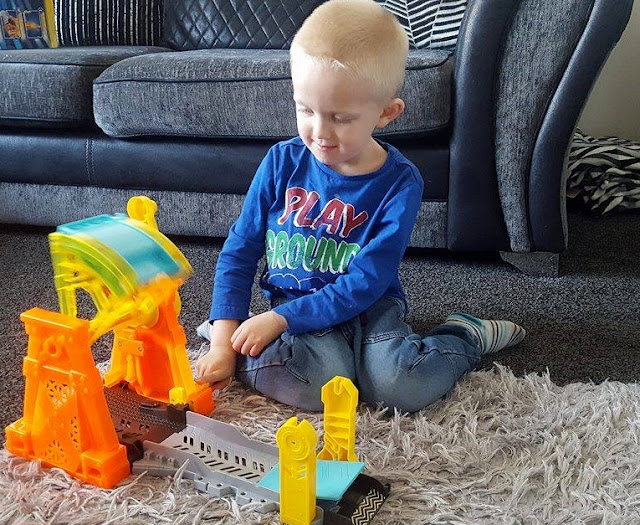 Riley loved using the Hyper Loop to launch Blaze down the track, and quickly got the hang of how to do it. He also really enjoyed moving Blaze up and down the track himself, and creating his own little rescue missions. It wasn't long before he started to build on his imaginative play by introducing some of his other toys to the playset, where his character figures took it in turns to press the release button on the Hyper Loop (with Riley's expert help of course). 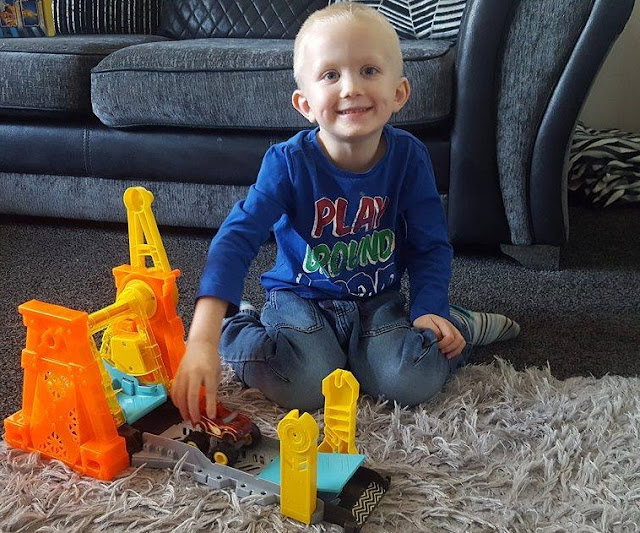 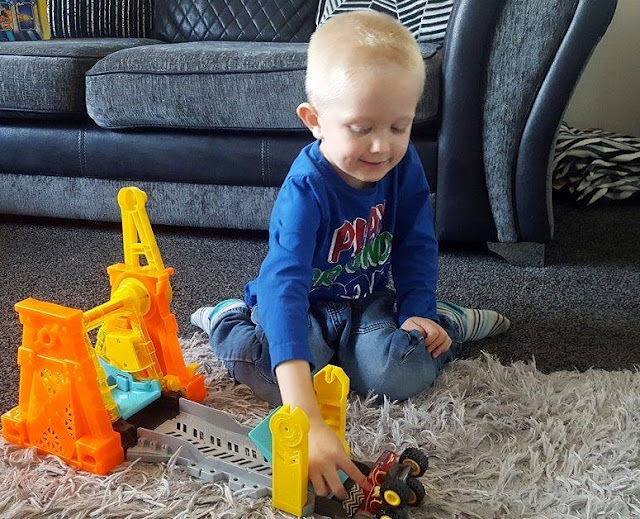 The blue panel allows you to adjust the playset to numerous configurations, and can be used as both a ramp to launch Blaze from, or as a flap that Blaze can drive through. The two yellow towers that the panel is attached to, can also be moved into different positions on the track with ease, and Riley was able to do this without any help from me.

We both really liked the product, however the only thing I was slightly disappointed with was the lights. These only stay on for a very short period and are hard to see when the Hyper Loop is spinning. I would have personally preferred it if the lights continued along the side of the track for a better effect, but realise that in turn this would have then possibly prevented the movement of the yellow towers.

Overall, we were really pleased with the Blaze and the Monster Machines Light and Launch Hyper Loop. Riley absolutely loved it, and wants me to purchase the other Light Riders as soon as possible, so that he can re-create some stories from the show. I was happy with the size of the product, as it wasn't too large to be stored away neatly and didn't take up too much space. I also felt that the design and quality of the product was excellent.

The RRP of the product is £29.99, however this is currently available to purchase from Argos for only £24.99 and can be found here: Blaze Hyper Loop Playset

Disclaimer: We were provided with this product on a complimentary basis, for the purpose of providing our honest opinion and thoughts on the product. All opinions and photographs are my own.
Posted by It's A Family Adventure at 18:31