The Train Journey from Zurich to St. Moritz

As transfers go, the train journey between Zurich and St. Moritz is pretty spectacular, with picturesque views a plenty and stunning scenery at every turn. The large windows allow you to fully take in the beautiful backdrop of your journey and as the train ride takes you higher into the mountains, the landscape and surroundings become quite breathtaking. 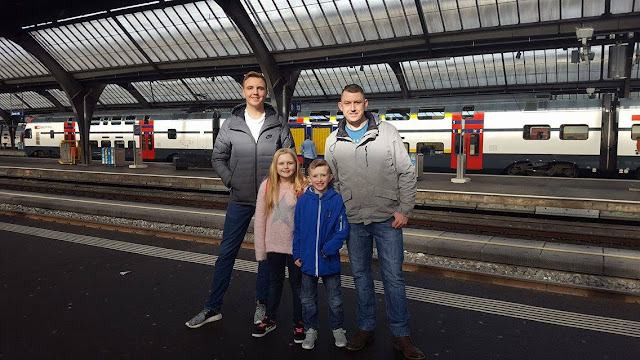 The transfer to St. Moritz began in Zurich Flughafen airport, where my husband and children caught a double decker train to the main Zurich Station. Once there, they made a quick change of trains and departed on the 90 minute adventure to Chur. It wasn't long before the children started to spot signs of snow, and as they travelled further, the snow levels began to increase quite rapidly. 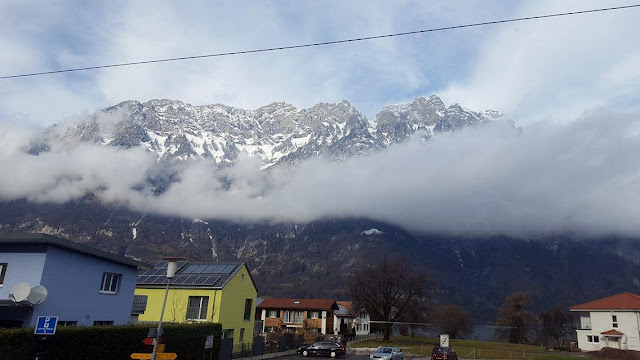 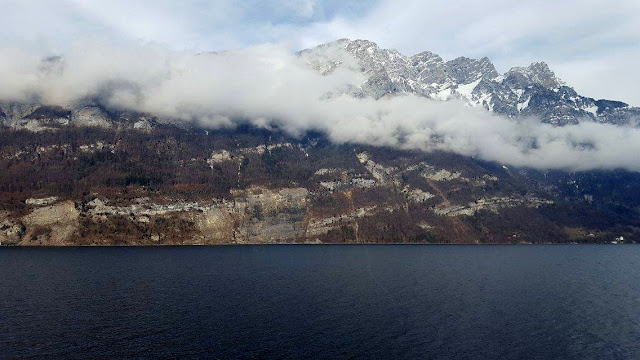 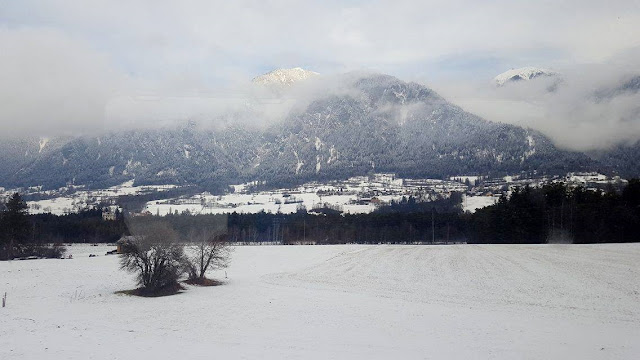 The seats were comfortable, and after a short period of travelling, a catering trolley came round where foods and drinks could be purchased. Drinks are very expensive in Switzerland averaging around CHF 6 each which is roughly £4.50.

On arrival in Chur there was a short wait for the next train which would carry my family into St. Moritz station. This was the longest part of the journey, but again the views were amazing and there was always something to see out of the windows which helped time to pass quickly. This train was much busier than the previous train, however with the St. Moritz World Ski Championships 2017 taking place, it was expected for it to be very busy and crowded, and so this was no surprise.

As they continued on their adventure, my husband and children watched as the snow fell outside, and the sky began to darken with snow clouds. The last time my children had experienced snow fall where we live in Wales was back in 2013, and so they were very excited, and eagerly waited with anticipation for the moment where they could depart from the train and jump straight into the waiting piles of snow. 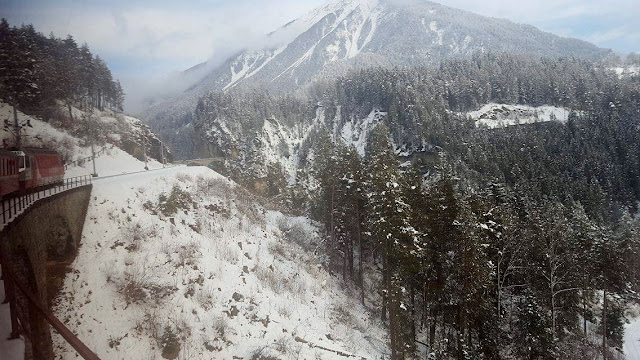 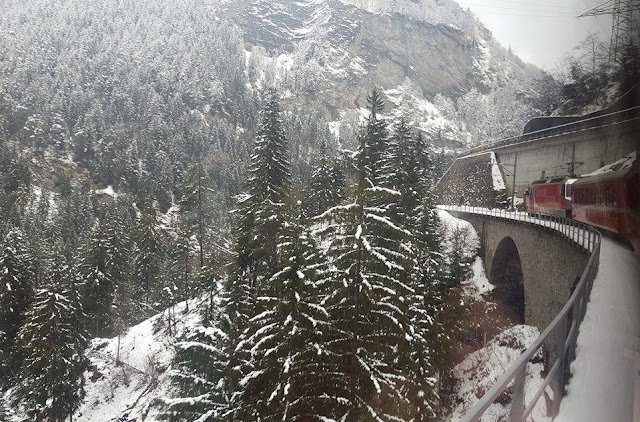 My son Ben has a dislike of heights, and so he was tempted to look away at times as the track ascended, but struggled to draw his eyes away from the beautiful sights of the snow capped mountains. 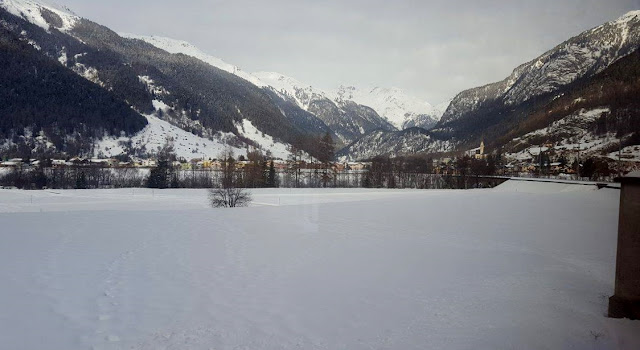 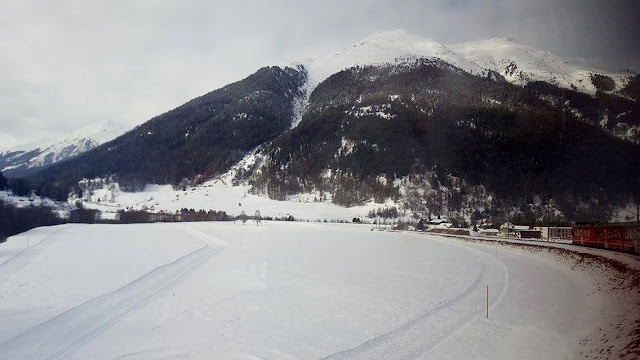 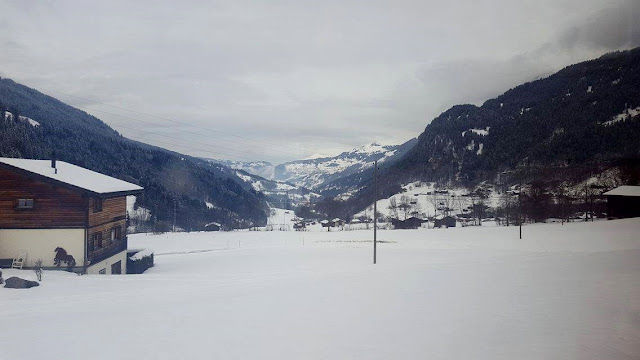 The total journey time was 3 hours and 40 minutes, although it didn't feel that long as there was always plenty to see and talk about which made the experience seem a lot quicker.

The fare was CHF 162.00 (approximately £129) for an adult return and CHF 81.00 (approximately £64) for a child, though prices may be cheaper dependent on time, day or class of travel. The tickets my family had also allowed them to take any route back to Zurich, and so my husband chose to travel via Landquart on the way back a few days later, which took a slightly shorter time of 3 hours 26 minutes. 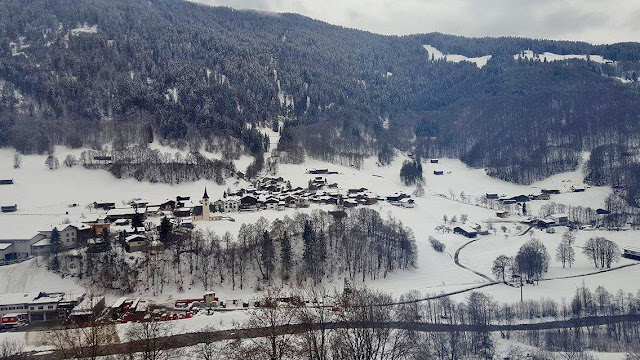 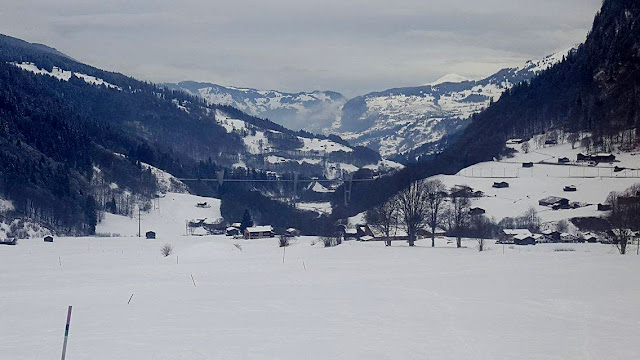 Overall it was a fantastic experience travelling from Zurich to St. Moritz. Not only did it help my children to create many picturesque family memories, but it also gave them the opportunity to see some breathtaking scenery.
Posted by It's A Family Adventure at 11:04