This month we have another fantastic Aquabeads product to review for you, in the form of the Aquabeads Animal Friends Set. This is one of the refill sets which you can use alongside your exisiting aquabeads tools and with an RRP of only £4.99 it is well priced within pocket money range too.

The set contains over 600 beads, and allows your child to get creative in making numerous animals of various shapes and sizes. It is important to note that because this is a refill set, it does not include a layout tray or water sprayer, which come in the larger sets or can be bought separately. 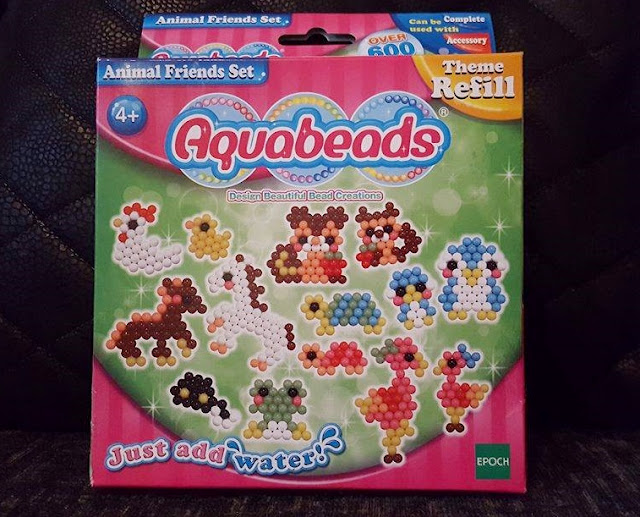 The box is of a compact size, with a lovely display on the front of all the animals that you can make. My son Riley who is 4, enjoyed looking at each one and naming them, and asking everybody which animal they would like to make. He was convinced however that the bottom left (as you look at it) was a killer whale. I will admit that I initially thought this too, until realising that there was a big and small animal theme throughout the designs and so I now believe that this is a tadpole, due to it being pictured next to the frog. 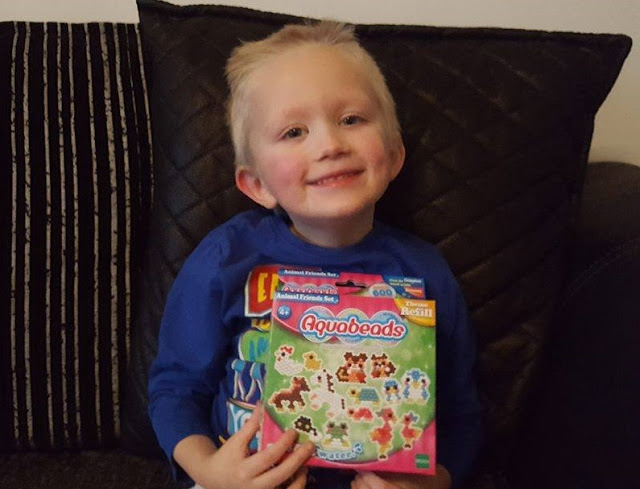 The complete list of animals are:
The rear of the box is less graphic than the front, but shows a small image of the accessories required which are a layout tray and sprayer. These can be bought separately but if you already own one of the larger sets then the chances are you will already have these at home. There is also a list of contents and an image displaying what template sheets are included inside. This is then followed by a safety warning in various different languages.

On opening the box we found 4 template sheets and a large bag which contained nine smaller bags that each had different coloured beads inside along with instructions. The colour choices were plentiful and included red, orange, yellow, light green, light blue, pink, white, black and brown. Three of the template sheets featured 4 animals, and one of them featured only two. I think I would have personally preferred only two animals on each template so that they were slightly larger, as some of the animals such as the chick and tadpole were very small and didn't take very long to make. This is however a personal choice and others may prefer the smaller designs due to them being less time consuming and easier for younger children to complete. 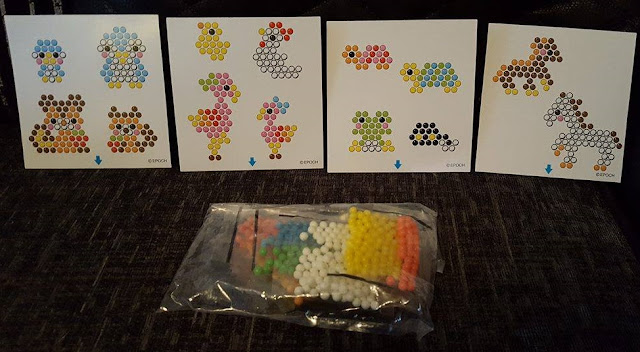 The first design we chose to make were the horses, so we selected the template and slid it into the back of the layout tray. My son began to fill the larger white area first as he prefers to do the main body of the design first and then fill in any gaps. We do have several of the Aquabeads pens that we have acquired from our larger sets, but we all find it easier to use our hands to add the beads for the main parts and then use the pen for the smaller details.

My son kept bumping the layout tray whilst reaching for his beads, which in turn knocked some of the beads out of place. To help prevent this from happening again, we gave the design just one very light spray as he finished each area which helped to hold the beads in place much better whilst he completed the design. 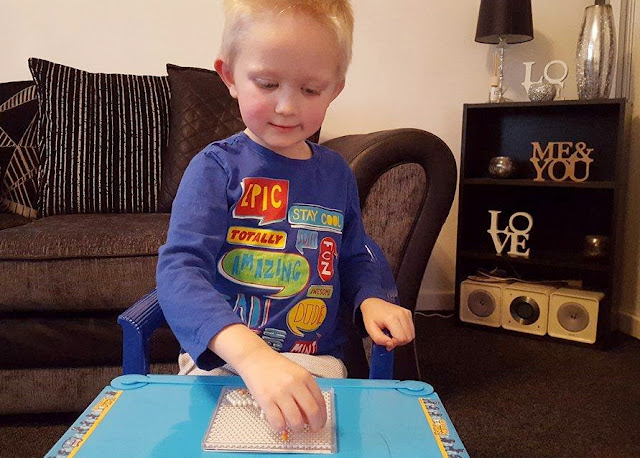 On completion we gave it a good spray and left the designs to dry for a couple of hours whilst we had dinner. I have began to start leaving ours to dry on the kitchen worktop which is near a radiator, and I am not sure if it is a coincidence but I always find the designs much easier to remove from the board when I let them dry here. 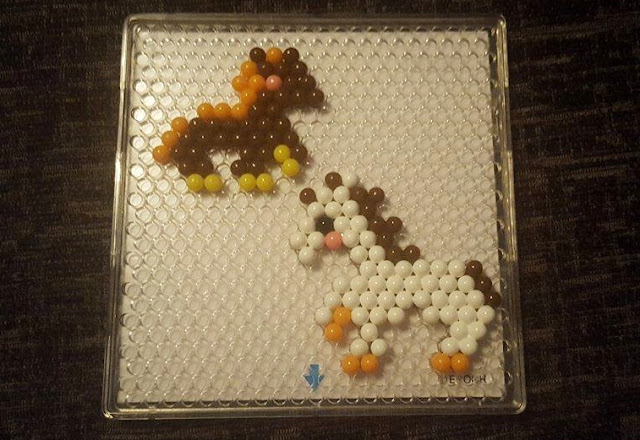 The next template we used was the penguin and squirrel designs. We really enjoyed these as they required lots of different colours and so my son needed to concentrate well and focus. This kept him busy for nearly an hour, and he was very proud when he had finished, feeling a sense of accomplishment from completing a harder design. There was only a couple of occasions where he needed my help which were the larger squirrels tail, and applying the noses to each of the squirrels to give the animal a 3D effect. 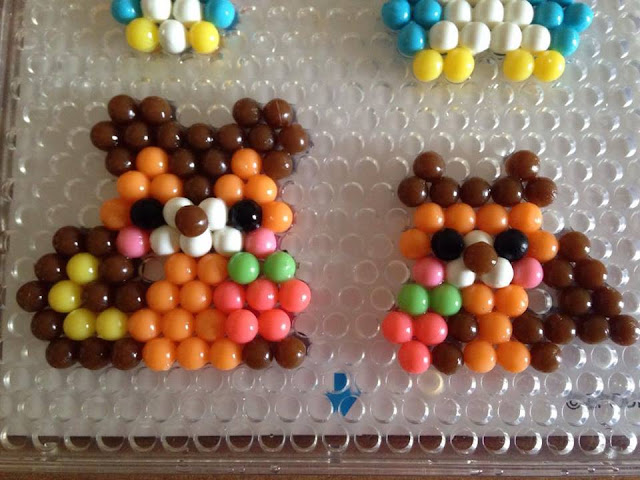 My sons favourite was the large squirrel, and mine was the large penguin as I thought the colours looked lovely and stood out well. Riley has decided that we are going to make a family of penguins in all different colours which is a great idea! After we had completed the animal templates we also had some beads left over from the set to add to our collection. 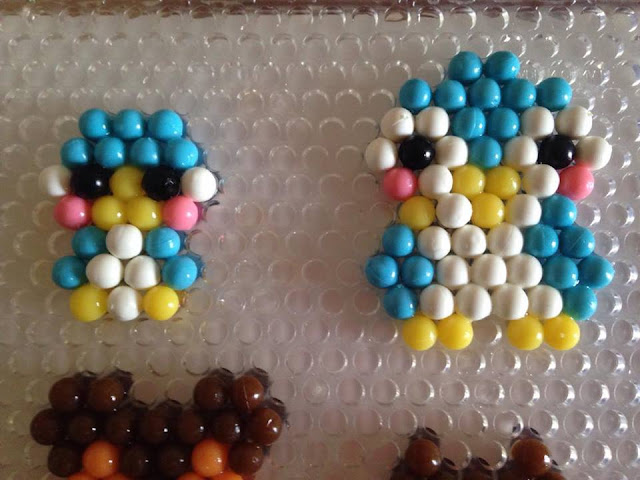 As mentioned previously the RRP of this set is only £4.99 which is a bargain and perfectly priced for a weekend treat. something to do on a rainy day or even a small birthday present for someone. 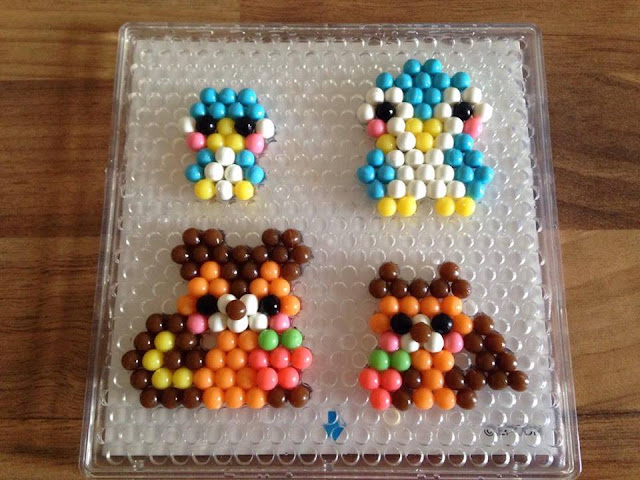 Overall we have been really pleased with this refill set. Riley found them easy to do without my assistance, where as he often has to ask for help with the larger template design so I think he actually enjoyed this more than some of the other sets as he could be more independent. However on a personal level I prefer it when he needs my help as I actually really enjoy making them too, and in the past I have found it a really nice activity to do together. This is a lovely set to add to any Aquabeads collection and I would definitely recommend it to others.

I also have the fantastic opportunity for one lucky reader to win one of these Aquabeads Animal Friends Sets. Please enter using the gleam form below. Good Luck!

Disclaimer: I provided with this product on a complimentary basis for the purpose of writing an honest and impartial review. All opinions and photos are my own.

Terms & Conditions: Entry is open to UK residents aged 18 or over. Any bulk/third party entries will be disqualified. The winner shall be drawn at random from all eligible entries. The winner shall be notified via email and will have 14 days to confirm that they wish to accept the prize. Should the winner fail to respond, then a new winner shall be selected at random from the remaining entries. The winner's details will be shared with the promoter for the purpose of prize fulfillment, which shall be sent directly from the promoter. Please allow up to 28 days for delivery. There is 1 (one) prize of an Aquabeads Animal Friends Set.
Posted by It's A Family Adventure at 18:11