Well yesterday was a day filled with celebrations for my son Riley who enjoyed his 4th Birthday! He has been counting down since the beginning of January and was so excited to wake up yesterday morning and celebrate his special day with family and friends.

We began the day by gathering in the living room at 6:30am despite my best efforts to get him to sleep in just that little bit longer. We had placed all his presents in front of the fire, and he excitedly opened them one by one. Riley loves pretend play and at Christmas he received a wooden kitchen set from Santa and so we had purchased some new wooden toys to complement this including a wooden cake stand with pretend cakes, a wooden toaster set, and some play food. We also bought him the Rumble in the Jungle book that he has mentioned a few times since starting nursery, along with a new pair of trainers, a chefs outfit, shopping till, a post office playset and some jigsaws and games. 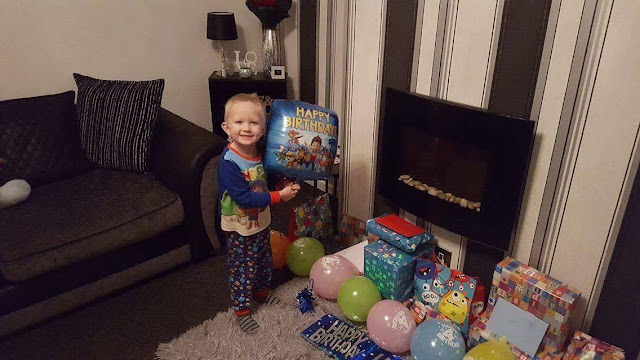 We often struggle with what to buy him with it only being a month since Christmas, but with plenty of pretend play toys out there at reasonable prices, it was a lot easier this year and he was delighted with all his gifts.

Next was the family tradition of cake for breakfast! To be honest I often get quite tempted to do this anyway regardless of whether its a family birthday or not, with the argument being that it must be someones birthday somewhere, however for the kids this is only "approved" on official family birthdays! 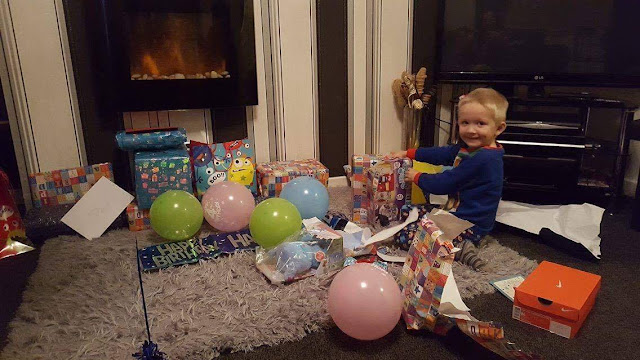 Riley was on the afternoon nursery session so it meant that he had all morning to play with his new toys. He was also really looking forward to seeing his friends in the afternoon, and so we popped out to Asda just before nursery to go and buy some cupcakes for all his friends. His nursery group is only small with about 10 children in the class and they are all such lovely children that it makes me happy to know he has such a lovely group of friends. He has always been quite shy when it comes to mixing with other children, and so it has been great to see him build friendships and watch his confidence grow. The fact that he couldn't wait to get to school made me smile and he was so excited to take his cakes in to give to his friends.

Neither of my other two children have had their birthdays in school time, as Emma's always falls in October half term, and Ben's is always during the Christmas holidays, so I was unsure if they would do anything special or sing Happy Birthday. When he came out of school he excitedly told me all about his afternoon and how everyone had sang to him, and that he had been given a birthday balloon and sticker. He felt so proud showing off his sticker and informing everyone that it was his birthday. I was so pleased that they had made the afternoon special for him. 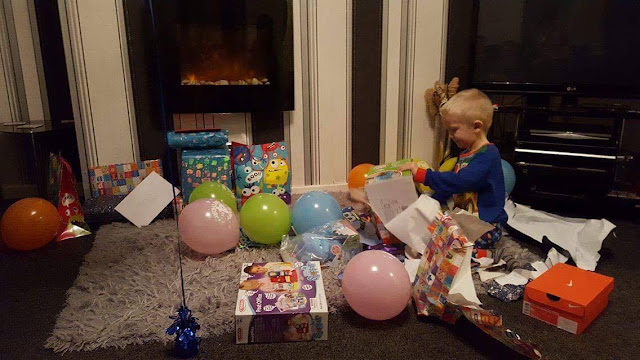 After school, we headed to Nana and Grandad's house where he received even more presents (Flashing Paw Patrol wellies, pyjamas, lunch box & juice cup set and a Paw Patrol activity book). Grandad had decorated the dining room for him with banners and balloons and Nana had made an amazing hot and cold buffet feast.

I had asked Riley a few weeks ago whether he wanted a party, but he had said that he just wanted a family party so that was exactly what we did. He was very specific about which food he wanted there and had given Nana a list beforehand of his food demands and had also instructed her that he wanted 2 games of pass the parcel. (Of course he won both games). Grandad became the resident DJ in charge of the music, and we had a great time dancing, singing and eating!

Riley said that he had an amazing day, and cannot wait until his 5th birthday party so that he can do it all over again! Happy Birthday Riley!
Posted by It's A Family Adventure at 19:08