Well, we still haven't quite got over the excitement from last night, where we were fortunate to attend the opening night of Disney on Ice presents Frozen at the Liverpool Echo Arena. It was fantastic to see so many children ready to enjoy themselves with the majority dressed up as their favourite Frozen characters. We spotted some amazing Olaf and Elsa costumes whilst waiting to take our seats, and it was a really fun and relaxed atmosphere to be surrounded by.

We began our exciting evening out by catching the train from North Wales to Liverpool. It only took us 45 minutes with a change in Bidston and both trains were relatively quiet when we travelled at 3:30pm so there was no worry about trying to find some seats. Under 5's travel free on the train so it only cost us £10.50 for 3 of us for a single way fare. My husband drove there straight from work and met us at the venue after parking in the Waterfront car park which cost £7 which I felt was reasonable for venue parking in comparison to other places we have visited. 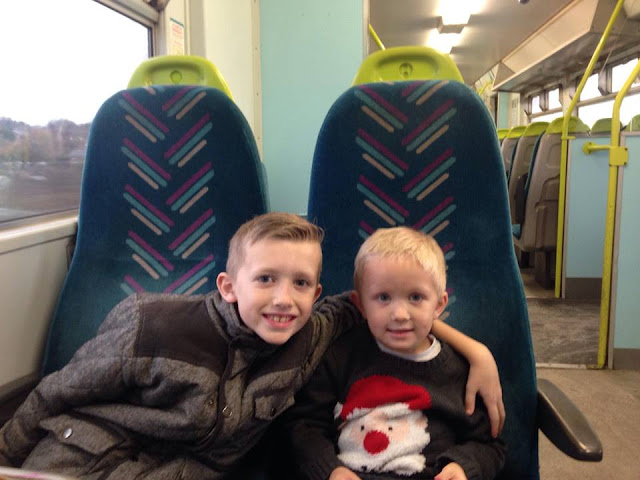 The Liverpool Echo Arena, is my favourite entertainment venue for many reasons. The first being the location as Liverpool is such a fabulous city, and the setting on the waterfront is just perfect. I absolutely love it in the summer, but in the Winter it is so pretty with all the festive decorations and twinkling lights everywhere. We saw some fabulous displays on our walk from James Street station to the venue, which felt like an attraction in itself. There are plenty of restaurants and other attractions nearby, so if you have the time you can make it a lovely family day out.

My second reason for loving this venue is quite simply the people that work here, we have never had a bad experience with any of the staff and have always found that they take great pride in their jobs and offer fantastic customer service and hospitality to their guests. An example of this last night, was when I was carrying my son out of the venue when the show finished (and my husband was laden with coats and bags), and without asking, a member of security walked ahead and opened the doors for us. It is little things like this that can make a big difference to a families experience because as we all know it can be quite stressful taking toddlers out and about, so every little bit of help is often appreciated. 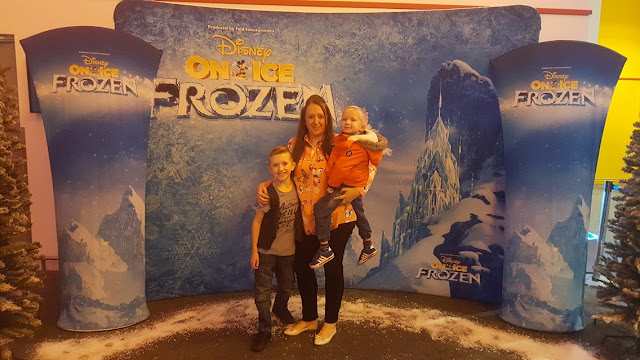 After arriving at the venue, we were really excited to have the opportunity to meet Elsa, Anna, and the amazing Mickey Mouse. The costumes were amazing, and despite my son's earlier declaration that he no longer liked girls, he was ultimately delighted to meet his favourite characters from the show. It was also great to see so many local celebrities attending in support of the show, and I also enjoyed the opportunity to meet some other bloggers and their children. 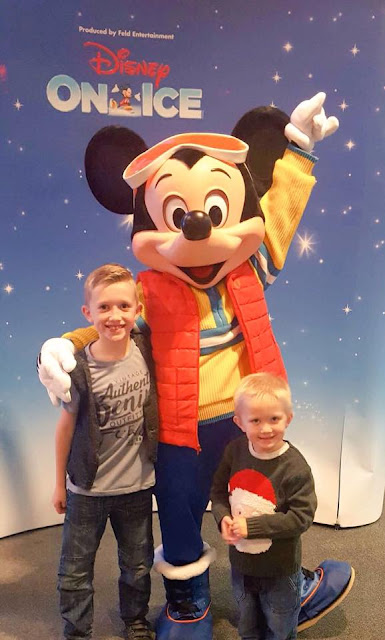 Shortly before the event started we took our seats. The tickets said upper tier and my immediate thought was 'Oh no I've forgotten my glasses" however the seats were actually fantastic and we had a brilliant view. The seats are tiered appropriately as well, and by this I mean that your children can see from their seats regardless of if an adult is sat in front of them. This is one of my biggest annoyances in other venues where you then have to spend the entire show listening to your child declare that they cannot see anything over and over again due to the 6ft person seated in front. It definitely wasn't an issue with these seats though, and there was also sufficient room in front of the seats for children to get up and dance along with the show.

The entertainment began with a mini 10 minute show promoting the new "Fit to Dance" programme, which encourages children to get fit and active by creating their own stories and displaying them through dance. We learnt the Snowman dance, and my son loved the part where you had to "Put your hands around your middle and Wiggle Wiggle Wiggle".

The two Fit to Dance instructors then introduced some all time favourite Disney characters which included Mickey Mouse, Minnie Mouse, Donald Duck, Goofy, Ariel & Eric, Cinderella and Prince Charming, Timon and Puumba, and Marlin & Dory. My youngest son Riley was delighted by this, and thought it was hilarious when Goofy kept pretending to fall over. The dancing was fantastic, and the ice skaters exhibited some amazing skills which were fascinating to watch. We are lucky to have an ice skating rink nearby so my eldest son started asking straight away if we could go ice skating at the weekend, which I don't mind as it is great to see kids be inspired to try something new and this was just from the opening ten minutes. 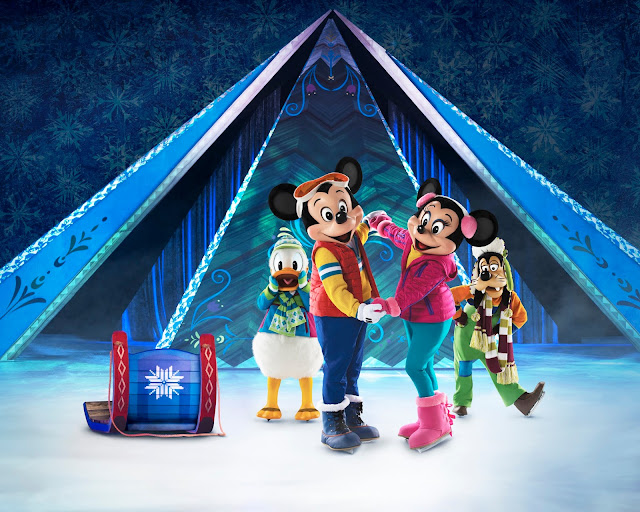 The main part of the show then began and we were introduced to the Kingdom of Arendelle, and the young characters Anna and Elsa. Whilst playing happily in the snow Elsa accidentally hurts Anna and vows never to do it again, and she hides away fearing that she is unable to control her powers. The way that this was portrayed was simple enough for children to understand, yet also displayed great technical skating which made it great for both the children and adults to watch.

As the story continued we saw the kingdom prepare for Elsa's coronation, and this was one of my favourite parts of the show as I love it when there are numerous dancers involved and the choreography looked amazing. During the coronation celebrations Princess Anna meets Prince Hans, and despite only just meeting, they hastily fall in love and Princess Anna accepts his wedding proposal. This scene is accompanied by the lovely song "Love is an open door" and it was a really nice piece of ice dancing. Queen Elsa forbids the sudden marriage however, and in an outburst of anger she plunges the kingdom into an enternal winter. Princess Anna then embarks on a magical journey to find Queen Elsa, fix their relationship and put an end to the winter.

The show then takes you on an amazing journey with Princess Anna on her quest, where she meets Kristoff and Sven who help her on her journey. The first half also featured the iconic "Let it Go" song and it was great to hear everyone singing along including parents! 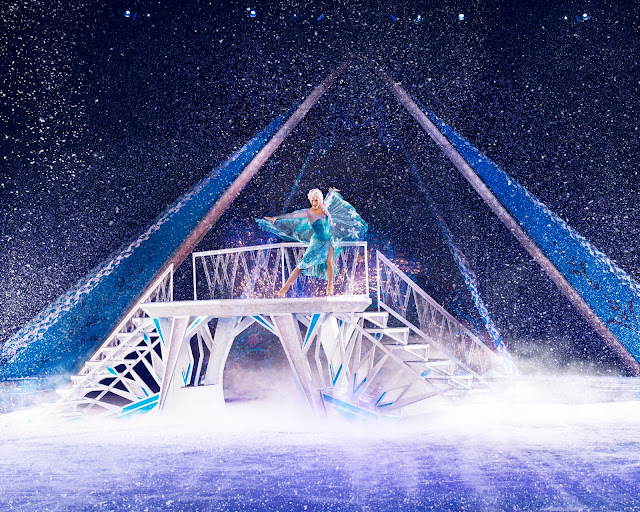 There was then an interval of around 15 minutes, which gave the chance for snacks & toilet breaks. There were plenty of facilities within the venue so the queues weren't too long and my husband and son both managed to get back to their seats with plenty of time to spare.

One thing I would like to highlight about the show is how relaxed it is for families. All the children are up singing, dancing and chatting along, and so it makes it much more comfortable for parents who don't have to keep telling their children to sit down or be quiet. My son liked to switch seats regularly throughout the show with his brother, and would intermittently swap from my knee to his dad's knee too, but we didn't need to worry about him bothering any other guests as most children were up on their feet anyway.

The second half featured my absolute favourite performance of the night which came from Olaf and his "In Summer" song. This was a fantastically choreographed piece which was both entertaining and mesmerising to watch. There was obvious laughter throughout the venue when Olaf first came out onto the ice and it was quite clear that children loved him. 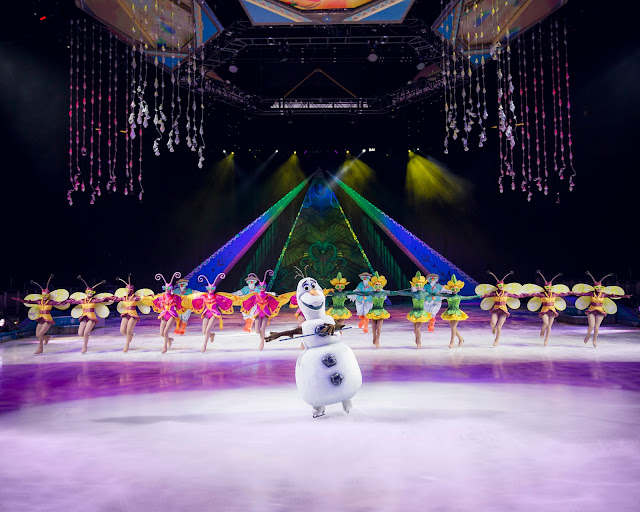 The show also featured an excellent display of remote controlled features, including the spectacular scene of the Marshmallow Ice Monster which grew larger and larger. My son was a little bit scared during this part, but I think that this was a combination of the monster and also feeling tired. I personally found it interesting to see remote controlled objects used amongst the ice skaters and felt it was a great use of technology.

Another aspect of the show that my children loved was the snow. The scenes were frequently filled with snow falling from the roof which helped to make it feel really magical and wintry. It made me look forward to hopefully seeing snowfall this winter, especially on Christmas Day, now wouldn't that be great!

Overall we had a fantastic time, the show was captivating from start to finish and I can only imagine the amount of hours that the performers have to put in to rehearsals to make such a great show. The standard of ice skating and choreography was exceptional and I enjoyed the fact that the dancers made full use of the ice so you could get a great view from wherever you were sat in the audience. I also appreciated the fact that they had incorporated some of the favourite Disney characters into the show, as although it was Disney on Ice presents Frozen, everyone loves Mickey Mouse! My youngest son being only aged 3 did get a little sleepy towards the end of the evening, however there are some 10:30am and 2:30pm shows during its run at the Echo Arena which I would definitely recommend if attending with babies and toddlers.

There are still some tickets available and it is running until the 4th December so if you would like to purchase tickets for the show, or find out more about the production then please visit:

www.disneyonice.com or www.echoarena.com
Alternatively you can contact the Echo Arena box office on 0844 8000 400
A full list of tour dates can also be found on the Disney on Ice website here: Disney on Ice 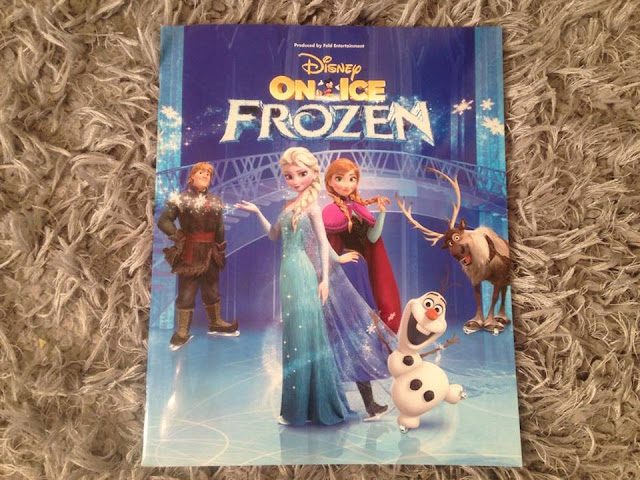 *Disclaimer - I was provided with complimentary tickets for the purpose of providing an honest review of our experience. Any opinions expressed are my own.