As Remembrance Day draws closer, I felt it was important for my children to understand why we do commemorate this event, and just exactly what the poppy represents and stands for.  Every year in school my children always purchase and wear a poppy, and they have also taken part in the local remembrance parades, but I was unsure as to whether they actually understood what the significance of the poppy was, and the history behind it. 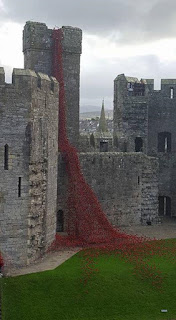 To help them gain a better understanding, my husband and I decided to take them to visit the wonderful 'Weeping Window' poppy display which has been installed at Caernarfon Castle for a 6 week period. I thought that by visiting such an outstanding art installation, it would provide the perfect opportunity to talk about the history, as well as remember the fallen, and write a remembrance message for members of our own family. 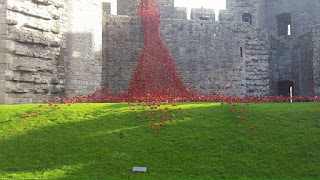 Remembrance Sunday always falls on the second Sunday in November, which this year is the 13th November 2016.  It is a day where we remember those who have suffered or died in war, and is to honour their memory and appreciate the sacrifice they made in order to protect our freedom. It is not only to commemorate veterans from the first and second world war, but also wars and conflicts from more recent times. 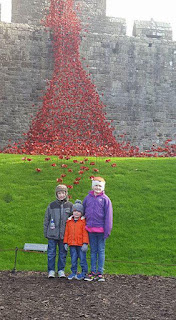 During the First World War (1914-1918) the beautiful countryside that was fought over, turned to mud where little or nothing could grow. However, despite this, the resilient poppies flourished in their thousands and inspired the poem 'In Flander's Fields' written by Lt. Col John McRae. This poem became the inspiration to make and sell red silk poppies, and when they were brought over to England, the Royal British Legion which was formed in 1921 ordered 9 million of them to sell. The sale of the poppies raised £106,000 which of course was a very substantial amount of money for this time. This money was then used to help WW1 veterans.

There can at times, be some misunderstanding as to what the wearing of a poppy means, with some people believing that there is some kind of political reasoning behind it. This is incorrect, as the poppy stands for a symbol of remembrance and hope, it is not a reflection of politics or religion, nor is it a sign of support for war.  Millions of people every year choose to wear or not wear a poppy through personal choice and the purchase or wearing of a poppy is never forced upon people, but is simply an individuals preference to do so, often to reflect personal memories and to also help raise funds for veterans in need of support.

Two minutes of silence is also observed on Remembrance Sunday, as well as on Armistice Day itself on the 11th hour, of the 11th day of the 11th month.

The Weeping Window display is by artist Paul Cummins, and designer Tom Piper, and is a beautiful cascade of several thousand handmade ceramic poppies. They start from one of the high windows of the castle and flow down to the ground below.  The tickets are free of charge and due to the popularity of the display, it is recommended that you book in advance. We visited today (Saturday 5th November) and despite it being very cold, with intermittent hail storms, it was still very busy. 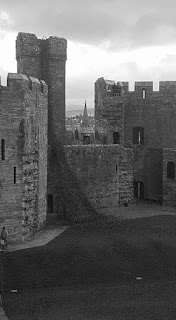 There are also a couple of remembrance areas, the first being where you can write a card and pin it to an indoor display, and the other and most striking area, is towards the opposite end of the castle where you can purchase a poppy cross and place this in the ground. 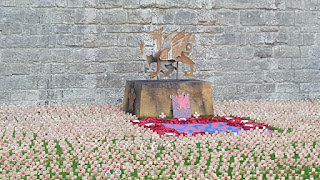 The Weeping Window art installation will be at Caernarfon Castle until the 20th November, so if you would like to visit, please visit the site here to arrange your tickets. Tickets

Additionally, if you would like to make a donation to the Poppy Appeal, or learn more about it, then please visit their site here: Donate