Family Fun with Stoopido - A Review

We are big fans of fun family games that get you giggling, and so we were absolutely delighted to be offered the opportunity to review this fab game Stoopido, which is sure to be a popular addition to children's Christmas lists.

The game is made by Drumond Park who already offer a whole host of games to the market, but the fun and silliness of this particular one, had us keen to find out more! 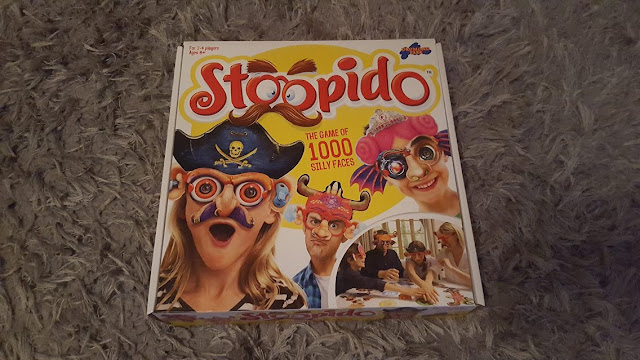 The packaging for this particular product is really eye catching, bright and colourful, and features a selection of funny faces on the front of the box. It is recommended for 2-4 players, and for ages 8+. You can already gain a good idea of what the game involves from the images, so you can tell straight away whether it looks like a game that would appeal to your family.

The reverse side of the box, shows you a visual guide as to where the pieces attach onto your glasses, along with some brief instructions informing you of how to play the game. Along with this is a list of contents, the manufacturers contact details, and an important notice that the game is NOT suitable for children under 36 months due to the small parts.

I could already tell from the packaging alone, that this game was going to be hilarious! 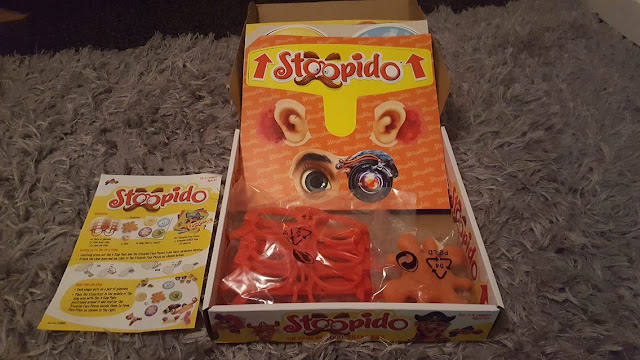 Inside the box, there was a bag containing 4 pairs of red glasses and 15 plastic clips, a bag with the Stoopitoot (love this word) and dice inside, 1 sheet of card featuring the 4 slap pads, 25 x Stoopido face pieces, 1 Stoopido Loser Sign, and the all important instructions. The Stoopido face pieces, slap pads, and loser sign, are featured on 6 sheets of card, and you simply just press them out to get all the individual pieces. 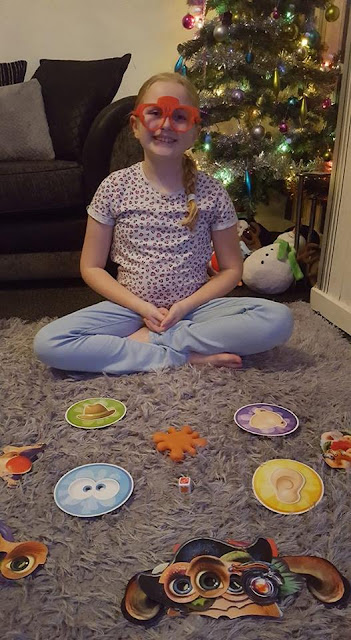 We began by pressing out all the pieces from the cardboard sheets and attaching the nose and ear clips to the face pieces. My children's first instinct was to try and make the funniest faces they could, before even starting to play the game, but then we sat down and my daughter read out the instructions. Although recommended for over 8's my youngest son (nearly 4) was also keen to get involved too and I was happy for him to do so, since I was playing aswel and could keep an eye on him.

We each put on our pair of glasses and then placed the Stoopitoot in the middle of the floor with the Slap Pads surrounding it and then spread the face pieces around and we were ready to play!

To begin play, you simply roll the dice, and see where it lands. If you land on a Nose, Eyes, Hat or Ears image, then the first player to touch the corresponding Slap pads wins that round. The winner of that round then gets to pick a Stoopido Face Piece and add it to the glasses of ANY player that doesn't already have a face piece of that feature. So for example you couldn't add a nose to someone that already has one. If you roll the glasses side of the dice, then this unfortunately means that the player to your left can add a feature which you don't already have to your own glasses, and lastly if you roll the Stoopitoot then the first player to squeak the Stoopitoot can choose to either pick a Stoopido face piece of any feature and add it to any players glasses, or they can remove a feature from their own glasses. 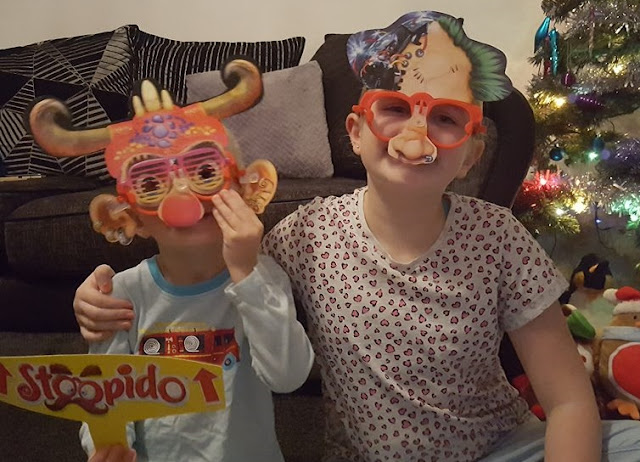 If you win a round and each player already has the piece that you rolled then you can remove this piece from your own glasses. Once a players glasses are completely full then they are the LOSER and out of the game and have to sit there looking hilariously ridiculous!

The aim of the game is to be the last player left without a full Stoopido face on their glasses. For added fun you can take pictures of all the other players that lost holding the Stoopido Loser sign.

After reading the instructions a couple of times we began to play. I had been a little worried that it sounded a bit confusing, however once playing it all became really clear and the game is very easy to follow. It was so funny seeing each others funny faces and being able to choose what we added to each others glasses. My son especially liked the "Bogey nose" piece, ewwww! We played it a few times together and loved the fact that there are so many different combinations that you can make, so the game is never the same as the last time you played it, with everyone looking ridiculous on a whole different scale, each time we played.

I also loved the fact that no-one actually minded losing in this game, as the kids were quite keen to totally cover their glasses as quickly as they could just so they could see how silly their Stoopido face was. This helped to make it much more enjoyable, as my children weren't as competitive and as a result it prevented arguments, that can often arise when playing a more serious game. 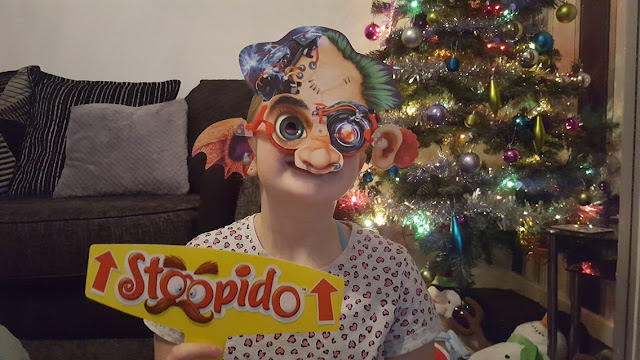 Would I recommend it?

Absolutely! If you enjoy family time and a good giggle then this is the game for you. It has an RRP of £17.99 which I think represents good value as it can be played over and over again without becoming boring, due to there being so many different combinations. If you enjoy your more serious games, that involve some element of skill then sadly this game would not be for you, however I believe that everyone enjoys just relaxing and being silly with the kids every now and again and I am sure that many families would really enjoy this product. In fact, we enjoyed this game so much that I have decided to also include this in my Christmas Gift Guide for Children which I will be posting at the beginning of December, so make sure you check back to the blog soon to see what else we will be featuring.

If I was to change one thing, it would be that I would have preferred the dice to have been a bit larger, as sometimes it was hard to see which feature it had landed on, especially the yellow side, but we soon learnt what colour represented which feature. I would have also have loved to have had a fold-able picture frame included so at the end of the game you could take a picture with you all in it like a portrait.

Disclaimer - I was sent this product for free to provide our personal review and opinion on this product. This review is my honest opinion of our experience with the game.


This product is available to buy from Amazon, and other good retailers. The link above is an affiliate link which means that if you choose to purchase after clicking, then I may receive a small commission. These small commissions help me to run this site and provide great content for my readers.
Posted by It's A Family Adventure at 20:09