A Review of our Adventure to Stonehenge

Stonehenge has always been somewhere that I have wanted to visit, but as we don't venture down to the South of England too often, we hadn't found the opportunity to do so, and so I was really pleased when the children wrote it down on their list of places that they wanted to visit over the summer.

They had been learning all about roundhouses in school and Stonehenge had been mentioned and so it was something that was a current interest in their minds, and so I jumped at the chance to add this into our travels. 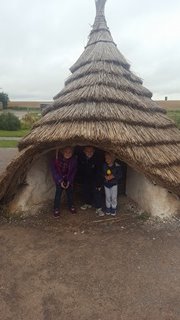 The historical site of Stonehenge is located in Salisbury, and on the approach we could see it quite clearly in the distance much to the childrens excitement. On arrival, we found the car park to be well organised. I didn't realise how popular it actually was to visit, and although we arrived early at 10am the site was very busy with queues to get both into the car park, and into the site itself. The queues were handled very well and quickly though and we were soon parked up and ready to commence our visit.

I joined a short queue at the main entrance to collect our tickets and we were greeted by a young man, who was very pleasant and helpful. He recommended that we viewed the exhibits in the visitor centre first before making our way to the buses that carry you to Stonehenge. I hadn't done much research prior to our visit and so I was pleasantly surprised by the indoor visitor centre as I had not been expecting this, and had thought, probably rather naively, that you simply walked round the stones.

The visitor centre exhibits are very well laid out, and despite being a very busy attraction, it never felt too crowded or that people were fighting for space to view things. It was very informative, and my kids really enjoyed seeing artefacts from many years ago. One fascinating part of the centre was the discovery of a skeleton, and although this may not seem extroadinary at first, it actually really is. With the use of modern technology, they have managed to produce an extremely lifelike face of what the person would have looked like which is so clever and was really amazing to see. Based on science and close analysis, they were even able to provide his approximate age at death, the date period that he died, his height, weight, the fact that he was right handed, and they could even tell that at some point during his life, he suffered an injury to his leg. Isn't science amazing!

Several other exhibits focused on the tools that inhabitants would have had in that era, and how they would have used this to help make equipment and ultimately homes.  In addition, the exhibits also delved even further into the past and looked at what the area would have been like before Stonehenge existed.

Each exhibit offered both written information and visual pieces, and on exhibit I did find very interesting was the focus on how Stonehenge was actually built. I will be honest when I say I hadn't given much thought to this previously. It was a historical monument that I had always wanted to see, but I had never really thought about the realism and historical facts about it all. The stones weight a remarkable 30 tonne, and are believed to have been transported to the site by boats from South Wales. Once on land they were then carried on timber sledge with rollers and dragged. This would have taken tan immense amount of effort and would have involved 100s of people to do this.  It really is an amazing piece of engineering for its time.

The exhibit then goes on to explain that the stones would have then been worked into shape using hammerstones before being joined together using joints most often found in woodworking. 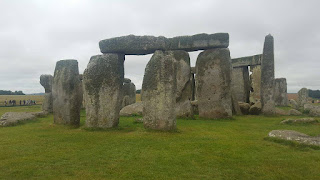 As we made our way out of the visitor centre, my children were delighted to see a selection of roundhouses. You werent able to go into these houses but you could view inside and they did provide nice photo opportunities. I do love exhibits that make the children think about the things that they have in their lives, their home, their toys, their garden to play in, and their education to name but a few. They were shocked to think that whole families would live, eat and sleep in these little houses, and it does help them to appreciate just what they have. 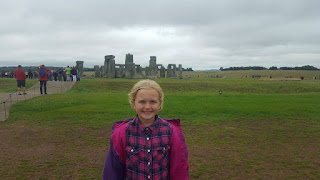 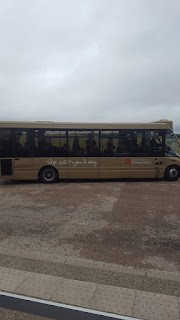 There was also an extremely large stone, which seen close up gave you a much better idea of the size, scale and weight of the stones. After the kids had posed for some photos by this, we made our way over to the buses. I had suggested to my husband that we didn't need to get the bus and we should walk. I am glad that my husband talked me out of this, as it was much further than I had expected and took about a 5 minute journey up a gradual slope on the bus. We passed many other walkers on the bus that looked tired, and so I was glad that we had chose to opt for the bus instead. This took you straight to the entrance point of the stones where you followed a guided walkway around.

One thing that I didn't like about the bus, was that they fill it full to capacity. We were not lucky enough  to get seats on either journey and I did feel uncomfortable having to stand on a very crowded bus with a toddler. As I had my tickets, purse and bag in one hand and was supporting my son with the other, it was very hard to steady myself. That being said though it is only a short journey and I do understand why they do this when the site is so busy.

On arrival at the stones we began to follow the route around. We noticed that many of the tourists had opted for the audio tour, however we had chosen not to do this, as the children like to travel around at their own pace and so I felt we wouldnt be able to enjoy or listen to the audio tour fully.

The sight of the stones really is spectacular, and again, even though it was extremely busy it didn't feel too crowded at all. We took a leisurely walk around the stones and took in the information at various point where there were display stands of information and facts. One thing I did really enjoy, was meeting so many people around the site. There were tourists literally from all over the world and it was great to here about where other visitors had travelled from and why. Everyone seemed to be having a great time taking photos and enjoying all the history of the site. 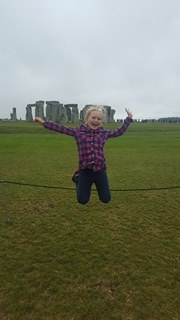 In total we spent around 2.5 hours at the attraction. We could have stayed and enjoyed it for much longer, however unfortunately the weather was not on our side, and during the course of the morning it had become very cold, windy and wet, which are three combinations my children don't enjoy.  We did however manage to have a quick wander through the shop which seemed to offer most touristy items you could think of, along with a nice selection of homewares. There were a variety of pocket money priced items, as well as much more expensive things but there was certainly something there to suit every taste.

When we returned on the bus, the queues were nearly double the size they were when we had departed, and so I would definitely recommend visiting earlier in the morning if you can, though the buses are very frequent so I would imagine that they get through the queues as quickly as they can.

Overall, I would highly recommend a visit to Stonehenge. We really enjoyed our morning here and I found the site both interesting and fascinating. My youngest child who is 3 also really enjoyed the visit which surprised me as I had been worried he would be a little bored, but he enjoyed all the exhibitions as much as all of us, which in general made it a great family day out. 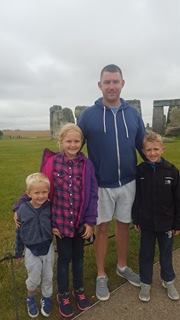 The entry prices are reasonable and cost for an individual adult ticket is £17.10 with gift aid, and £10.30 for a child ticket (aged 5-15) with gift aid. Value tickets are available for families at a cost of £44.50 for 2 adults and up to 3 children, and there are also concessions available for the elderly and students at a cost of £15.40. These prices are for online ticket purchases only and are subject to change. Walk up prices are slightly higher than those listed above. If you would like to book tickets online please visit the English Heritage Stonehenge website here: English Heritage Stonehenge

*Disclaimer - I received a complimentary family ticket in exchange for an honest review.
Posted by It's A Family Adventure at 15:03