It's Shaun the Sheep!

After a busy day, I had finally just sat down on the sofa to catch up on the soaps. It was 8pm and the kids were doing some drawings quietly upstairs. It was a lovely moment of peace and quiet, though quite literally just a moment!

Ben came down to show me his latest masterpiece and then casually asked, "Where are the cakes for school tomorrow?"."Cakes? what cakes?" I asked. "Its the school fair tomorrow" he said, "We need to take in some cakes for them to sell!".

Now I admit it, there may have been a letter lurking in the depths of the children's school bags, and there may have been some not too gentle reminders on the schools twitter account, and the kids may have mentioned it a few hundred times before, but the reality was I had completely forgotten! 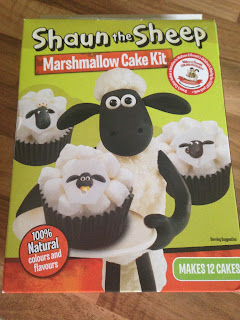 I knew I would be in a rush in the morning, and so an early morning trip to Asda to cheat and buy some ready made cakes was out of the question, so I quickly jumped back up, and started to raid the kitchen cupboards.

I then remembered that I had recently won a Shaun the Sheep Marshmallow Cake Kit from a competition that was held on Twitter by the Metro, and that I had put it away for a rainy day.  I moved a few cereal boxes out of the way, and there it was in all its glory waiting to save the day!

The cake kit itself is part of the Green's cake kit range, and as a family we have used many of these kits in the past and so it was a brand name that I knew I could trust in terms of quality. My daughter likes to read absolutely everything, so she was in charge of reading out the instructions, and she lay out the contents of the kit on the worktop ready to use. In addition to the kit, all you need is 1 medium sized egg and some cold water. Luckily we had some eggs in the fridge, and like most households we have a tap so it took just a quick minute to get everything ready, wash our hands, and then we were good to go! 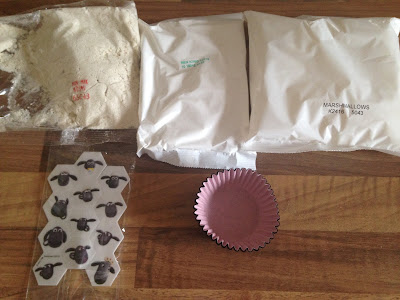 The kit includes a Vanilla cake mix, an Icing mix, Mini Marshmallows, waferettes and cake cases. Firstly we laid out all the ingredients and made sure we had everything to hand. Next, my daughter started us off on the first of the six step instructions. I set the oven for 160 degrees, whilst Emma and Ben lay out the cake cases on the baking tray. 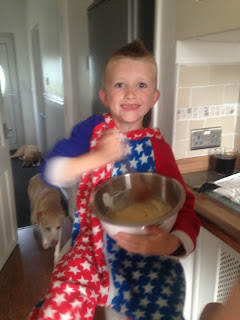 Next we mixed the cake mix, egg and 35ml of cold water in a bowl until it was creamy. The guide on the box states this should take around 2 minutes which is probably quite accurate, but with us all having a go, and taking it in turns we took a little longer.

Next we spooned equal amounts into the cases. Usually I find that we put too much in the first few and not enough in last, so we were quite cautious when dividing it out. We needn't have been though as there was a good quantity of cake mix and so it was easy to separate it evenly very easily. We then popped them in the oven for 12 minutes, watched them rise and then left them on a cooling rack for a further ten minutes. 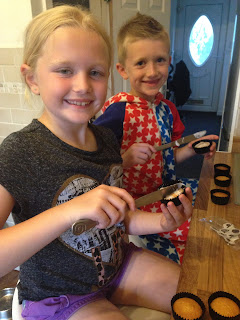 Once they were ready, we put the icing mix in a bowl added 2 teaspoons of cold water and mixed. I added a further half a teaspoon to make the icing slightly more spreadable and easier for the kids. I then gave each of them 6 cakes each to decorate themselves. We initially tried using two mini spatulas to do this, but Emma and Ben found it much easier to use a normal dinner knife. The box recommends that you do one cake at a time, and so we took the hint and did just that.

Once the layer of icing was done, it was time for the fun part, creating a sheep! Emma and Ben both did their first layer of mini marshallows, then added another thin layer of icing on top, followed by a second row of marshmallows. They then added a small dot of icing on the back of the waferette and positioned this onto the cake so that the face was at the front with the bulk of the marshallows behind it. Ben was the first to finish and informed me that as this was his first, it was technically a tester, and so he would be eating it! 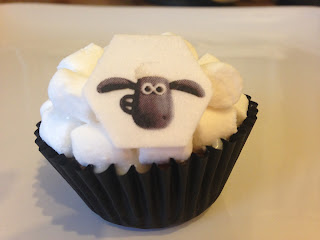 Before long our single sheep, was soon part of a fantastic flock, which all looked fantastic! 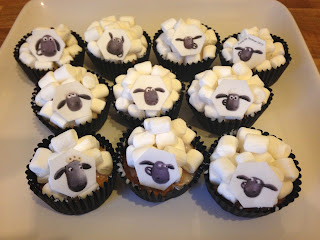 Emma and Ben each ate one to test them out, and we also saved one for their little brother Riley before neatly arranging them in a cake tub for the school fair. 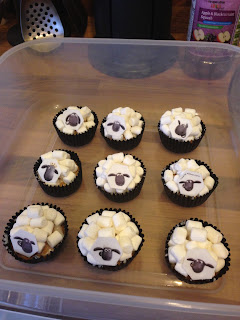 On the back of the packaging there is a cut out scene that you can also add behind your cakes for added effect, however we chose not to use this as the school would have simply removed it. Instead we cut it out and gave it to Riley the next day who has a few Shaun the Sheep toys and he enjoyed laying his toys out in front of it.

I am sure you will agree that the cakes look Baaaarilliant, sorry I couldn't resist, and although I didn't try one myself, the kids said that they were delicious. I think that their smiles and empty cake wrappers back that up. 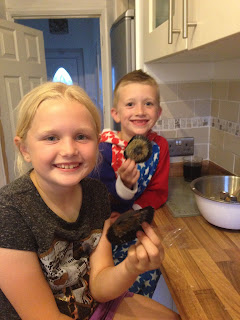 Overall, I was very impressed with the kit. The instructions were very easy to follow, and the marshmallows added a new fun element which was a nice change to just placing waferettes on icing. The mix was enough to make 12 cakes as stated, and we found that there was more than enough icing sugar to do two thin layers on each cake.

Green's also offer an informative website, that provides clear pictures of their products, nutritional information and also a store locater.

We would love to hear your comments on this blog post, so do please feel free to leave us a message below.

Thanks for reading! xx

Disclaimer  This post has been written based on our own honest opinions and experience of this product. We are not affiliated with Greens in any way and have not received any form of payment for this review.

Posted by It's A Family Adventure at 19:23 No comments: